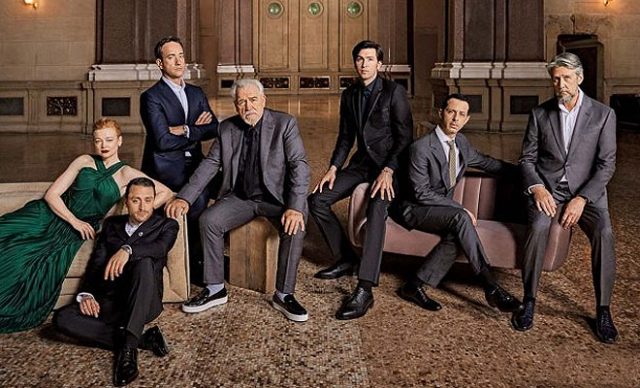 This is black stuff. This is nasty. Rumoured to be a quick backward glance over the shoulder at the Murdoch family, the Roy nuclear gathering is primed, lit and barely outrunning the explosion of its own sociopathy.

These people take arseholery out for a long stompfest, leaving the moral compass where they believe it belongs – in the loathesome hands of the squeamish.

This is satire as good as it gets. So wry and acid it seemed like it took three EPs before someone actually smiled, and only then at the misfortune of some loveless sad sack also-ran. Whilst looting the business world for profit by any means, the four spawn of patriarch Logan Roy have a continuous weather eye out for getting their privileged [and entitled] arses onto the big seat. When Logan suffers a stroke, it’s on.

Son Kendall [Jeremy Strong] thinks his iced robot impersonation will do it. Daughter Shiv [Australian Sarah Snook], named after a common prison weapon, knows it won’t, as does next son Roman – an edgy ode to irresponsibility turned in by Macauley Caulkin’s little brother Keiran. The eldest son, Connor appears to be a batshit dreamer, but his DNA is closer to that of the old man than first appears.

Could only be written by a pom – Jess Armstrong [Peep Show] – Succession is an HBO outing, but now available on Apple TV for a modest investment for those of you who prefer not to encourage greedy Rupert and his fawnsters over at Foxtel. JD

YARRAVILLE FILM-MAKER ‘PITCHES’ IN DURING LOCKDOWN