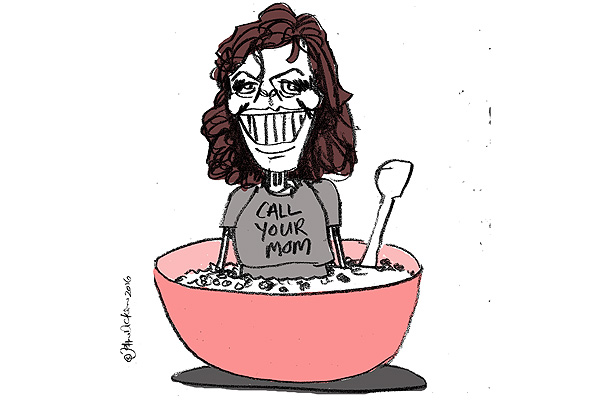 This is a community announcement: I spent money on seeing The Meddler, so you won’t have to.

Susan Sarandon limps through this cliché-ridden Rich White People’s Film with that coercive smile glued to her gob – ’stick with me, we’ll get there in the end!’ Nah. Unless of course you can stomach a wafty bit of hamfistery, a cherry-picked, cliché-ridden, paint-by-numbers, floss of cake-mix bowl scrapings.

Quick summary. Recently widowed mother with time on her hands and money to burn [a conflagration as it turns out] follows dizzy daughter to LA and proceeds to interfere with her self-loathing in ways where Real People might find themselves reaching for a baseball bat.

Unsuccessful here, she reaches out to daughter’s friends and gathers them under the shower of her endless wealth. Unlike daughter, they comply with ready greed, and lay on the sugar by the truckload.

As a side dish, she patronises a young black guy by gifting him the means [and transportation – she drives him every evening!] for an education – his first step on the yellow brick road. He is a Mac Genius she discovered while looting her local Apple store for gifts for everyone, thereby making the nexus between old farts and new technology and quietly boosting the technology giant’s cred. Susan Sarandon spruiking Apple? Cheap at twice the price.

Our Rose is the daughter, Lori. Crawling away from a failed relationship with TV star/hunk Jacob, she chooses the whiney, head under the doona, thumb-sucking acting method, slapping away mummy’s excruciating blandishments with all the force of a sodden kleenex. She is, of course, a Talented Writer with money and housing and clothes on her back. And she’s beautiful, so don’t you worry about that.

She drives a Lexus. As does mummy. And when they’re not driving Toyota’s top shelf, they make do with lesser models [it’s ok, these are rentals – not permanent fixtures outside their considerable real estate]. A Lexus for everybody!

It may surprise you to learn that people of colour are represented as worthy causes, salt-of-the-earth yeomanry, or in one case, a bit of a bitch. And this clunker’s riff on gay marriage is a cringe-worthy centrepiece in a massively failed attempt to dress up something complex in the trappings of white middle class [WMC] simplistic sensibilities, thereby squishing the debate. Nothing to see here.

Needless to say, mum finds romance in the arms of hard-boiled, soft-centred [headed] ex-cop chicken farmer, Zipper [cue salacious gag] – a role JK Simmons sleepwalks through, clearly spent after his psychotic outing as the unhinged bully in the nasty Whiplash, and we are treated to the pair chawing on each other’s faces, as the sun goes down. Oooh.

And there it is. The circle is complete as daughter serial calls her mother’s phone, to no avail – the oldies are romping off into the sunset.

So spend your money elsewhere, kids. Hopefully on local performers whose support structure has been rudely ripped away by a government more intent on counting dollars than calculating the value of a homegrown culture.