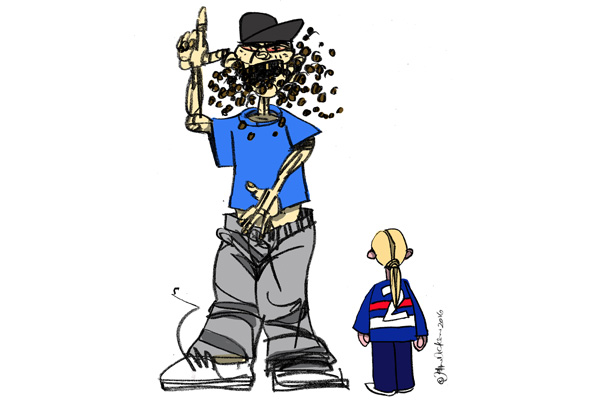 I have a confession. I am a Collingwood supporter. There, I’ve said it.

Saturday night was shaping to be as funless and nearly-sad as the failed, fruitless day it followed, and with the faint but insistent summoning yodel of Monday beginning to gather volume, something had to give.

In the gap, there was the promise of a Fair Dinkum Footy Match between a tidy and tuned Dogs outfit and a resurgent [at last!] Collingwood at the ‘G.

To say that Jan would enjoy a bout of 36 stallions chasing an inflated leather bag, rests in the same realm of possibility that allows that the Trumpet’s quaff is natural. To lobby for this outing, especially when the temperature would barely worry 13 degrees, would be to place the noose around one’s own neck and proffer the loose end to a stern white guy in a pointy hat.

‘Go’, she said, emptying the last of the buttery chardy into her favoured drinking vessel – a handled jam jar purloined from a hipster café in another suburb. The unsaid ‘if you dare’ silently harnessed to that verb, strode across the kitchen and buried itself in my hippocampus.

‘Mayhem* has got a birthday party. Take Meander*.’

Meander, like her brother, is four years odd. She has a large poster of Robert Murphy pinned to the opposite wall from her bed. She laments the captain’s absence from the current Bulldogs line-up and will wax rhapsodic about his ‘silky skills’ given the slightest opportunity.

I am afraid of her.

Sunday dawns and I tell her that we are going to the footy. She barely draws breath before saying, ‘Are you sure you want to come with me, Dad, it will only end in tears’.

See what I mean?

It was going to be a late start, so we enjoyed a lunch of ‘proper’ food, anticipating the culinary crimes that awaited us at The Colosseum. At 2.00pm, Jan dropped us at Footscray station, in readiness for the arrival of the 2.10pm – precisely the time that the day began to unravel.

I heard him before I saw him. The mantra came from over my right shoulder, a concentration of obscenity and racist epithet delivered at machine gun pace and sprayed around without fear or favour. It hosed from the mouth of a baseball-capped, T-shirted, muscled ball, lashing out as he leapt the barrier, bugling from an empty mouth as he prowled the platform going face up with grown men twice his size. Fifty people on the platform, and nobody said a word. Including me. I gathered Meander up, and we climbed aboard the train – the same carriage as this Agent of Disruption.

‘Are you a Collingwood supporter, mate?’ Meander asked him.

Worthless scribes from time immemorial have suggested that at the moment when all light is about to be extinguished, your life flashes before you. All I could see was the blue-eyed squint of this Bad Boy, pupils diminished to pinpricks, blood-shot eyeballs floating millimetres below pock-marked skin, cracked lips peeled back over a gap-toothed rictus.

The packed carriage of witnesses held its collective breath while Bad Boy’s synapses crackled and snapped, trying to make sense of this impudence.

The train pulled into the wastelands of South Ken, the door beside us beeped its opening and Bad Boy vanished. In his place, Belty’s* massive form blocked out the sunlight. Through the now closing door, I could see Bad Boy climb to his feet and begin to sprint alongside the train, continuing his foul anthem and thumping at its windows with a closed fist until a recycle bin halted his momentum.

‘You still owe me three grand,’ Belty said to me, with only the tiniest of smiles as he tossed the end of his Collingwood scarf over his shoulder.

We made it to the ‘G, and while our beloved ‘Pies held the determined Doggies at bay for most of the game, they eventually succumbed to the attrition of battle and surrendered meekly. Belty had stayed with us for the afternoon, but his constant chug-a-lugging from the whiskey bottle he had somehow smuggled in [don’t ask!] didn’t go unnoticed.

As we were escorted from the ground by security, Meander summoned her most baleful stare and said: ‘Well boys, there’s always next year’.

*Not their real names.

ENGAGING IN AUDIENCES IN ISOLATION