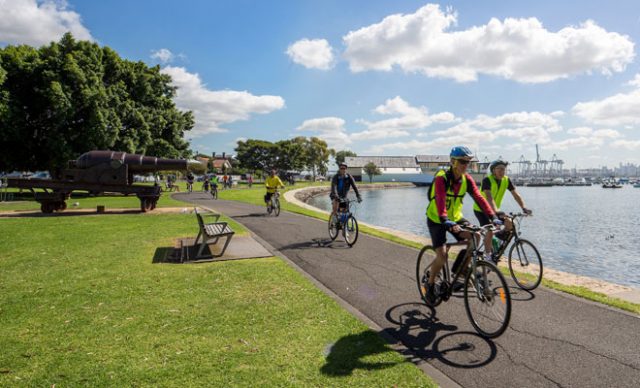 Benefits from the West Gate Tunnel Project are set to flow in the western suburbs before the project is complete, with a $10 million fund available for the inner west to tap into.

The West Gate Neighbourhood Fund is a Victorian Government-funded grants and partnerships program for communities in the City of Maribyrnong and Hobsons Bay City Council. It is designed to bring people together and further improve neighbourhoods during the construction of the biggest infrastructure project underway in the west.

The fund will build on the package of improvements the West Gate Tunnel will deliver including less trucks on residential streets, quieter houses and parks, and new open space and bike paths.

With a tunnel and elevated road connecting the West Gate Freeway to the port, city and Citylink, the West Gate Tunnel Project will change the way roads are used in the inner west taking more than 9000 trucks off inner west streets.

In addition the West Gate Freeway will be rebuilt with four extra lanes and new, higher quality noise walls installed for most of the way between the M80 and the West Gate Bridge.

West Gate Tunnel Project CEO Peter Sammut, said one of main priorities while the project is being built is to support local communities where we are carrying out construction.

“Once complete, the benefits of the West Gate Tunnel Project will be lasting,” he said.

“The West Gate Neighbourhood Fund will mean that there will be additional benefits for the community and these will be sooner rather than later, prioritising those who are most affected during construction.”

Mr Sammut said the West Gate Neighbourhood Fund welcomed ideas that would bring together communities in the inner-west, promoting connectedness and increasing participation.

“The initiative will support projects that encourage community building by bringing people together and providing a significant and lasting outcome,” he said.

A wide range of activities are eligible, including projects that celebrate heritage, history or diversity, contribute to liveable environments, focus on arts and culture, emphasise learning and development, or allow greater participation of community members.

There are two streams of financial support available – grants and partnerships. Both streams will provide funding towards community projects and initiatives, both big and small.

The grants target community groups on initiatives that bring communities together and improve wellbeing.

The partnerships program will fund larger projects of more than $100,000, that deliver a lasting benefit for the community. Councils as well as organisations will be able to apply for partnerships. Co-funding initiatives are encouraged.

The West Gate Neighbourhood Fund will run for financial years 2019-20 and 2020-21 and is managed by the West Gate Tunnel Project team, within the Major Transport Infrastructure Authority.

For more details on the West Gate Neighbourhood Fund and to stay up to date on when applications will open, visit westgatetunnelproject.vic.gov.au/neighbourhoodfund.