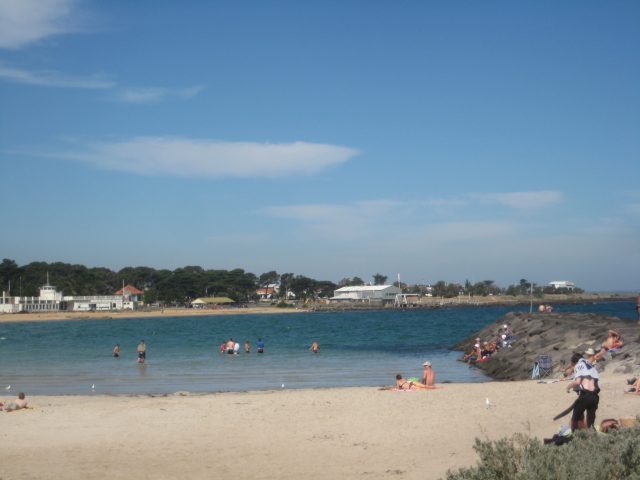 The smell is popping up everywhere I go. At a recent dumpling showdown with friends, an argument broke out about whether it is ‘Creaming’ or ‘Creamy’ soda and then it reached new heights on the difference between brown or red soda, then it went even further as to who made it better: Kirks or Tarax? (In my opinion it’s Creamy, it’s brown and Tarax did a ripper version in a black can with a gold stripe).

As a kid, my brothers and I were only ever allowed soft drink at special occasions. We would have Creamy Soda or Pasito at Christmas and it was such a treat.

The soft drink memories are connected to family car trips from Victoria to Queensland where I would be wedged between my two stinky brothers in the back seat for the whole two day trip. Mum would give us musk Lifesavers to suck on to keep us quiet. I still can’t eat a musk lolly to this day after witnessing my brothers ‘push burps’ for hours in my face until they made themselves sick between Newcastle and Caloundra. Mum would threaten from the front passenger seat; “stop being so gross or we’ll stop the car and you can all get out.” Like that was ever going to happen.

Purchasing some goods recently at a Yarraville milk bar, I had reflections from my childhood. The shop, located on Somerville Road had bright orange lettering on the side of the building, cut out in an early-eighties font, stating just what it was: ‘MILK BAR’. The sign above listed what I might find inside: groceries, newspapers, tobacco. The chime of the bell above the door sounded like it had been making the same music for thirty years. For the first time I noticed the fridge full of discontinued soft drinks (Sunshine Pine) and the exciting miscellaneous lolly selection under the glass counter. I stared for ages, recognising the racing cars, the cobbers, the eucalyptus balls, the killer pythons. How had I not noticed this before?

I remembered back twenty or so years ago when I would visit my local milk bar in the country town I grew up in, my koala wristband purse holding all my saved up coins, and spend hours making a careful selection of treats, all to be placed in a white paper bag, then shoved in my pocket before my brothers found out.

Any lollies in our house had to be carefully counted out by my mum in front of us, ensuring an even distribution across the siblings. We would all sit in real close, counting with my mum out loud and cracking it if someone’s collection had too many red frogs.

Summer childhood for me wasn’t just about confectionary (however as a child that was obviously an important part of saving money and doing chores), it was about adventure and running and not letting mum know the full extent as to what we got up to as kids. It was about games.

A recent road trip to my parent’s house in country Victoria reminded me of the endless chores my brothers and I would rush through just so we could go and play on the trampoline or the BMXs. In the heat of summer, we would use our backpacks as adventure kits: the vacuum hose for sucking up ghosts, the Tomahawk axe (mum didn’t know about this) for making quick hunting spears from willow, rope so we could lasso giant boulders that would come down huge tunnels if we stepped on the wrong stone when walking through our specially made Indiana Jones-style obstacle courses, and we always brought along enough energy in a Cottees 2L bottle to fill a flux capacitor… just in case.

Mum made me wash my car on arrival. You don’t argue with my mum, so I just did it. Music was playing through the Realistic timber veneer sound system inside the house. It was a cassette: a mixed tape of anthems from the past – Goanna’s Solid Rock, Tina Arena’s Chains, Poison’s Every Rose Has Its Thorn and Bon Jovi’s Always.

My 32 year old self transformed back in time twenty years to when I was 12. I was thirsty, I called out to mum for a drink and she appeared wearing denim cut offs and her Bay City Rollers t-shirt, hair almost to her waist, thongs on her feet, holding a plastic cup filled with milk and strawberry Quik. I could hear my brothers inside the house playing Test Match, squealing as my older brother hit the ball bearings into my younger brother’s sun burn. We were all waiting for the sun to cool down so we could take the tyre tubes down to the creek, our swimmers still hanging on the line from the morning’s dip.

This was summer 1994. The summer my older brother made us watch Jaws the day before we drove to Queensland for Christmas. My younger brother and I were so terrified of the ocean, we spent the whole time only ankle deep in water. The summer my Nan took us all to see Babe. The summer of Ace of Base. Of pastel. Of Poscas. Of 90210. Of bare feet. Of Grip Ball. Of Rick Moranis. Of awesomeness.

I jumped into the water and resurfaced, finding myself in my grown up car driving back to Yarraville, my son eating sultanas in the back seat. My mum had put a box of my old CDs in the car. I put the disc on top in the player. It was Warren G’s Regulate featuring Nate Dogg. Perfect car music for our trip home.

We arrived into Yarraville and drove down Anderson Street. The windows were down, blowing the sweet warm air filled with the smell of popcorn from The Sun into the car. This was my new home where new summers would be formed. A bunch of young kids had balanced their BMXs up against the IGA, and were hanging out the front wearing Aztec prints and scratching at mozzie bites. Perhaps I was still in 1994?

Yarraville is my inner suburban country town. The friendly hand signals people give from their cars as they wave you through the traffic, the chats in the street as you bump into your neighbour, the garage sales that you hang out at for hours because you have made a new buddy.

When my son went to sleep that night I turned on the TV. Spaceballs blasted from my big screen. My husband pulled the Neapolitan ice-cream from the freezer and we ate straight from the tub like kids, bypassing the vanilla.

Perhaps we are all just big kids in adult bodies? I hope there isn’t a switch that suddenly turns off, turning me into a fully grown adult. Until then, I’m going to enjoy the sweet smells of summer with all its lolly counter goodness, watching Jaws re-runs, popping monos on my bike and high fiving random strangers. If you see me reaching high in the air with my palm facing forwards on the streets of Yarraville this summer, hit me back with a one handed clap and let’s drink a milkshake and discuss Rick Moranis.

WOMEN’S FOOTY A WINNER IN THE WEST