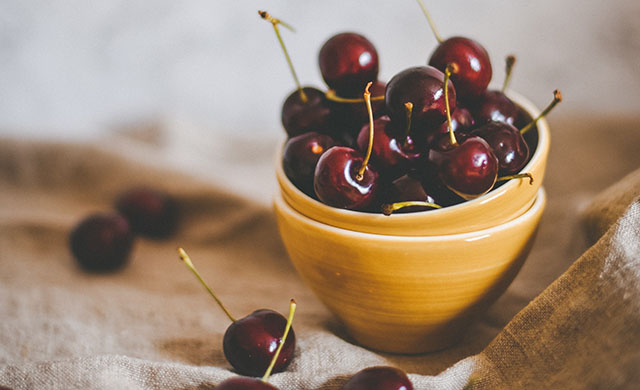 This was, in 1967, Nancy Sinatra’s recipe for summer wine. Cherries, the fruit that heralds summer and Christmas, give us a little flavour pop perfect for eating fresh or a variety of colourful and flavour filled recipes. These juicy, summery fruits have pleased the palates of food lovers for centuries.

Their ruby-red colour and tangy taste won cherries a place on the tables of Roman conquerors, Greek citizens, and Chinese noblemen.

History tells us that cherries Down Under have been cultivated in southern Australia since the late 19th Century, when they were introduced to the New South Wales town of Young. Now known as the cherry capital of Australia and host of the world-famous ‘National Cherry Festival’. But to this day, Turkey is the most prolific cherry growing nation, producing almost 25 percent more than its nearest rival, the United States. Iran, Italy and Russia round out the top five cherry suppliers of the world.

They indeed get their name from Turkey, as the English word derives from Old Northern French or Norman cherise from the Latin cerasum, referring to an ancient Greek region, Kerasous near Giresun, Turkey, from which cherries were first thought to be exported to Europe.

Victoria’s cherry season is quite short so there are few ways of how to make the most of summer’s bounty. A classic is Cherries Jubilee, created by the famous chef Auguste Escoffier in 1887, to celebrate Queen Victoria’s 50th year as monarch. The Queen’s love of cherries was well known, and Escoffier adapted the old French method of preserving fruit in sugar and brandy to make a truly celebratory dish. The original dish did not include ice cream, but vanilla ice cream soon became a staple feature of the dessert. Other uses are in trifles, zuppa inglese (the Italian version of trifle which translates as English Soup), tarts, cheesecakes, pies and so much more.

Another evergreen is cherry jam, which can be made at home with less sugar and then used for different recipes: By making jam, you can enjoy that sweet taste all year long, but I must say that there is nothing better then just indulging in them fresh, for that short and magical period of summer.