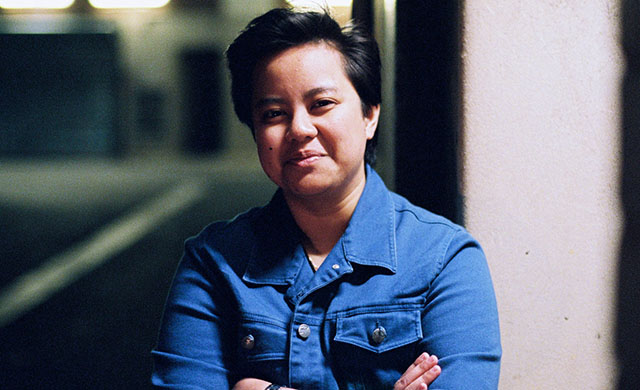 An ongoing series exploring unusual careers in the inner-west of Melbourne, by Belle Hann.

Dalene Silva Soberano is a poet

Darlene Silva Soberano can tell you the exact moment they became a poet: “I read this one poem when I was thirteen or fourteen that changed my whole life. I can still remember a line from the poem “You are a fever I am learning to live with, and everything is happening at the wrong end of a very long tunnel.’”

In that moment, Darlene says “I emotionally became a poet.” This epiphany led to a degree in creative writing from Deakin and RMIT. Nowadays, Darlene is one of Melbourne’s emerging poets with works published in Australian Poetry Journal and Mascara Literary Review. They currently serve as a poetry editor for Voiceworks Magazine, and received a Hot Desk Fellowship from The Wheeler Centre, Most recently, they have been featured as a Poet Laureate of Melbourne.

People do react unusually when they find out about Darlene’s career. “People become a little bit more vulnerable around you,” Darlene says.  “One time, I did some factory work and told a worker I was a poet. They responded by making up a poem on the spot.”

Darlene also notes that people can have some wrong ideas about poetry. “A Lot of people think poetry is very serious,” Darlene says. “We learn from the dead poets on an institutional level and it becomes this rigid thing.” However, Darlene feels that contemporary poetry offers a different experience that what we might have suffered in Year 10 English. “The living poets today are very playful, wonderful, petty – even gross – in their work.”

Nobody becomes a poet to make serious coin, and it is true that poetry doesn’t, well, pay. While Darlene has received financial compensation for publication, they also work in literary/editorial organisations. Yet this doesn’t mean that poetry isn’t a worthwhile pursuit.

“There’s so many ways to be a poet,” Darlene says. “Pay attention to the world around you. Your own obsessions and own desires are what will make you a great poet. And just write!”

How could I pack for the Philippines at a time like this?
This morning I woke from another bad dream
of a woman running from me in horror.
This morning I put on my shoes and gave Dipper his leash,
and outside, smoke was thick around the everyday trees
I’ve seen since 2006 when we first moved here.
On Messenger, I write to my friend in Canberra something like,
You’ll be fine if you’re young and fit and healthy—
She says, Today, it is the vulnerable, tomorrow it is all of us.
This morning I am worried for my lungs.
So far, they have survived the death of a grandfather
who drowned in his sleep.
Every year on Invasion Day my mother broadcasts
to all of her friends and family,
thanks the government on Facebook
for the life we couldn’t have elsewhere.
She says, Babe, the water can’t touch us here.
Here, the Werribee River could not flood us
even with its strong spine.
Here, we can finally run along the waterside.
I say, Ma, my first love drowned me a little bit.
In two days I am returning to the country I couldn’t live inside of.
I promised myself I would stop fleeing, forgive me
I had to go.
If I didn’t board the plane, it would still leave without me. Oh—
now I am on the plane,
guzzling petrol as we fly over New South Wales. Oh—
now I am trying very hard to process
all the names of the dead: