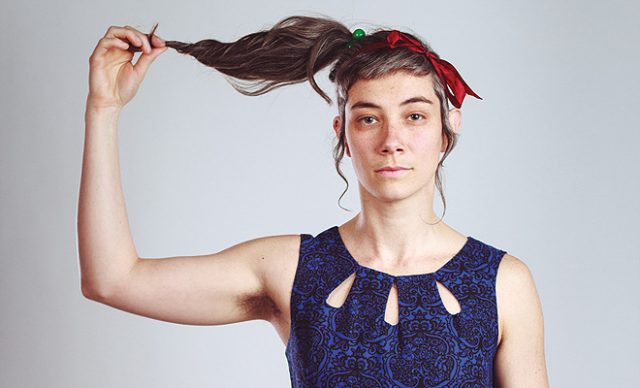 Circus Performer and Clown Katy Burrows was attending the Woodford Folk Festival when she watched a clown performance.

At the very end of the show, the clown got up and said “I used to be a drama teacher. And if there’s anyone in the audience that hates their job, go and quit your job and follow your dreams.”

The clown’s words sparked something with Katy, who was working as a visual arts teacher in Central Queensland. She had been thinking about becoming a circus performer, despite not being physically active at all. “I didn’t even own a pair of sneakers!”

She started an intensive regime to get herself up to speed with the bodily demands of circus arts: everything from juggling to lifting weights.

“I was really uncoordinated when I started,” she says. But she was determined to practice, practice, practice. She has also studied circus arts across the world, including attending Parisian clown school and a long stint in Chile.

And it paid off: Katy is now the Resident Artist at the Women’s Circus in Footscray, a beloved feminist arts organisation offering circus opportunities for all women.

Katy’s specialty is the static trapeze, in which impressive physical feats take place on fixed bars. She also sometimes performs as a clown, delighting audiences at the Melbourne Fringe Festival with her geriatric clown character “Doris” who threw big granny panties into the audience.

At Women’s Circus, Katy is responsible for teaching classes and workshops, developing a pedagogical framework, and work on various projects. She is excited to be performing and co-directing the upcoming circus show “The Drill” that performs untold stories of Footscray’s Drill Hall during the lead-up to World War One.

So how did family and friend’s react when she literally ran off with the circus? “My parents are still surprised,” she laughs. “I was afraid of everything as a child.” Her friends, however, have cheered her progress along, even in the early days. “They bought me a unicycle for my birthday,” she says. “They were really impressed that I stuck with it, that I didn’t get afraid, and I didn’t give up.”

Visit womenscircus.org.au for updates on “The Drill” show, coming up in late 2019.

“So What Do You Do?” is an ongoing series exploring unusual careers in the inner west.