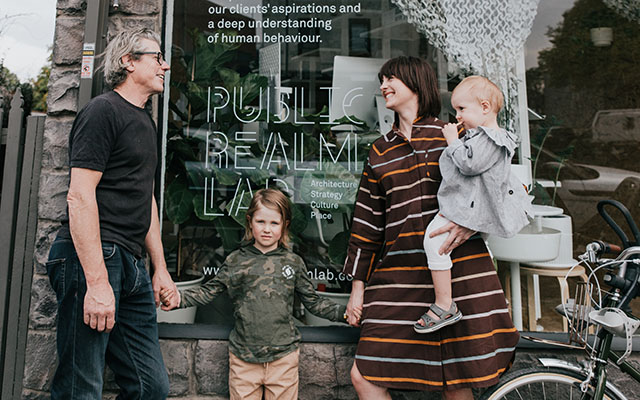 Mini Maddern is a 12-week activation of Maddern Square, Footscray through play. Mini Maddern will start with the Build Party that brings children, educators, design and construction professionals and the community together to transform this part of the city.

The activation will remain in place for 12 weeks as part of a Maribyrnong City Council placemaking residency, supported by Victoria University’s Early Childhood Department.

What inspired you to come up with the idea of Mini Maddern?

Public Realm Lab’s co-founder Anna Maskiell was in the US in 2019 on a study tour researching urban design and city making. As part of that trip she met up with some incredible academics and researchers investigating how to embed play and learning in cities, to take advantage of all the incidental time kids spend moving around their community. A few months later Maribyrnong City Council and Victoria University launched their placemaking residency program which aims to activate Maddern Square and increase visitation to Footscray. We saw an opportunity to change how people use Maddern Square through play!

Who is Public Realm Lab? Tell us about the people and why they’re passionate about learning through play!

Public Realm Lab are architects and urban designers based in Footscray. We are a small team focussed on how the built environment fosters social interaction and promotes sustainable living.

Everything kicks off with a Build Party. How’s that going to run?

The Build Party is the launch pad for Mini Maddern. Over the 27th and 28th of March we will be joining our team of VU Educators and Maribyrnong City Council event staff to transform Maddern Square into an urban playscape. The Build Party weekend consists of 4 x 2.5 hour sessions during which children will work in small groups facilitated by educators and designers to play, create and assemble play elements from loose parts. The Build Party has been selected for National Gallery Victoria’s Melbourne Design Week program.

Victoria University Early Childhood team are also getting involved. What will they be up to throughout the Mini Maddern residency?

The VU Early Childhood team have been the most wonderful partners! They have been working with us over the past 6 months to explore what kinds of playful activities could take place in Maddern square. VU Early Childhood students and staff will be doing their placements at Mini Maddern over the 12 week period, observing children at play and interacting with families if they choose. These sessions will encourage children and their families to engage with the space through making, craft and loose parts. A program will be published shortly outlining the dates and times of the sessions and how to get involved! We are also in the process of programming events to be conducted by other local businesses / organisations like kids craft and exercise sessions. We are on the hunt for anyone who wants to be part of this.

What are you expecting to be the end result of Mini Maddern?

We see this as a valuable opportunity to change public perception of Maddern Square and encourage children, their families and friends to use the space year round. The 12 week activation will bring people to the centre of Footscray, this will create a safe and unique play experience in the west and bring people together within our community to change how we use our public space. We’re hoping to create a community space that reminds people that the city belongs to us all as a collective.

It sounds like there’s going to be many opportunities for imaginations to run wild… Who’s really going to be running the show, the kids or the big kids?

The goal is for the big kids to set a loose framework that responds to the need for safety, surveillance and legibility (meaning people understand how they can use the space and get involved) and then let the little kids loose. All the adults involved in the Build Party and residency are there to support and learn from children, not the other way around.

The Mini Maddern Build Party is part of Melbourne Design Week 2021, more details at minimaddern.com.au. You can also follow the fun on our instagram – @minimaddern. We are always looking for more community members to get involved- if you are a local business/ tradesperson/ creative please get in touch to be part of this exciting 12 week project!