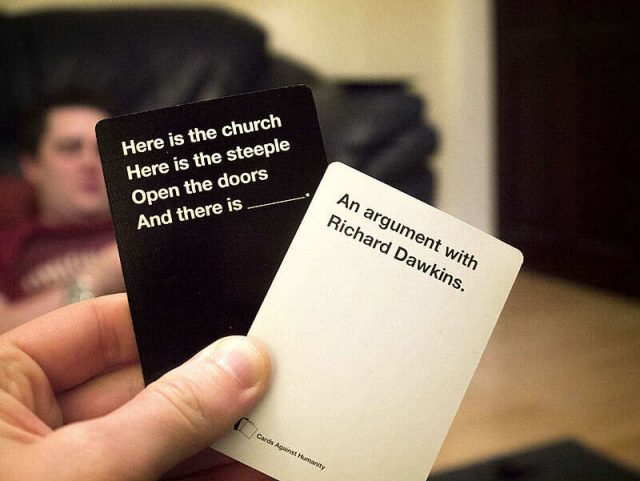 Odds are you are going to be offended at some point. That’s perfectly fine, in fact it is expected of you to be insulted. Cards Against Humanity doesn’t care about your sensibilities, it is a card game designed for horrible people. It says so right on the box. If you are easily offended or find yourself thinking that the game is crass then odds are you are not a horrible person and should pursue other forms of wholesome entertainment, like knitting or hiking.

Now that we have that out of the way lets get to the basics. It is a card game, yes this has been stated but it needs to be said again. Played with two sets of different cards, black question cards and white answer cards. The black cards give you a situation like “Why am I sticky?” and you then have to use the white cards to answer the question. Now lets be clear, the white cards do not have to make sense, they can be absurd or crude. You’re answer could be “The Chinese Gymnastics Team”, now lets not dwell on the logistics of why The Chinese Gymnastics Team has made you sticky. Everyone playing selects what they believe best answers the question such as they are, the final choice is left to the one person not playing the round, the Card Czar. Doesn’t that name fill you with a sense of power? Card Czar! The Card Czar is the tyrant for one round, if they decide that “A Stick” is a better answer than the Chinese Gymnastics Team then so be it. The Czar has spoken.

So everyone plays a white card to a black question card, one person who is the tyrant for that round weighs the merits of each white card and makes a final decision all while reading out the white cards to the amusement of all those playing. Everyone takes turns being the Czar, because the game wants you to share the tyranny. The game is best played with more people, a large enough group gives you a wide range of possible answers and more time for people to laugh or argue.

Created in the United States by a group of High School friends, the game started life out known as Hyper-theticals, played amongst friends on New Years. Then when exposed to the internet the game took on a life of it’s own. Available online, the game has regional sets, America, the UK and Australia. Both the Australian and the UK versions have 15% unique content, which is important because the American version of the game has cultural references that will leave you scratching your head in confusion and possibly disgust, especially those Dick Cheney ones. Also, don’t buy the game from a store, they mark the prices up. Instead buy direct from the website, you get it in two days and it is much cheaper, also there is the expansions and the Bigger Blacker Box to hold all those wonderfully horrid cards.

Now for the cons, it is a card game, it needs to be played in a group and it does aim to offend. This means that some people will be offended by the litany of crude, sexist, racist and just downright awful options you have to play with. It is not recommended that you play this game with anyone under 16, or else you will have an awkward time explaining certain aspects of the game to the children. Admittedly you’ll be doing this as well with adults, but you’ll be able to explain it in a less wholesome family friendly way.

Another issue is the number of people you need to enjoy the game. It is a party game, you will need more than four for it to really shine and having a fairly switched on group is also key. While alcohol lubricates the process, it can also be a hindrance as the game drags on. And boy can it drag on. You will get bored at some point so it is smart to call it quits or at least make sure you take breaks. Then there is the physical pain, laughter and lots of it at that, will hurt your lungs. You will feel the pain.

If you enjoy a card game for horrible people or are merely curious then Cards Against Humanity is for you. If not then you can wait for Exploding Kittens, I hear that is just as bad but only time will tell.