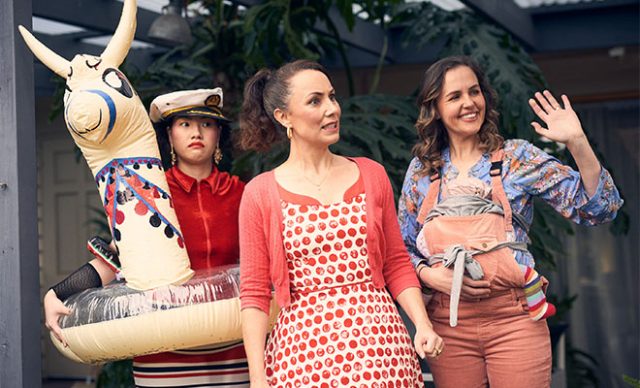 Written, directed and filmed in Melbourne’s inner west, Sonia & Cherry is an odd-couple comedy web series about best friends who think they know each other, until they become mums.

Cherry’s into attachment parenting; Sonia parents via apps; Cherry doesn’t give her kids sugar, Sonia doesn’t care as long as it shuts them the f**k up.

With principal funding from Screen Australia, Sonia & Cherry recently launched its second season with more relatable, brutally honest hilarity. in each snappy 7–8 minute episode, Cherry and Sonia continue to navigate their different approaches to parenting, in a comedic and empathetic look at their friendship after kids.

Created by two talented women of the west – written, directed by, and starring Yarraville resident Victoria Thaine (The Loved Ones, Caterpillar Wish), produced by Footscray native Naomi Mulholland (Clickbait, Wentworth), and also starring Seddon resident Petra Yared (Crownies, MDA); Season Two of Sonia & Cherry highlights the gap between fantasy and reality of parenthood. And the struggle to maintain the status quo as the ‘perfect’ mum; whatever that even means!

“We are thrilled to showcase the talents of our inner west community, with Glee Club Footscray helping to “sing a baby out” in Episode One, and a cavort of local children appearing in Episode Six.”

“We are incredibly grateful for the support of businesses such as Hopheads, who kindly allowed us to take over their space for our fantasy birth sequence and we thank Maribyrnong City Council for facilitating our shoot at Pipemaker’s Park,” said Ms Mulholland.

Sonia & Cherry tackles the unflattering aftermath of birth and rivalry for the best parenting approach. It dives headlong into the harsh realities of the post-baby body and the impact of parenting on mental health. It edges toward something a little darker when Sonia declares Cherry has gone ‘post natal’, and when Sonia is clearly drunk in the middle of the day.

“Sonia & Cherry challenges the idea of the perfect mother through the actions of best friends with completely different parenting styles, in a world where parents are overwhelmed by advice from all corners of the internet and assaulted by images of the ‘ideal’ Mum.”

“We wanted Sonia & Cherry to expose a more real, messy and flawed ideal, where it’s okay to get it wrong sometimes. And when you do get it wrong, who better to have by your side than your bestie,” said Ms Thaine.

Sonia & Cherry is perfect for laugh out loud post lockdown entertainment we can all do with right now!

Check our Season 1 & 2 of Sonia & Cherry is at: www.youtube.com/soniaandcherrytv