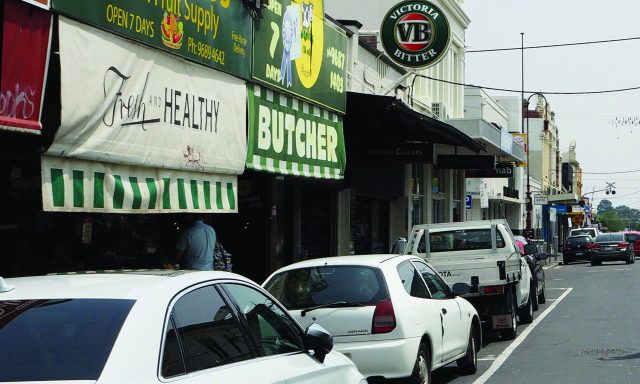 You may recall last November we had some fisticuffs in Footscray, just like in the good old days, or so some might think. I felt disgusted after reading this, I had a notion that this sort of behavior belongs in a different time and place, not here in Footscray, much  less Melbourne.

Later when the dust settled Council placed a moratorium on paid parking in both Yarraville and Footscray until February 29th 2016, undoubtly in response to the events at the November meeting, and in the interest of fairness to both activity areas. The suspension of paid parking is understood to create a $600,000 deficit in the Council’s operating budget, as a result of which reduced spending on services and/or cuts in new projects appear likely.

Regardless of what anyone might think about the Council’s process on implementing paid parking on a popular shopping strip, or whether it is even warranted, clearly we as Melbournians need to talk maturely about the elephant in the room – we all hate how cars degrade our environment, and how dependent on them we are; until, of course, we get in one.

After the melee at Council, a spokesperson for the “No Paid Parking” (NPP) group appeared on ABC News 24 suggesting Yarraville has experienced an economic downturn compared to other activity centres since the introduction of paid parking [2]. Yet Yarraville, in theory, has sufficient housing density and residents within walking distance to support the types of businesses that operate here. Implementing paid parking should have little impact on business.

SJB Urban’s research piece ‘Shall We Dense’ [3], questions the state government’s Melbourne 2030 housing policy and provides recommendations on dwelling density to support new activity centres. The premise is that the greater housing density, the greater the economic growth for businesses, and the better the potential for social cohesion. They recommend that high-density housing within about 500 metres of a retail centre is enough to support thriving businesses, without relying on customers travelling by car.

NPP made the claim that since paid parking was implemented in September 2014, traders in Yarraville are defaulting on their mortgages, and small businesses have been going under [2]. Where is the evidence to support this claim?NPP also talked about business booming in the nearby Yarraville Square, which has free parking. But Yarraville Square has always been busy because, up until recently, it had the only large-scale supermarket with lots of carparks in the Footscray/Yarraville/Seddon pocket, in relative isolation from others. In these suburbs, there are only convenience shops, independent grocers or up-market delis, with the closest Coles in Williamstown and Footscray, and Sims Supermarket in West Footscray.

Consider, also, the Blockbuster Video franchise at Yarraville Square, which closed down recently, despite free parking. Yes, it was an outdated business model, but was nonetheless someone’s livelihood. I’d hardly describe this area as ‘booming’; it’s business as usual. NPP proponents have argued that, for example, stay-at-home parents who live near Yarraville Village rely on their cars to buy groceries; it is more likely that they are driving to the nearest large-scale supermarket for the weekly shop, but walking to the village for everyday bits and pieces.

It is worth comparing Yarraville to Footscray, which does have parking meters. For all their differing character and scale, these two suburbs could be cities apart, not a few kilometres, but they’re both well connected to public transport, and share a similar density, on paper, of about 25 residents per hectare [4 & 5]. Nonetheless, paid parking in Footscray hasn’t stymied the opening of new businesses (including the unfailingly successful 8 Bit Burgers). Paid parking has hardly been the death of retail trade in Footscray.

In the ABC interview, the NPP spokesperson warns that Seddon is Council’s next target for paid parking because it is a booming retail strip that suffers from traffic congestion [2]. But, according to SJB’s hypothesis, Seddon also has adequate housing density to support large businesses.

With a population density of 51 residents per hectare [5], Seddon is the most dense suburb in the city of Maribyrnong (on paper, at least). If you were to make a crude extrapolation of SJB’s theory of dwellings per hectare and apply it to the Seddon Village, bigger types of businesses can thrive on patronage from local residents alone – who walk or ride their bikes – not from east-of-the-river visitors who drive on the weekend. Business should be booming.

Having been a resident of the area for the last 4 years, I’ve seen Seddon become a hospitality hotspot. My own misgivings aside – about the loss of local traders, including a lead lighter and even the Croation video rental shop, which contributed to Seddon’s village-y feel – change in the area will probably continue as the professional class becomes the dominant demographic here. It makes sense that other similar businesses would set up shop and feed off the competition.

The central activity centres of Yarraville and Seddon have at least a density of 28 houses per hectare (SJB talks about dwellings per hectare, and the Maribyrnong Planning Scheme’s Municipal Profile estimates 28 dwellings per hectare for Footscray, Yarraville and Seddon [6]. If you add a dose of salt to the research findings by SJB Urban, there is enough housing density to at least support a ‘small centre and a primary school’ – by local residents alone.

I think it is inevitable that city councils will want to find new ways to raise money to keep streets clean, keep libraries filled with new books and run social services – basically create the framework for all of us to be able to continue to enjoy all the things that go with liberal democratic societies.

I also hope that we can have another council meeting without the need for security guards to prevent disgruntled attendees carrying out vigilante justice on Councilors who make decisions they don’t agree with.

The lesson here is that well-run businesses, that effectively target their market, serve their customers’ needs and respond to the zeitgeist of the area will thrive. I don’t think the reason for a business to go under in Yarraville, as the No Paid Parking group suggests, can be solely laid at the feet of paid car parking.

Now that we have a moratorium on paid parking, the onus lies with the No Paid Parking group to clearly demonstrate, with real evidence, not hearsay, why we are all better off with free parking.

Redmond Hamlett is a local architect.