Darve Smith, James Young and the guys of Cherry Bar and Yah Yah’s fame have been embarking upon a big reno at the much loved former Reverence Hotel site. It’s called The Hotel Westwood and westsiders in the know have been waiting 18 months for it to open.

Works started in 2019, due to Covid restrictions and hundreds of thousands worth of hidden renovations. There has been delays but the exciting news for lovers of old school pubs, live music, a good feed and beers is that the beer garden and main band room opened on Sunday 29th November.

We caught up with James Young and Darve Smith to see how it’s all coming along. “We’ve had so much support already from the local community who are keen to see the venue reopen as a pub and live music venue,” said Darve. Thankfully the pub has been saved from being knocked down and turned into another set of apartments. “The Maribyrnong Council have been really helpful with approvals and people like Katie Hall MP have been supportive through the challenging process of getting the pub opened.”

“One of the major reasons we committed to the site is we want to be part of contributing to the great sense of community in Footscray and the west. We feel we are just custodians of the pub,” he explained.

The bar, restaurant and band rooms are slated to open January 21. “We wanted to try to keep the look of an original old school pub. Like an old house it turns out to be an expensive exercise but we are really excited how it’s turning out.”

The Westsider was treated to an exclusive tour of Hotel Westwood and can report that there is an impressive 70s style bar installed, lovely velvet round booths, state of the art sound system and expensive behind the scenes work to get an 1800’s heritage building up to scratch. “It’s been a long process but we are excited for everyone in the west and beyond to see the end result.”

James Young has been running the band room at The Yarraville Club for eight yours and firmly believes the west is the future when it comes to live music. Head Office has also moved to Footscray, upstairs at Hotel Westwood, including Entertainment Manager, Taylor Poole and Production Manager, Daniel ‘Caz’ Caswell (pictured).  “Expect big touring acts and high profile local acts on three stages seven days at week at Hotel Westwood, think bands that play at The Corner Hotel coming to the west,” says James. 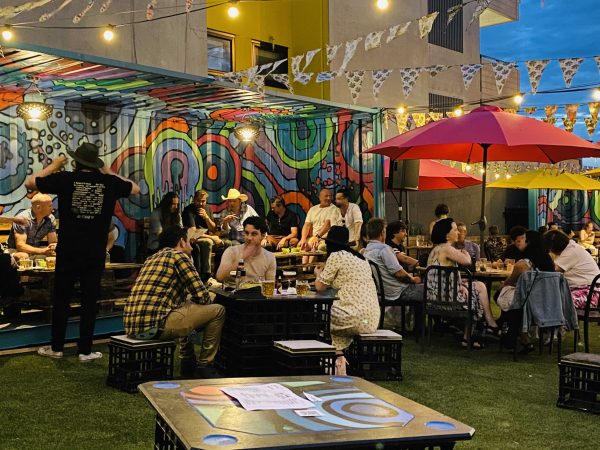 Melbourne street artists including ChuckM, Makatron and Cruel Space have created epic murals on the walls in the new beer garden. “We had four local street artists turned up to see what was going on and they ended up helping to get the walls finished,” he said. “It’s a very different feeling dealing with the local Footscray community compared to other parts of Melbourne, there is a willingness to say yes and great support for us to open.” “The local attitude is a welcome with open arms and what can we do to help. A community vibe. We even had our neighbours Dragon Force come in and say when are you opening we’re missing the music. It’s the first time we’ve had a complaint about the lack of noise.”

Even though the lockdown has delayed the opening of Hotel Westwood for 8 long months, “the silver lining is getting approval to add to Hotel Westwood and transform the car-park into a fantastic outdoor space.” This has the added benefit of supporting street artists, local trades and sustainable companies like Growspace.

Come down to Hotel Westwood for a beer, cocktails and tacos in the new outdoor ‘garden stage’ (100 patrons max) or hang out in the main band room (30 patrons max). Don’t worry if it rains there are cool purpose ready, sit in containers outside ready to go.