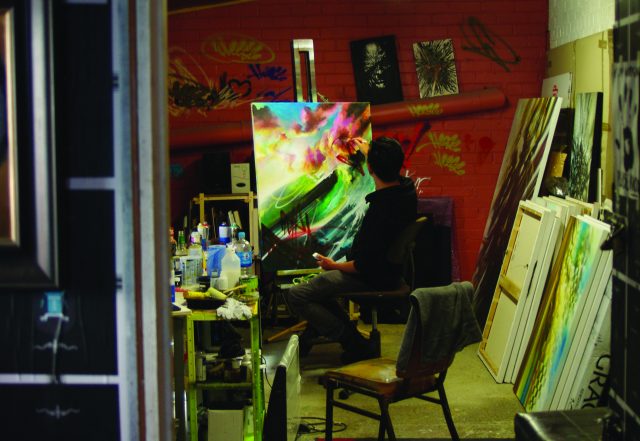 I was that kid who’d always just paint and draw.

When I was 11, Communism collapsed in Mongolia, there was government change and the whole economy collapsed, everyone was poor. It was tough but the other side of it was getting things like western media. They started showing western programs, there was MTV and all this pop culture started trickling in, things like rap music and metal. It was a really good time being young and discovering all that stuff.

I went to Poland when I was 13 and that’s when I got a taste of all these other cultures and got into comics. After Poland, I came back to Mongolia. In a way it was a good time. I finished high school and had the option to go into art school at the local university but at that time it was safe to say that there was no future for artists.

So instead of going to art school I got into this school of foreign relations. A lot of my generation were in the same boat, we all wanted to go away and learn something somewhere else. One thing I realised early on was that English is a global language so I chose Australia.

In 1999, I got to Sydney and there were few Mongolians, it was such a crazy place for me, I’d never seen that many skyscrapers and palm trees. I enrolled in an English course initially and then into an Advanced Diploma of International Business. That was the thing coming from Mongolia, your parents wanted you to get some knowledge that’s actually going to get you a job but I hated that course.

I got a place in Newtown, right on King St above a 7-11 in a show box room for a year. At this stage I was waiting tables, studying and then drawing all night. I’d put on my headphones and just draw. I put some prints up at a friend’s Goth/Metal night and some dude came up to me during the opening and offered me a $1000. He gave me $300 as a deposit and I was buying drinks all night. It’s what really made me push going to art school. I was about to finish the business course and I still couldn’t afford to pay the university fees but somehow I wrangled some money and enrolled at Sydney College of the Arts. 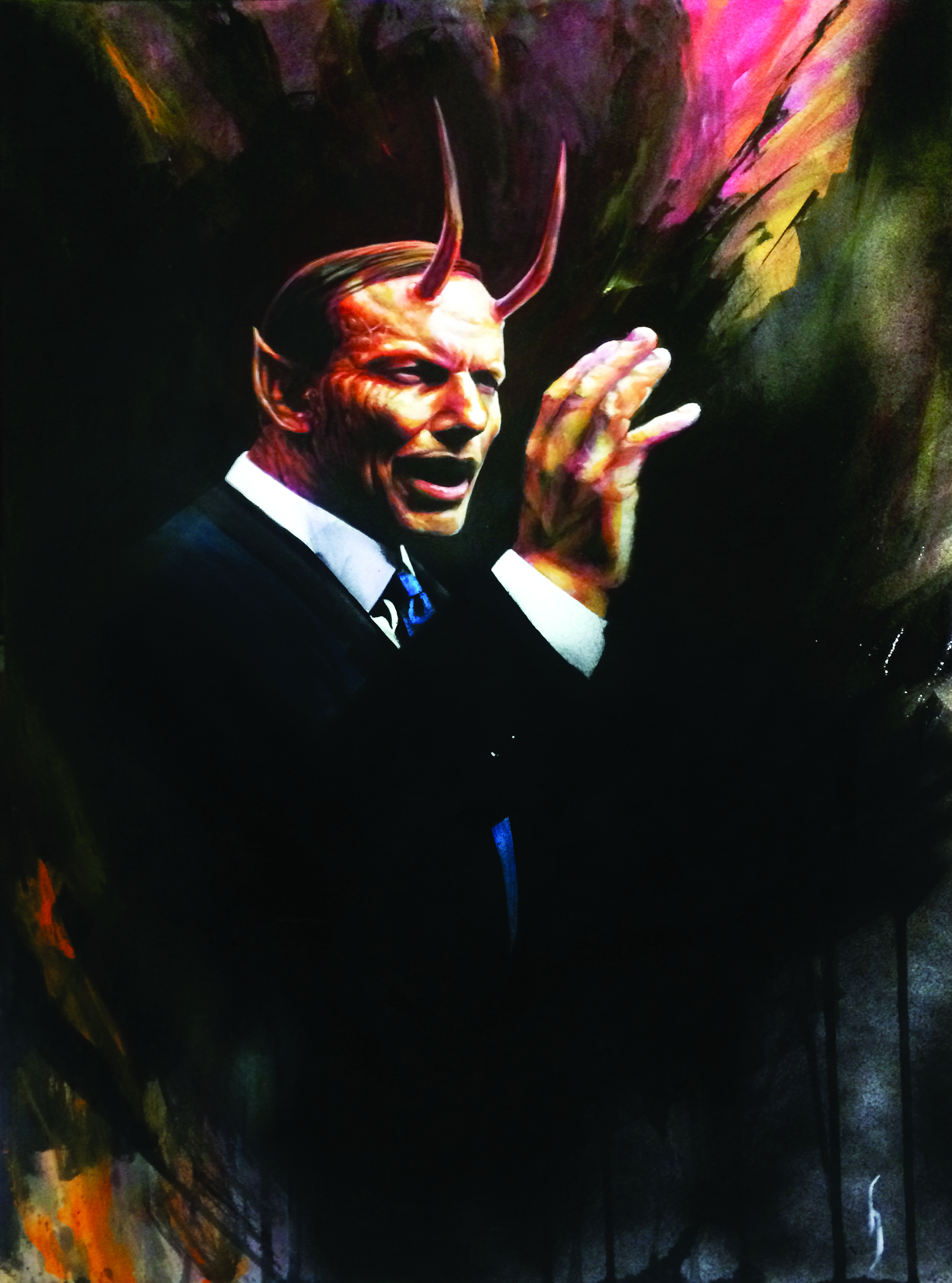 Art school was a big learning curve but it was exactly what I wanted. There are no rules with contemporary art anything you do, if you say its art, its art. You didn’t have to know everything to actually be an artist and that fitted me fine. I’d only paid that original semester so they wouldn’t release my grades. They just let me keep attending the classes. Eventually I got a job during the last year of university with this signage company and could support myself a bit.

Art school was important as it taught me to think, that critical thinking, analysing and understanding an idea. It’s still in my head; everything I do now has to be filtered through that. I still go and do things just for fun but if I really want to do something I want to think about the concept and develop an idea, make a valid effort to express an certain opinion or idea, otherwise I might as well just be a commercial illustrator, which I do a lot anyway, but I clearly see the difference.

My wife Eggie and I moved to Melbourne in 2010. I was working fulltime at a place that was pretty much a carbon copy of where I worked in Sydney. I worked there for a while and they agreed to sponsor me.

I didn’t really start painting walls until 2010. I was from this punk/metal scene and the graph scene, it’s an inner circle thing, and you really need to know people. It’s a territorial thing, you can’t claim territory when you’re not from here, in Sydney it was like that but I came here and people were like, ‘You’ve never painted with spray cans before…what are you doing, come on let’s go!’.

With walls, I love graffiti culture, the codes, I respect that a lot. In that sense, whatever I do, no matter how arty it is, I’ll still only use spray cans. I want to show respect to the medium. If I paint in the studio that’s where I can actually be creative and explore stuff. Out on the street, it’s not a gallery, I respect that sort of static look of a spray painted wall. It’s all about painting, it’s about art but at the same time it’s about graffiti history and culture and respecting whoever came first.

To me graffiti was always political, a platform where you can actually express whatever the it is you want to express and get away with it, that anonymous writing on the wall. I didn’t get into it because of these giant murals going up now. They don’t actually excite me as much. It’s impressive that it’s big, but other than that I want to see something with a message, a certain concept. Early street art did have that but it got lost somewhere. I wanted to see more of that and no one was doing it and I said I’ll do it; I’ll get up and say something. When I see something wrong, I always feel like I should say something. Now I have a kid; you stop thinking about yourself and start thinking about your kid. 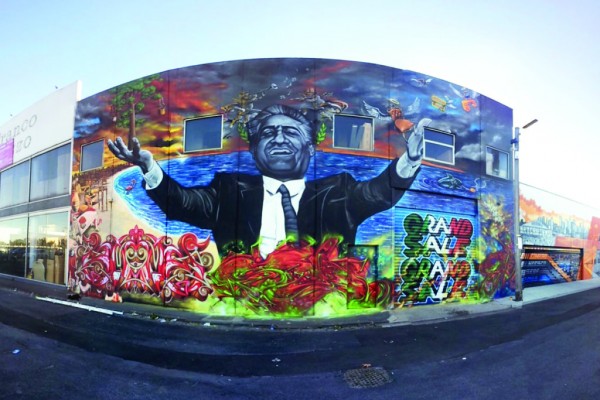 I had to change my style and attitude towards doing commercial stuff. I never wanted to compromise my art for anyone.  Just before I had a kid there was a shift, I was struggling with that concept in my head. I wasn’t progressing because I thought I wasn’t being honest with myself by doing things for money. I decided that I wanted to call myself a professional artist and that I should be able to do everything. I really took that on board. People would ask me to paint certain things and I’d usually say that it wasn’t my thing but then I started saying yes. It dawned on me that I’m learning, experimenting and getting paid and that just switched something in my head. There are compromises, but at the end of the day, I’m paying my bills by being creative every day.

Last year I moved to Yarraville and I was working with the kids in Footscray painting walls. Part of that was educating the council (Maribrynong) in what works. It goes back to that same argument about graffiti and art on the street, that’s something the council didn’t understand. They ran the Streetworks program, where we did so many walls together with other local artists. Then we did the Yarraville Village Store and carpark wall. The thing with that wall was that we were giving acknowledgements to the graph scene, to the history, to guys who are active now. But we also had to tick all these boxes for the council. I’m pretty versatile with my style of painting and other guys educated me a lot about the history of the west. And that’s why these collaborations worked really well because everything was ticked off. With the Yarraville wall we had all these guys who had been there and who had done this stuff for years, you know, mad respect. We also gave little shout outs to some of the younger generation of guys as well.

I was doing lots of research and that’s what makes it work, it’s not because somethings painted amazingly, it’s because of the culture, the knowledge that’s put on display and council didn’t understand that. Even the little ‘No paid parking’ sign, that was part of that. I live in Yarraville, I park my car there and it would be really hypocritical for me to ignore that voice and to do something different, so that’s what I did. It was a 30 metre wall and the (offending) piece that I did was like A3 size. I did it because of that, just give them a bit of acknowledgement, it’s their wall too, it’s a community thing.

My next show is going to be a fairly straight forward exhibition of my studio work. I’m trying to find the balance between abstraction and figurative painting. It’s also about high art and low brow, the energy of graffiti tagging mixed with realism and abstract expressionism all kind of rendered to a fine art painting. Experimentation, above everything, that’s what it’s about. I’m known for a lot of portrait work and I want to move on with that. One part of me enjoys that but apart from technique, there’s not really much room to play with it. When you’re working with abstract forms it’s a challenge, the painting grows naturally, it’s this organic process. I want the viewers to walk away deciding what it is, that’s what I think art should be. I’m a perfectionist when it comes to studio work but at the same time, I want to have more of that roughness and energy than the last show. I want my work to be accessible to the people. That’s what my street work is all about and that’s why I love painting on the street. I want to bring some of that into the galleries.

All the work I do, the walls, the commercial work, it all helps me to develop my skills, my technique, that’s all it is. I’m not doing it for anyone else, I’m doing it for myself. I want to be more than someone who just paints walls, I’m an artist, I’m meant to explore things, it’s a journey and I’m smack in the middle of it right now. I’m an artist what else am I going to do?

Heesco Khosnaran is a Yarraville based Artist whose aerosol works feature on many walls around the Inner West. His next solo show opens at Dark Horse Experiment, 110 Franklin St, Melbourne on the 20th November 2015.