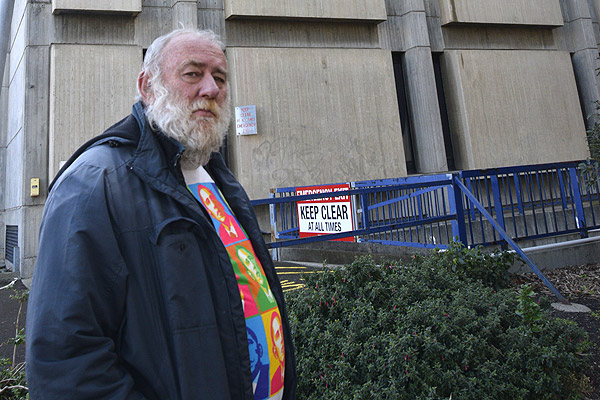 Ian Garlick has been a Mental Health Nurse for 35 years. For 15 of those years he worked at the old Footscray Psychiatric Hospital. The empty and asbestos riddled concrete brutalist monolith now greets visitors to Footscray Hospital, its grounds long ago converted to car parking. The building has always fascinated me and until recently I never knew its past history and use. Together with Ian, I recently took a closer look and he told me some of his and its story.

I grew up in South Kingsville

“It was incredible. You never travelled outside of your suburb as a kid. You’d be isolated in your own little area, your own little tribe. You’d play for your own little local football team. It was very homogenised. There was some diversity but it was very much Australiana, especially places like Yarraville. I’ve seen the transformation which I think has been great.

I trained at Whitten Oval with the Doggies, tried to get on their list but they wouldn’t have me. I played at Williamstown and got invited to play for the Swans (South Melbourne) but failed to impress.

“My mum and dad were great Bulldogs supporters. They went to the 1954 grand final and my father used to say that I went to it with him and came home with my mother because I was born 9 months after that.”

I was possibly the worst employee of everything I tried

“I was the worst bank teller, the worst storeman, the worst labourer and a failed VFL prospect. But five minutes on an in-patient unit, it struck me that I found something I could do ok. So that became a passion and my life changed. I didn’t see it coming but opportunity knocked and I took it.

My sliding door moment occurred when I was invited to attend interviews for psychiatric nursing at the local dole office. I attended one Friday for the interview, confronted by a three-person panel. One asked what I knew of psychiatry I honestly replied ‘nothing’. Another remarked on my height ‘you’re tall’. ‘Yes, 6’2’,’ I replied. The third panel member considered this and followed with, ‘you start Monday’. On my first day I was taken to be dressed in the standard uniform and the placed in an acute mental health ward and the patients immediately began addressing me as nurse.”

Back then it was much more custodial, punitive and much more institutionalised

“There was a lot of violence and corruption. When I first started training we were just on the cusp of change. Society was changing and the human aspect of mental illness was starting to be taken into account. The hospital that I trained at was called Wolston Park in Ipswich and had over 1000 beds. It was a massive institution surrounded by the Brisbane River. It was a place of dark evil.

“Victoria was further advanced in terms of care for the mentally ill at that time than Queensland. It was much more professional, there was more accountability. The times were changing and deinstitutionalisation was happening. Places like Sunbury and Larundel were closing. There was more support out into the community and more outreach.”

“I don’t know if it’s an urban myth but we were always fed the story that the building was placed back to front. It was designed by a Scandinavian guy who included features in the design to avoid snow forming on certain parts of the building. It was grey, it was dark and as far as a therapeutic environment, it was just shocking for patients. They were kept inside; we had no outside area, so it wasn’t conducive to good health. Despite the appearance of the building I was very fortunate to work with some highly talented and caring professionals.

“In my 15 years there I witnessed the extremes of the human condition. I will never forget the young man who blinded himself, so distressed was he by his vivid delusions. I was also first on the scene when a patient who believed he was Superman smashed out of a window four stories high and landed onto a concrete surface. He survived. Unfortunately, some did not survive their treatment and each of these deaths had a profound effect on all involved. We supported our own, we cried, consoled, and caroused with each other in an attempt to deal with the pain. Not surprisingly my social group was my support group, and was my work group.

“There were heroics and inspirations there as well. To see first-hand the struggles of people with mental illness that had destroyed their relationships, health and happiness but they trusted us and in return we were inspired by them. Deinstitutionalisation and communitybased care bought about the advent of Crisis Assessment Treatment Teams. Multidisciplinary and powerful, nobody could access a psychiatric bed in Victoria without CATT.

“Community-based assessments required CATT clinicians to attend sieges, suicides, and home-based assessments. In one case another clinician and I found ourselves cornered in a family home with a psychotic young man who cocked a baseball bat above our heads and demanded to know why we were trying to kill him. In these instances a slow measured walk to the exit felt like a walk to the gallows. The West Gate Bridge also provided its challenges, including being asked to speak with a suicidal young man atop the bridge with the threat that he possibly had an explosive. Thankfully he submitted to police as I approached the top. Survivors of the jump from the top of the bridge are rare but do exist.”

“The years I spent working on an in-patient unit was a fascinating learning experience. It involved working with the more acute cases, people who were a risk to themselves or to other people. I worked with some great psychiatrists, challenging patients, challenging behaviours. It was hard yards but it was never dull.

“The pressure was always on to get people well as quickly as possible because we always understood that they’d do better at home.

“There was also bed shortages, so there was a focus on getting a person to a point where they didn’t need to rely on hospital so much. The focus was on helping people learn how to deal with their symptoms. I was always a big fan of getting people motivated and selfempowered to check their own medications, look up the side effects themselves, and become engaged with their psychiatrist. There’s a lot of information out there that you can access about mental health.”

There was one woman who stands out in my memory

“She’d had multiple admissions for selfharming, her life was chaotic, and there were always concerns about her safety and of those around her. She consumed a lot of resources and was in and out of hospital. I would have spoken to her and counselled her more than a hundred occasions. But on one occasion somebody made the decision to withdraw a lot of support for her because it appeared like maybe the clinicians had the need rather than she did. All resources were pulled back; she was left with one person in the community.

I saw that woman 12 months later and her life had turned around – she’d taken responsibility for her own life. She came and chatted to me and it was fantastic to see.

“I’m a bit of an old hippy and I’ve got a fundamental belief. You have to be careful when you’re talking about different sorts of mental illness because some won’t respond to positive psychological counselling, some respond best only to medication especially when they’re acute. But when you’re talking about behavioural or personality disorders, I guess what we used to call the unhappy but well, I think self-esteem is the key. I mean if you don’t have a positive view of yourself then you’re robbing everyone else around you. I think it all starts from there, that’s a fundamental. You’ve got to really like yourself and you’ve got to place yourself first in your own life, above your partner, above your children so that they can get the best out of you. If you’re hurting yourself or disrespecting yourself then I think that’s the opposite of what you need to do and that comes with consequences. It’s all a part of growing up, respecting who you are.”

“There’s so much we still don’t know about disorders like schizophrenia and bi-polar disorder, but I’m optimistic. I think I’ve seen a lot of disorders that don’t exist today, simply because of medication. These illnesses were hideous things on people’s lives but with the advent of medication they’ve virtually eradicated some of those mental health disorders. As much as I’m not a fan of drug companies per se, they’ve got a lot to answer for, I think there will be advancements in treatment for schizophrenia and all the psychotic disorders. I think we’ll get to know more about how the brain functions and psychopathy.”

“Now they’ve incorporated the psych training into the general nursing program. Now you have to show proficiency, and/or a want to do a grad year. So it becomes very academic. I trained in-situ for three years. It’s critical to be honest; people will sniff out a fake. If you can’t give something of yourself, then I don’t think you’re going to be touching a lot of people. You need to connect. If you’re cold or distant then it’s not the job for you.”

“When families say to me ‘What can we do?’, I always remind them that you need to make sure you look after yourself so that you can be in as strong a position as possible to cope. It goes back to self-esteem and there’s an opportunity if you muster some positives here and do the right thing instead of looking at it negatively. Try and access as much information as you can about what you’re dealing with. You can do a lot of demystifying with information. That’s the first port of call, get as much information and be as knowledgeable about what’s going on as you possibly can.”

“That was a different gig working for a private company rather than the government as they had different expectations. It was eye opening, disturbing and distressing. There was way too much commercial interest and they’re always looking to their exposure to certain incidents rather than worrying about patient care. I also spent six months in Darwin which was wow…shut off the tape… unbelievable.”

“I’m looking to maybe sit on a couple of boards so I’ll see how that goes. I’ve got a couple of younger friends who I try and mentor who are in the industry and do fantastic work. I also follow the Western Bulldogs and I think they need to stick fat – stick with Bevo and stay calm.”