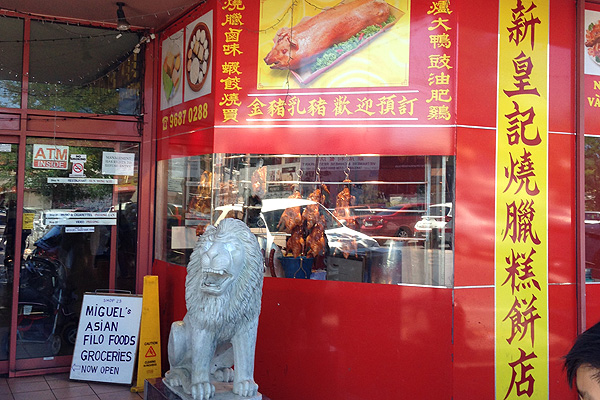 On the surface it would seem that Footscray is no different to other inner-Melbourne suburbs, however few suburbs can boast such a mix of ethnicity and culture. Life doesn’t just exist in Footscray, it thrives. Walk down any street and you will see a true slice of Melbourne life. In this suburb, multiculturalism slaps you in the face.

Although it may not seem so on first impressions, dilapidated shop fronts and two-dollar shops are not its sole attraction. Footscray’s uniqueness doesn’t pertain to its once grand facades or new millennium constructions; it is the diversity of its people, both new and old to this land, which makes it special. Each immigrant brought some part of home and country with themselves when they came here. Whether it is food, clothing, music, words, beliefs — all these elements have combined to form a vibrant, colourful tapestry.

Ever since the post-war Italian and Greek immigrants settled in Footscray it has become the centre of the West’s cultural spot. The Europeans brought new flavours and smells to the white-bread taste buds of ordinary Australians. Vietnamese people were the next wave of immigrants to wash over the suburb in the 70s, bringing their food and culture with them. In past years, Footscray has welcomed many more immigrants from countries such as, Sudan, Ethiopia, Iraq, Afghanistan, India, Sri-Lanka, China, Thailand, and Egypt; once again changing the suburb’s identity.

Nicholson Street Mall is a bustle of colour and movement. Shop facades are evidence to the Mall’s re-invention through the years. Italian, Chinese and African words overlap and intertwine; shops beckon, their goods and aromas entice the visitor to come inside.

My parents migrated from Italy and as a child I experienced the Italian-influenced Footscray. I enjoyed weekly shopping trips with my mum to Forges to hunt for a bargain; then we’d walk through to Coles, where we would buy steamed dim sims, so hot they would burn the top of my mouth. We would usually pop in to visit my Mum’s friend, Bruna, at the fabric shop, and the two of them would swap news and gossip. Our family went to dances at the Fiesta ballroom and on special occasions, we would see movies at the Grand cinema.

The Footscray of my childhood is different to the Footscray of today. Life is in constant movement and change; just as Forges is no longer a Footscray icon, I am no longer a child. I have created new rituals that I enjoy in this ever-changing suburb. Today my Footscray is about side-stepping the ever-present construction zones on my way to the library; relishing the taste of hot, steamy dumplings from Barkly street and listening to a myriad of accents as I walk down Paisley street.

Footscray has it all — old people, young people, immigrant people, poor people, wealthy people, black, brown, yellow and white. A mix of fashions that may never grace the cover of magazines, trackies, hoodies, saris, burqas, footy scarves and baseball caps. It is two-dollar shop heaven. It is Savers and Coles and KFL and Little Saigon Market. It is noisy, dirty and smelly. It is old and familiar; as cranky as the old man that sits on the bench in front of Liquor Land and as annoying as the guys that hang out in Nicholson Street Mall. Footscray is a suburb for the senses. It’s alive and ever-evolving.