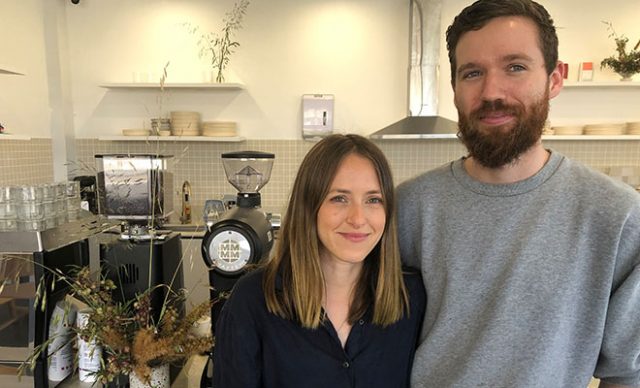 Nabo, which means ‘neighbourhood’ in Danish, is a brand new Kingsville café with sustainability, community, and excellent local produce at its heart.

It occupies the ground floor of a recent apartment build on the corner of Williamstown and Geelong Roads, and sits in a poster-worthy pocket of pure urban industrial West; across the street from the neo-Grec facade of the iconic Rising Sun building, bordered by eight lanes of Geelong Rd – waving distance from Bunnings – and abutted by the overpass.

Perfect, then, for realising the dream of inner-west couple Sarah de Lean and Cameron Bobbitt, who grew up in the hood. Cam’s a legend in the hospo community for his serious chops as a barista, having worked at Lady Moustache, Advieh, and There, so he brings the café knowhow.

The vision for Nabo, however, is Sarah’s, who was captivated by the Danish concept of ‘hygge’, coziness and comfortability with friends, after travelling through Scandinavia. “I didn’t get the cafe thing until being in Scandinavia in the middle of winter. They’re so warm and comforting, a place for people to gather,” she says. “I also became obsessed with Swedish cardamom buns.” Nabo’s cardamom buns are from Söt by Mörk.

“We felt responsibility, starting a new business, to look at our impact. Sustainability is built in.” So is conviviality. Nabo: an urban oasis where friends can gather.