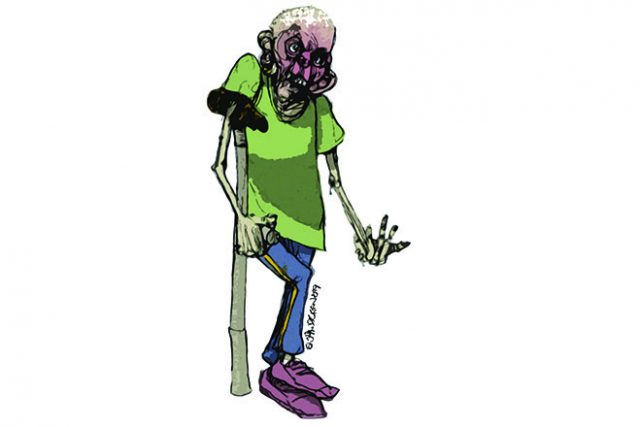 As the Church of the Mighty [War Against Satan HQ!!] empties of its supplicants, our protagonists are circling Masters’ stash of hard currency, just topped up from a lucrative round of back-to-back god-flog sessions over the Easter holiday. Cunningly stored in almost invisible lockers in a bunker that forms part of Brother Jimmy Masters’ private retreat, our players, with the possible exception of a dazed Roger Alan McKeever and a distracted Pria Kristen, have plans for the dispersal of this largesse. And large it is! Rumour has it around $2.75million, but who’s counting?

Standing in the airlock that separates church and state [ie Masters’ retreat], puzzling over the lockers’ locks, Fatso is also standing in the way of Ms Three-People’s plan.

In the body of the church, Pria is puzzling over a dazed McKeever who now towers above him, his height enhanced by a high-vis orange conical hat. It is dawning on him that this giant of a man bears an uncanny resemblance to the beast who got him banished here in the first place.

In an office in a nondescript building in the city’s centre, slightly into the future, master of incompetence and head of the Easter Plates Taskforce, Detective Sergeant Bryan Paterson is ostentatiously sighing at the diminishing quality of the CCTV feed that covers the final bursts of activity in and around the Church of the Mighty [War Against Satan HQ!!] on The Day in Question. That the electro-magnetic dispersal probe he holds in his oddly diminutive Trumpian right hand [‘the hands of a child’ as his mother deliriously told him ad nauseam] is entirely responsible for this pixel rearrangement, is as deliberate as the sun daily gaining the horizon. Paterson is driving the evidentiary train towards the manila folder stamped in red: ‘Insufficient grounds, case closed.’ He looks around at his colleagues. Nobody cares.

‘What the #$%@! [epithet disguised to protect younger, vulnerable readers] are you doing here?’ sends a jolt through Fatso’s spine. His immediate instinct is to adopt the fudo dachi pose – the international warning to putative attackers that Karate is Known Here. It is not lost on Rosa3 who has seen enough martial arts movies to be wary of this weasel of a man. Also not lost on her is that this interloper’s apparent close inspecting of Masters’ lockers might suggest a motive not unlike her own. With the local constabulary breathing down her neck, she has no time to mince words. Deals must be done.

Fatso has enough feral presence of mind to not disclose the fact that he is shitting himself and would probably have done a runner had his preternatural fear of strong women not anchored him to the spot, fake karate pose notwithstanding. This woman is particularly disturbing. She is dressed like a suburban hausfrau in clothing that, had he been asked to describe it seconds later, Fatso would be unable to.

‘I know where the @#$%ing [see above] keys are!’ burst from this vision of ordinariness like an unwanted pip from a mouthful of watermelon.

‘I have the keys to the Roller,’ brogued Fatso for no particular reason other than it just seemed like the right response. ‘Sixty:forty my way,’ he added.

‘Fifty:fifty!’ she squalled, ‘or I start throwing things!’

In the body of the church, Pria Kristen and McKeever are dancing the merry dance of memory around each other. Each is circling closer to the incident at Jakarta’s Best Boogey Baby Boom Room nightclub which won McKeever a brief stay in Java’s Sukmiskin prison, and Pria a banishing to Melbourne by his incensed father, Indonesia’s Minister for the Interior. They are one station short of a mutual ‘Oh, @#$% [again] it’s you!’ end-of-the-line moment, when a visitor interrupts their musings.

‘Hey bro,’ says a rattle coming from a skeleton propped up by a crutch made from plastic drainage piping with a bicycle seat affixed to the top and protruding from an offensive armpit, ‘you holding?’

‘Uh?’ gurps McKeever at a squirmy Kristen, ‘seriously? You’ve got a side hustle?’

‘Better deal with your flock, Reverend Disappointment,’ he growls, pointing the way to the exit in a manner he rather imagined The Lord might have used to direct Adam and Eve to the back gate of the Garden of Eden.

That Kristen is now removed from this narrative into another where he will accept a modest profit from a grubby little drug deal, will infuriate him at a later date when he discovers how close he was to a decent payday. But that, dear reader, is the gift of the author searching for a way out of this.

Rosa is leaning over Masters, testing his vital signs when McKeever McKeevers through the door that separates the airlock from the nave of the Church of the Mighty [War Against Satan HQ!!]. This new wrinkle sends her nervous system into 8.3 on the Spasm Scale and allows her mouth to release a further torrent of abuse.

McKeever blanches and before his irresponsible hands can inflict any regrettable prison-sized damage, Fatso steps between the two, introduces McKeever and agrees that her share of the blag remains as they agreed. He will sort the large interloper. In the mayhem, Masters has collected an errant McKeever-sized foot in there back of the head and has been coaxed back into the unconsciousness he was about to erupt from and spoil everything.

[While it was something we all would have liked to avoid, it became necessary, plot-wise, to keep Masters asleep. Moreover, it allows us to feed the hapless carpetbagger to the hungry coppers, who will arrive soon and will need some reward for their diligence.]

Rosa has an idea. She urges the two men to shift Masters on to his rare Victorian fainting couch – a $25,000 ‘gift’ from devoted parishioners – then she quickly scrawls a note addressed to the pending plod that reveals Masters’ true identity [well, one of them]:

‘Here lies Colonel Steve Roper, the grifter who offered the gullible the opportunity to purchase 100,000 containers of Air-From-The-Moon for just $19.99 [or two for $29.99 while stocks last!]. His fingerprints will tell the tale of other crimes and misdemeanours!’

Rosa tucks the note into his open-necked shirt and weighs it down with the ostentatious ‘gold’ necklace that appears to be partly strangling him, resisting the temptation to bite it to determine its value.Then she retrieves the lockers’ key from a hook behind the Jesus effigy attached to the back wall. Momentarily, Fatso wonders why he hadn’t noticed the foot-high statue of the Saviour dressed in jeans and a tee shirt, his left hand flippin’ the devil-horn sign for rock ‘n roll, His shirt telling the viewer, ‘I am the rock’.

Rosa bounces from locker to locker popping each door and revealing the neatly stacked blocks of carefully wrapped and branded [Church of the Mighty (War Against Satan HQ!!)] bricks, each weighing in at $10k. There were 25 bricks in every locker and there were 11 lockers.

‘We will take de roller,’ Irishes Fatso, while McKeever loads the carrier of his motorised wheelchair with brick after brick. Gathering up the spillage, Fatso and Rosa follow McKeever into the carpark.

Detective Sergeant Bryan Paterson begins to breathe again as the silver Rolls Royce Phantom, registration number 14MGD with its giggling occupants swoops from the northern exit of the Church of the Mighty [War Against Satan HQ!! ] just as Constables Might and Mayne, lights-a-flashin’, arrive through the southern entrance. ‘No point in anyone else seeing that,’ Paterson jabbers to himself as he turns the digital record into an incomprehensible set of pixel gibberish with the electro-magnetic dispersal wand he waves like a wizard.

It’s not hard for Paterson to follow the trio’s breadcrumbs as the Roller passes beneath each of the CCTV cameras, that had been carefully installed throughout the State by a paranoid government, on its journey to a small Gippsland farmhouse, abandoned and cold in an overgrown paddock with a Rolls Royce Phantom-sized crumbling shed behind a copse of trees. Nor is it difficult for him to close each evidentiary door as the gang passes through it. Finally, the simplest task of all was to offer his resignation to senior command citing ‘task incompatibility, colleague dysphoria and recombinance’ – the latter to remind them of his ability to allow his mind to drift into incomprehensibility suddenly and without warning. They accepted immediately and without a murmur, made easier once they worked out who he was.

And now we find Paterson reclining in the garden suite of the Bawah Reserve [US$1980 per night] on the Anambas Islands of Indonesia, decked out in arrogant 100-pocket pants over white post legs stuffed into grey socks protected by velcro-sealed drab sandals. His singlet advertises a popular beer and on his wrist is the brand new Rolex he bought for a song from some dumb kid on the beach, who clearly didn’t know the value of what he was offering for sale. Paterson is watching two screens at the end of his ludicrous bed – one shows the current state of his substantial investment in bitcoin [buoyant!], the other a news bulletin from Australia where three people have been found alive and angry in an isolated Gippsland farmhouse, their arms and legs immobilised by police-issue plastic ties…