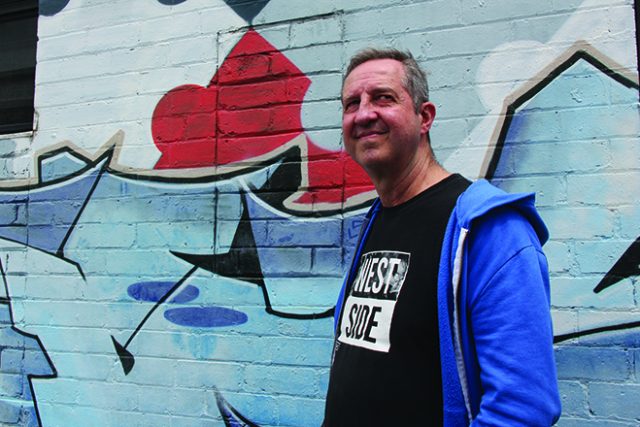 West Footscray scribe Stuart Page’s name has been bobbing up on our screens and elsewhere for years, but with the recent screening of the highly successful and acclaimed ABC series Total Control starring Debra Mailman, Rachel Griffiths and Aaron Pederson, he’s been thrust into the national spotlight. Time for The Westsider to meet the man and find out what makes him tick…

What was the first thing you wrote?

My first TV gig was on Blue Heelers. I was a script editor – we did everything from tweaking dialogue and action to replotting and rewriting entire episodes when they ran into trouble. I also wrote some episodes under my own name. I was 39 when I started that job – it was my first proper gig, and my poor Mum had long since accepted I’d never amount to anything.

Your screen credits go back 15 years – were you always a writer?

The first things I ever wrote were poems (because that’s such a great career option). When language is used in particular ways – in poetry, songs, drama – it becomes something more like a prayer, like a spell. That sense – that language can be transcendent, and at the same time tell us essential things about ourselves – has always been at the heart of why I write. From there I wrote songs, and played in bands for years. Then I wrote an unpublished novel. A couple of plays. Then short films. Then features (never made). And then TV. So yes – I’ve always been a writer.

What part of your background prepared you for this career?

Growing up and living in Brisbane in the 70s and 80s, it was the Bjelke-Petersen era, very right-wing, and being in that environment inspired us to become educated – about politics, art – and a kind of counter-culture thrived under those conditions. Then so many of us moved away to cities like Melbourne where we could live those lives and grow.

How did you get into writing for TV?

I realised, at 32, that I was never going to make it as an Indi music star. (You’ll probably start to see the pattern here in terms of my career goals: poet, Indi music star… ) . So I cast around for what to do with my life, but even though I was looking for something that might employ me, the only thing that drew me in was a screenwriting course. So I took a few subjects – and I started getting somewhere: funding for new writers (through Film Victoria). And some work here and there. An animated short film I wrote (directed by the brilliant Anthony Lucas) got into Cannes. Then a friend mentioned that a mate of theirs was leaving their position as a Script Editor on Blue Heelers and they needed a replacement immediately, and that changed everything for me. It was an actual job. I was seeing my work produced. And my Mum could finally start to think that maybe it had been worth it after all. It was seven years from when I took those first screenwriting classes. It was serendipity that saw me land that first job. But in a lot of ways, I’d been preparing for it for a very long time. I’d always written. I’d often collaborated (bands are usually a massive lessons in collaboration.) I was already used to the idea that I could use words to take people to different worlds. I was terrified when I started. But I was ready.

Has the streaming phenomenon opened up new opportunities for Australian writers?

Yes, it has. The types of stories we can tell on screen has changed utterly, because it’s no longer driven by a mass market, appeal-to-as-many-demographics-as-possible business model. But we need to make sure the streamers make our stories. We have local quotas on free to air networks: they have to produce a certain amount of Australian content each year, and they complain loudly about it, but if those quotas weren’t in place they wouldn’t make any Australian shows. We need to make sure the streamers also have local content quotas – because there is a huge amount of Australian money going to them. And we need to make sure that happens now. Lobbying your local members is a good place to start.

What advice can you give to others who have aspirations in this space?

Keep writing. It’s a craft that gets better the more you practise it. And keep sight of what makes you want to write. Be curious and open, and be engaged: with the world, with the writing that other people are doing, with other people. Take courses, make friends with other writers, read their work and support them (because they’re your network, and they should be doing the same for you). Don’t fall into the trap of thinking ‘I must suffer for my art, I must give up everything’. No one is going to reward you for being a martyr. And living a life will give you something to write about. Learn about the local industry: who writes and makes the shows, how they’re made. Talk to the people who make TV. Offer to buy them coffee so you can pick their brains. And so they can meet you and maybe bring you into the next story room they’re running. Be ready for when you get the chances that come your way. And seriously – keep writing.

Total Control delves not only into the machinations of politics and the limitations of democracy, but also the relationship Australia has with First People. Was there a lot of research involved or do you have prior experience in these areas?

Research can give you so much, and is vital for a show like this. We talked to staffers, experts, speechwriters, heads of organisations, policy wonks. We talked to people on the ground, who are affected by the decisions that politicians make, in communities, in detention. But equally critical is everyone’s lived experience, and that’s what animates the facts. Rachel Perkins, our director; Miranda Dear, our producer; our writers Pip Karmel and Angela Betzein, myself: all of us bring a huge and varied range of lived experience to the process, and you mine that for all it’s worth. Personally, I’ve had – and still have – a huge amount to learn about Indigenous history and experience. I think that’s true of a lot of white Australia. A lot of voices in our media tell us to be resentful and angry at an idea like this. I disagree: I love that my work allows me to learn about our country and our history, and think about our future, and to bring my own experience to bear. And I think that the way the show has been embraced demonstrates that a lot of people feel the same. One more thing about research. It’s really important. But it means nothing if the show itself isn’t a huge emotional and intellectual ride. That’s what we wanted to give people. I hope we’ve succeeded.

Will there be a sequel?

Do you ever see the final product adapted from your script and think “Oh why did they do that…”?

All the time. There are all sorts of reasons why things change on set. Sometimes it comes down to simple contingency: a thunderstorm means the production team have to find another place to shoot at short notice, or the actors can’t say their dialogue because the place was crawling with flies and they can’t open their mouths, or an actor breaks their leg partying (that’s happened on at least two shows I’ve worked on.) There are other reasons why things get changed. Sometimes people on set don’t always understand what the writing team is aiming for. Or they see something else they want the scene or the sequence to be about, and decide to take it in another direction entirely. And there are a lot of voices brought to bear on scripts and stories. It can be such an exhausting process. Sometimes good material gets doubted to death. BUT… film and TV is collaborative. It’s a team effort, driven by a lot of amazing individual efforts. And at its best, all those individual efforts combine to make something far greater than simply the sum of its parts. That’s what you hope for. To see a scene, or a sequence, or a show, and to realise that the team has taken your work and made it something a thousand times better.

What are some satisfying moments you’ve had seeing your work come to life on screen?

Seeing Total Control be so embraced has been a wonder. The sense that I get is that people want to talk about these issues. They want to think about them. They want our country to start dealing with them. They want this country to be a better place. But our public discourse – polarised, resentful, victimising and shouty – fails us. I think the show, in its own way, is part of the dialogue that people are looking for. And to be part of a show like this, to be part of the team that made it, is an enormous privilege.

How long have you lived in the west and what do you love about it?

16 years. We moved here when in 2003, just before our second child was born. We’ve got three kids now. They’re all proud Westies – according to them, anyone from the other side of the river is a posh twat. I love that it’s a community – lots of kids, families, nationalities. I love that our street goes mad during Halloween. I love that the west has its own sense of identity – quirky, chip on the shoulder, welcoming and unpretentious. And I love that it’s welcomed all of us. It’s home.

Some of your favourite hang outs?

Pod at Post Industrial Design. Lunch at Dhosa Corner. Basketball at Teddy Whitten. Takeout for the family from Roti Road or Viet Kitchen. And when we can manage it, a quiet dinner for just my wife and I at Small French Bar.

Season One of Total Control is available now on ABC iView.