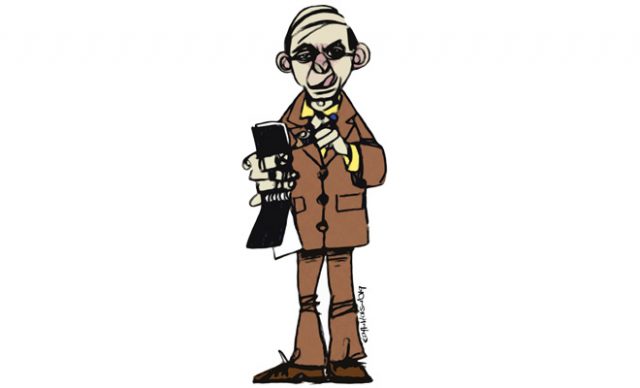 Things are getting out of hand here at the Church of the Mighty [War Against Satan HQ!! ]. ‘Character scatter’ has set in and participants are sprayed in all directions. Lumpen McKeever, in his clumsy bid for a lifetime redemption pass, has knocked himself out cold and is lying face down – prone before pinch-hitter preacher, Pria Kristen. Kristen’s ‘pulpit’ is being rushed by a lit congregation which has confused McKeever’s ponderous clodidity with a miraculous intervention from above, or below [or wherever that sort of stuff comes from]. Brother Jimmy Masters, in his desperate attempt to thwart Kristen’s swerve towards veneration, finds himself spread-eagled over a large metal money box earnest ushers have left in an airlock between Masters’ hideaway and the nave of the Church of the Mighty [War Against Satan HQ!! ]. Fatso, behind Kristen’s stage, is inflating the numbers in a redundant nativity scene, while bearing bemused witness to these shenanigans. He is struggling to keep focussed on the main game: relieving the Church of the Mighty [War Against Satan HQ!! ] of the better part of its substantial Easter income. Elsewhere, Masters’ ‘personal assistant’, Rosa Flow, has climbed into a bottle of gin and is musing over her own plans to lighten the church’s fiscal load.

[In the future, improbable investigator Detective Sergeant Bryan Paterson is deeply conflicted. Having developed an unlikely affection for Roger Alan McKeever, he finds himself barracking for this arrangement of catastrophes contrived to resemble a very large man. He even idly considers emulating McKeever’s fondness for high-vis, cone-shaped hats, but worries it might compromise his professional integrity, such as it is. Fearing the worst for this new-found bromance, Paterson is weeping before his computer screen that shows a flickering image of the prostrate hillock of McKeever.]

I think that’s everybody…

As a student, and throughout his life, Bryan Marion Paterson had two beacons to light his way.

The first was his middle name. His dimwitted father chose ‘Marion’ in the misguided belief that the Johnny Cash song A boy named Sue was a message to him personally. Not willing to test the reach of the litigious Cash family, he chose to attach to Bryan junior the moniker that the much colder John Wayne [Marion Robert Morrison] was born with, in the sure knowledge that it would reshape any milquetoast tendencies in the boy into those of a hard-fisted manly man. To his father’s chagrin though, Bryan found that he could easily escape the relentless bullying offered by his schoolmates, once they had pounced on his ‘girl’s name’. This was achieved not by some skillful pugilism, but through a king tide of rippy circumlocution in which antagonists would quickly drown.

This flair for excessive incoherence announced his second advantage. Knowing little, but saying much, had the added perverse effect of opening doors that might otherwise have remained closed. The sheer volume of unrelenting twaddle that issued from his gob, beat the doorkeepers into senseless submission. To see his back disappearing, and to recover some of the oxygen that Bryan had plundered with his yap, these Concierges of Standards were happy to just wave him through.

His acceptance into the police force came when the rozzers had their guard down. A disgruntled employee, Superintendent Bernie Flaugh, was hunting for a dish of cold revenge for an organisation that hadn’t celebrated his Direct Policing Method of Crime Solving, ie. Beat Until a Confession is Extracted. And then, Bryan Marion Paterson walked into the recruitment office where Flaugh had ignominiously been parked [he knew too much to be fired] and began talking.

Flaugh recognised that his opportunity had arrived.

Bryan’s rise through the ranks was nothing short of a seamless set of rewards for incompetence. Every time he was sidelined, cul-de-sac’ed, dead-ended or blank-walled, he would gabble his way back into view and another exhausted sap would be left with the challenging task of burying him again. Somewhere, Flaugh was laughing his arse off.

It was this career path that placed Detective Sergeant Bryan Paterson at the head of the task force charged to uncover the truth behind the Great Easter Robbery of the Church of the Mighty [War Against Satan HQ!! ].

Fatso was in a bind. Should he return to the body of the Church of the Mighty [War Against Satan HQ!! ] and attend to McKeever, his fallen comrade, or plough on with his mission? It seemed reckless to him to have come this far and ignore the substantial rewards a mere hop, skip and jump away. Besides, if McKeever’s clumsy worship had done him some serious medical inconvenience, bountiful coin might be necessary to get him back on his feet. It was a no-brainer. Fatso decided to till the soil in front of him.

Extracting himself from the nativity scene, Fatso reached the red door in two wonky strides. He flipped the hidden panel and keyed in the access code. 14MGD. The lock clicked free. Fatso shoved the door open.

On the other side, a stunned Brother Jimmy Masters was lifting himself off the black metal cash box he had tripped over, only to have the door slam into his head and return him to oblivion.

‘Dis can’t be good,’ mused still-Irish Fatso, closing the red door behind him and lifting the hapless preacher off the treasure chest and propping him against the wall. A quick check of vital signs reassured Fatso that Masters would survive this indignity with nothing more than a profound headache.

Then, through the opened door at the rear of the airlock, in what appeared to be a concrete-lined bunker, Fatso noticed rows of lockers so black they seemed to absorb all surrounding light rendering them practically invisible. If it hadn’t been for the low afternoon sunlight issuing through the windows of Masters’ hideaway on the other side of the vault, Fatso would never have seen them at all.

Rosa Flow was enjoying a fourth gin revelation. She had tolerated Brother Jimmy Masters’ entitled braggadocio enough. When she first encountered this spiv, she saw him as an easy mark. The low-rent carpet bagger was a snack for the sophisticated Flow flow and his scam was juicy enough for her to dig in, await the opportunity to restock her larder and move on. But her suffering of his blabby conceit and adolescent fumbling had unexpectedly exhausted her. The wealth he had secreted in his bunker would have to do.

Rosa just squeaked through the red light. She only half noticed it and put it down to exuberance. She fully didn’t notice Constables Might and Mayne parked in the Childcare carpark next to her building, just waiting for an opportunity such as this. Bonus that it was a top shelf Beamer.

It was Mayne who took pleasure in handcuffing the mouthy driver who just registered 0.282 on the blow stick and then emptied her gab bag of its collection of foul epithets all over his head. But it was Might on the police car radio that heard the arousing [well, to a copper] words, ‘considerable outstanding warrants’, come back at him on identifying the driver to HQ.

Rosa was in a dark place.

[Detective Sergeant Bryan Paterson was disappointed on stumbling across the body cam footage of Rosa sharing her bountiful potty mouth with Constables Might and Mayne. He had this woman stitched up for the entire burg. Her moral elasticity did not escape the Paterson forensic stare and it was this alone that, in his singular mind, had her banged up dead to rights. Problem was, she was trying to negotiate bail from a testy magistrate, while an insistent prosecutor kept mumbling the mantra ‘flight risk, flight risk, flight risk…’ as the piggy bank at the Church of the Mighty [War Against Satan HQ!! ] was being emptied.]