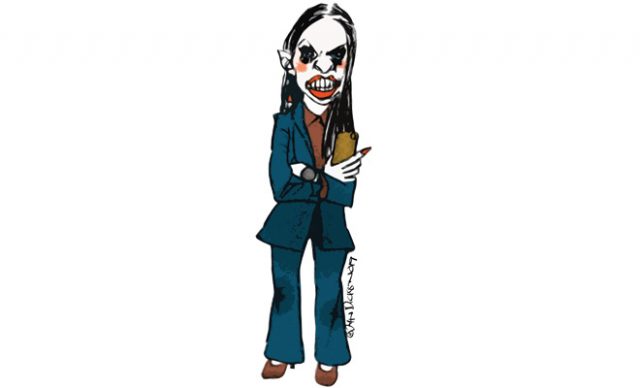 This boost to Kristen’s steam was certain to rile Brother Jimmy Masters further, once he surfaced from the low nap his wealth review, and necking of several goblets of fine Scotch whiskey, had consigned him to.

This shift in Kristen’s fortunes would also cause Master’s secretary and boon companion, Rosa Flow, to further review her own plans, once she learned of its fallout. For the moment, she is contentedly sipping gin on the generous balcony of her 15th floor apartment dreaming of a better life.

[Up to his wallopy cop boots in hindsight, Detective Sergeant Bryan Paterson is urging McKeever on to the light as the conical clown staggers across Paterson’s computer screen. This oafish copper, assigned to the case of the Church of the Mighty [War Against Satan HQ!! ]’s vanishing fortune when no one else would barge-pole it, is making disturbing little grunting noises of encouragement while his colleagues don jackets, gather bags and tiptoe towards the door.]

It’s not that Rosa intended to cut corners to pursue a life of ease, it just seemed a more obvious route than the bureaucratic faddle of doing-it-the-right-way. Ask her, she’ll say she was fourteen when she first noticed that men tended to just take things. Her moral compass was set by her father whose go-to pastime was to ask shopkeepers for some random product that would need to be sourced from a backroom. This allowed Alfie ‘Fingers’ Flow time to purloin a stack of notes from the cash register. When he started removing entire cash drawers, Rosa innately recognised that this was a dying sport, and the advent of digital transactions confirmed it. It took her even less time to realise that the law of diminishing returns should have signalled to her careless father that his skill set was now redundant and that his next experience would be ruin and endless days of free porridge courtesy of HM the Queen. Which, of course, it was. It wasn’t such a great leap for her considerable intelligence to deduce that there must be a better way. And so began a life of careful accumulation of other peoples’ wealth.

Not particularly concerned with feminism, unless it provided forward momentum, Rosa deliberately inserted herself in a ‘mans’ world disguised as a pliant attractive woman. Armed with a wide-ranging business education – no formal qualifications, too time-consuming – cherry-picked from that on offer from the better universities, which she would attend without the burdensome need to actually enrol. She became well-known as an insightful student who would Hoover up knowledge at an exhausting pace, quickly eclipsing that of her teachers, but with an added talent for immediately identifying shortcomings, loopholes and escape routes. Had she settled long enough for anyone to review her progress, they would have seen a student hell-bent on Finding The Easy Way Through. None ever did. She was already gone.

As an eighteen-year-old, Rosa joined the Massiveplex Development Corporation disguised as twenty-something Trini Baxter, Future Consultant, and armed with a sheaf of appropriate qualifications carefully forged deploying skills appropriated from a graphic design course she exploited just for that purpose.

It was she who negotiated the sale of a piece of prime river frontage, formerly the site of a secondhand ‘emporium’, from a colourful local identity, who never owned it in the first place. Shortly after the sale was settled, Steven Maurice Beltway, the unlikely owner of Belty’s Bazaar: It Could Be Here!, had vanished, along with the sale proceeds, believed to be in the millions of dollars. He left behind a new wife and two step children, who claimed to be twins, weeping inconsolably down various news cameramen’s lenses. Soon thereafter, they too could no longer be located.

Careful not to attract the unwanted attention of various law enforcement agencies, Rosa quickly converted her end of the profit into bitcoin, buried them in encryption and launched them into the webosphere, where they too promptly ‘disappeared’.

Pria Kristen felt the air leave the pews as his rapt congregation held its collective breath, hypnotised by something to his right. He sensed a great dark shadow looming towards him. A visitation perhaps? A portent? No, it was the silhouette of a large man with an conical shaped head lurching towards the stage, arms ending in curiously large hands reaching out for salvation. McKeever had abandoned his wheelchair and was lumbering towards Kristen to receive the glittering prize the Indonesian preacher had promised, should he care to surrender himself to a higher authority. In his own singular view, McKeever had confused redemption with a lifetime pardon for any crimes he may have committed, or was likely to commit. It was then that he prostrated himself before God’s messenger, misjudging the distance to the edge of the stage and knocking himself out cold.

‘Nice woik,’ muttered Fatso. While it had its shortcomings, this was the kind of distraction Fatso had hoped for that might deliver him the opportunity to explore further where the ‘gifts’ [cash only] from the believers might be stashed.

Slipping behind the stage, his curious gait giving the impression that his forward propulsion was driven by him rocking from side to side, Fatso arrived at a red door, lit from behind. The door was locked. Voices coming from behind allowed him time to hide among props left over from significant celebrations of the Church of the Mighty [War Against Satan HQ!! ]. He found himself squatting beside a life-sized Balthazar, the wise man kneeling to offer the baby Jesus some gobbets of myrrh.

The two white-shirted attendants carrying the black metal box between them, did not notice that the three wise men had become four, such was their focus on an argument over whether a dented skull retained the same surface area as a whole one. The taller of the two reached to the top of the door frame where a button opened a flap revealing a keypad. He punched in a code, which Fatso immediately recognised as the registration number of a brand new Rolls Royce Phantom he couldn’t help but notice in the carpark, and opened the red door. The plate read: 14MGD.

Brother Jimmy Masters heard the distant commotion coming from the nave of his church. His church, not Pria Kristen’s church. He flicked on the monitors mounted over his desk. ‘Oh, Christ,’ he said to himself as he watched from nine different angles the congregation appear to rush the stage. This sort of group hysteria can only be tolerated if Brother Jimmy Masters, Exalted Evangelist of the Church of the Mighty [War Against Satan HQ!! ] is its subject. Struggling into a powder blue smock and tossing a heavy golden chain weighted by an ostentatiously swollen gold coin [fake], Masters ran through his still-open concrete-lined vault to a black door at its rear.

In the airlock on the other side of the door, the two attendants had placed the large metal box in Masters’ path, as per the regime dictates of the first law of the Church of the Mighty [War Against Satan HQ!! ], Collection of Funds. The taller closed the red door on their side of the gap and, still absorbed by their increasingly loopy argument, the pair returned to
the church.

Fatso heard the thump behind the door. It sounded like something substantial
had fallen.
[Sometime in the future Detective Sergeant Bryan Paterson is now openly sobbing before his computer screen at the sight of his champion, the large convert now prone and still before the clearly horrified preacher, his orange conical hat cast aside as if directing traffic around him. ‘Oh why, oh why has thou forsaken him,’ Paterson is pleading to an empty office.]