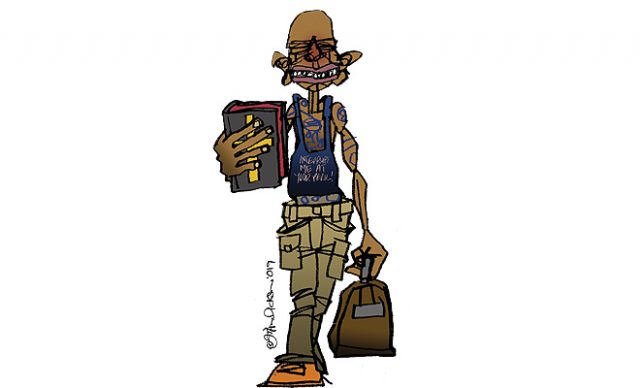 ‘Oi McKeever, got some t’ing,’ Fatso fiddle-de-dees on tooth-rot breath from a gurning face, tats threatening pencil neck out of a t-shirt that warns the world, Interrupt me at your peril!. And under that t-shirt and under those 100-pocket pants, inked into coarse skin stretched taut over bone, the greatest hits of the bible. Thigh-bound, Adam and Eve stare upward at unreachable forbidden fruit arranged artfully around his groin; across his belly Cain chases Abel; his right nipple forms the bell of a Jericho trumpet; David peeks out from his left armpit; Solomon on the right shoulder stares balefully at his father; there’s Daniel with his lion, Jonah with his whale and locusts everywhere. On his back, chastened money changers charge across his buttocks; and Christ, in a strange conflation of narratives, staggers across palm leaves, an awful burden across his back. McKeever can’t see that diorama right now, but he knows that
it’s there.

Now the swamp whiff is coming off his friend and already McKeever doesn’t like what Fatso is about to talk him into.

Pria Kristen turns off the vacant sign on the roof of his cab. Mouthy drunk man was the last straw. Maybe an hour with Brother Jimmy Masters riffing about forgiveness would clear the air. He could see the sign from two blocks away: The Church of the Mighty, with its unique selling proposition, War against Satan HQ!! both neoning at the world. Pria wonders whether two exclamation marks are a slight overreach, but decides Brother Jimmy knows what he is doing.

The vast carpark is empty, apart from the silver BMW driven by Masters’ secretary, Rosa Flow, and, alongside it, Brother Jimmy’s new Rolls Royce Phantom [$450k out of the box, if you’re wondering].

The sodium vapour street lights turn orange the red leather satchel that Pria removes from the boot of his sad cab. In it is his latest sermon. He knows that Brother Jimmy will critique it for its lack of fiscal insistence, but will wave it through anyway. At least for the Saturday matinée.

He runs it through his mind: ‘Brothers and sisters! Leave room in your lives. Leave a door, a window open for the fresh breeze of welcome. When strangers call and they are hurt, and they are emptied out, gather them into your lives. Find them seats at your table. Find them pillows for their heads, a blanket for their shivering bodies. Open your arms to the other and you will know Jesus. And they will know Jesus. And Jesus will know you and when he returns, as he will, you will be smiled on by Him and you will be saved.

‘I am reminded of a small boy in Indonesia, who had over time harvested the complete works of Enid Blyton. He adored them. He coveted them. From Noddy and Big Ears to the Famous Five and the Secret Seven, they were his succour, his guiding light. But when a poor friend asked to borrow them to lift the spirits of her sick sister, he refused. That same day, as he was trawling the Jalan Surabaya Flea Market in hungry search for more from his favourite author, lightning struck his family home and it was burned to the ground. His Blyton collection was lost. Only one thing survived that conflagration: the family bible. And as he read it, and as he realised the error of his ways, he resolved to restore his collection and offer it as a library to all the children in his neighbourhood. This he did, and to this day the Pria Kristen Blyton Library remains open to the children of Jakarta. Praise Jesus!’

Should parables be true? The open library in Jakarta was a bit of a stretch. While he still had the collection, it was secure in fireproof cabinets in the basement office of his unlisted address in Caroline Springs. It could be viewed by children, but only his own – provided they were suitably gloved and had earned this honour through obsequious domestic toil. He would, of course, allow Jakartan children full access should they manage to find their way to his substantial, anonymous home.

Pria has now reached the imperious studded door that guards Brother Jimmy’s lair. He knocks and lets himself in. A room at the far end of a long, plush corridor is dimly lit. The noises emanating from that room suggest that Pria should announce himself before going any further.

McKeever can’t yet tell whether Fatso is oiled. He promised he wouldn’t after the January puff crisis, but McKeever [rightly] took that with a couple of cokespoons of salt. He says this:

‘Listen, if you’re going to twat me up with another ging crisis, I am deaf.’

‘Would yer be wanting to be a rich fella now, would ya?’

This is a crisis moment. Yes, McKeever wants to be rich. Who doesn’t? But is this a case of a simple multiplication of assets, or is it a chance for the big grab – a unique opportunity to exploit an as yet overlooked fracture in the space/time continuum through which wealth pours, but only for the hardy and the brave?

It turns out it’s a straightforward blag.

‘T’ink about it,’ says Fatso, eyes hooded, face righteous, one arm hipped, one arm waving vaguely, ‘t’ink about dis.’
And out it comes. It’s Easter. Churches are full. Wallets are emptying at the behest of insistent preachers alerting supplicants to the very real possibility of a short cut to you-know-where should they see the wisdom of tipping their hard-earned into a receptacle that is now making its way amongst the faithful. No cards, just cash. And it begins on Easter Sunday and lasts until the day of Pentecost.

There is no hiding the sounds of the urgent struggle to dress quickly, to find that shoe, to adjust makeup, return hair to unremarkable stylings and tidy the collateral damage that occurs after two consenting adults have been at it. Unless it is Pria who bears witness to the aural fallout of this encounter. Pria’s Blytonesque view of the world will not allow him to make those kind of connections. He only hears endeavour on behalf of the flock and the Lord, and Brother Jimmy is not about to dissuade him from that view.

‘To me, perhaps,’ says Cyclone Rosa as she storms past the two men clutching things that signal an immediate departure. Brother Jimmy’s futile attempt to slow her from beneath a slightly skew-whiff rug completes his humiliation.

‘Goodnight Miss Rosa,’ says an unerringly polite Pria to the slamming front door, leaving the two men alone on either side of an awkward silence.