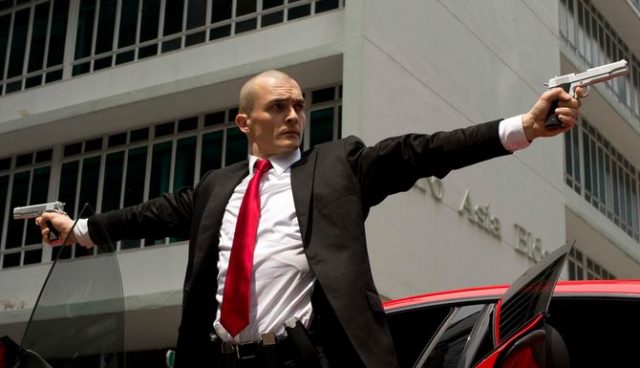 Fans of the popular I.O Interactive game franchise “Hitman” got their first glimpse of the new film trailer, of the reboot of the 2007 film that starred Timothy Olyphant as the title role of ’47’, who will not be returning to play the infamous Hitman.

First time director Aleksander Bach, who has the film set for an August release, has already sparked debate among fans voicing their disappointment at the possible storyline, actor choices and even the location and size of the signature bar-code tattoo on the back of 47’s shaved head.

Translations from games to screen is often met with harsh critique and this is no exception. The trailer introduces the audience to 47 in a small, dark interrogation room, after he is captured through a metal detector carrying his signature customised Silverballer Pistols. However the first shot we are to see is of that classic bar-code. We see the top of his shaved head as the camera pans down, getting closer and closer, building the anticipation to see that bar-code tattoo…which has been ruined. The key element of 47 that makes him THE HITMAN and the bar-code has been designed far too skinny and has placed low on his head (almost on his neck).

This was just the first of many things wrong with the trailer that fans were evaluating. In the same interrogation room comes an effect that looks like it belongs in a Michael Bay film it’s so far fetched. 47 kicks the underside of a table causing a sniper rifle on top to fire. Sending the bullet flying towards himself, he raises his hand exposing a chain trapping him to the table, that then gets hit by the bullet, freeing him to injure and possibly kill all his interrogators. Really?! Okay! I get that he’s an almost superhuman clone but this already caused a loss of faith in the film. I mean, come on! Plus they are not making him the ANTI-HERO he is, but instead making him the villain from the impression of this trailer.

Not to mention the fact that the new 47, Rupert Friend, looks far too young for the role. The voice is close to that of the original voice actor from the games, but it seems he is better suited for a flashback version of 47 at a younger age. He may be able to pull the stunts and everything else off, but from the brief look at his acting choices it looks like the audience will be looking at a stone for the whole film. The basic special effects we have glimpsed in the middle of the trailer seem to be well thought out but from the B-Reel of a Michael Bay film. That’s not saying they’re bad, just saying it might be the only draw to the film at this point. Lots of explosions, lots of guns and lots of carnage, it’s essentially the signature of any typical Hollywood action film from this past decade.

Fans voiced their steadily increasing disappointment on the films new poster, which has been shared on Facebook and other social media. Posting comments such as; “This poster embodies everything wrong about this movie” and “I have no faith in this movie at all”. So it seems the logical thing to do for this film based on fan reactions and the general empty and diluted feel of the trailer, is to save your money and wait to buy or hire it on DVD. However this is the initial look at the trailer and cannot be seen as a full review. Only time will tell if it will be worth it.