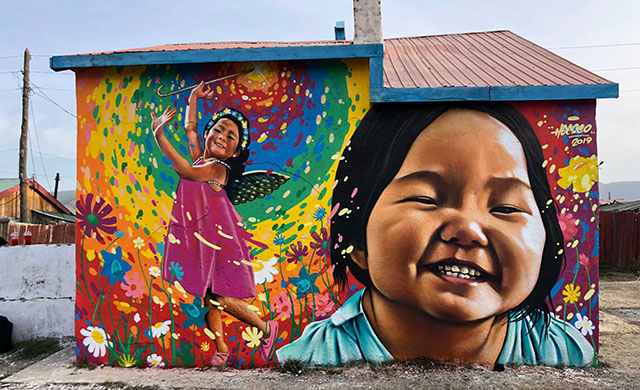 So, what do you do? is an ongoing series exploring unusual careers in the inner-west of Melbourne by Belle Hann.

It is safe to say that Melbourne wouldn’t be the same without street art. Even a casual walk through the laneways (back when we could!) exposes you to the work of some of the world’s best street artists.

One such artist is Heesco, whose street art is a familiar sight across the inner-west region. You may be familiar with the huge woman in traditional Mongolian costume with an iPhone displayed on the Victoria University Nicholson Street campus. Titled Ms Citizen of the World, Heesco was commissioned to paint something that reflected the glorious diversity of the campus.

“It was a rare occasion where I got to paint my own unique design,” he says. The artwork was a huge undertaking, involving image scaling, grids and boom lifts to paint the five storey building. The hard work paid off, as Heesco won the Footscray Art Prize for Street Art. He also considers it one of his favourite pieces.

Drawing began as a form of escapism from the harsh conditions of communist Mongolia. “As a kid, I really enjoyed drawing, and always just wanted to sit and draw.” He learned the basics of drawing proportions and human anatomy from his father, who is also artistically gifted. His interest in artwork was cemented when he stumbled across comic books. “I would lose myself in those pages and try and draw like the artists, copying line by line. Part of me is still stuck in that juvenile brain!”

Heesco has now worked as a full-time artist for around eight years. After graduating from Sydney College of the Arts in 2005, he worked in gigs in signage and hospitality, including a stint as a teppanyaki chef. Yet a whole new world opened up to him when he was introduced to street art.

“When I started painting walls, something clicked, I guess. I felt I was in my own element.” he says. “I enjoyed painting outside and painting big.”

In his early career, he did lots of walls for free. “Anyone who had a wall, I would offer to paint it and cover all expenses myself…That’s how you build up your profile, I guess. The more you paint, the more people see (your work.)” This led to a coveted spot at The Blender Studios, the epicenter of Melbourne street art, and was a huge first step in his career.

Heesco found that the social aspect of painting outside comes with a certain learning curve. “Art making in general is usually pretty solitary and private in one’s studio…Painting outside is very different. Any of your mistakes, people can see, so you work under pressure. And I enjoy that because it makes you learn faster, you try harder, you focus better.”

Most of his work these days is commission-based, however Heesco notes that there have been times in his career when his work was perhaps not as welcomed. He has been yelled at and chased away mid-artwork, even if he has been painting in some “dodgy laneway.” “You hope that it is okay, and you pick spots like a neglected alleyway with a bunch of tags, but sometimes, if you time it badly, someone turns up and they are not happy to see someone vandalize their property.”

This raises the question: is there a difference between graffiti and street art?

For Heesco, he sees street art as a continuation from graffiti culture. “Everything started with graffiti…The success of street art is always because it has that element of vandalism or illegal art, and that’s what sort of sells it as well.”

And while it may look easy, Heesco notes that wielding cans of spray paint is actually quite difficult. “Spray paint is not an easy medium to use, “ he says. “It takes years and years, and it’s something I really respect in other artists.”

Lockdown has not been easy for Heesco as he has been unable to get outside and paint. Though devoting time inside to his young family, he confesses to feeling “quite ansty.” “I can’t wait to get out there and start painting again”

One last question: Heesco, are you actually Banksy? He laughs, but denies it. “I wish!”

View Heesco’s artwork and learn more about this great artist at www.heesco.com