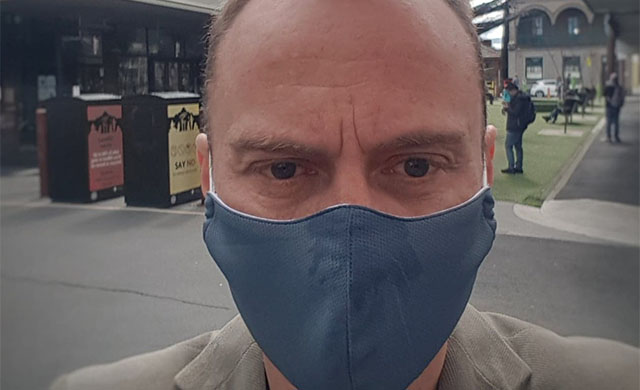 A recently published report into air quality in Melbourne’s Inner West shows that our air pollution problem is ‘widespread and alarming’ and we are all at risk of significant health concerns because of it, says Peter Wingate, Yarraville resident and Progressive Candidate for this month’s Maribyrnong Council elections. He goes on to say that Local and State Government ‘must address the issues as a matter of urgency’, and is pushing for immediate action including a commitment to filtration of pollution from the new Westgate Tunnel, and a community-accessible real-time environmental monitoring system similar to the one recently rolled out in the Latrobe Valley.

The report, produced by the Inner West Air Quality Community Reference Group, and released in early September, confirms resident’s concerns that the air in Melbourne’s Inner West, most especially in the Maribyrnong municipality which includes Yarraville and Footscray, has unacceptable levels of airborne pollution which is leading to increased hospitalisations of residents and significant premature death.

‘The report is quite harrowing’ Peter said, ‘particularly as the fear of another petrochemical catastrophe such as residents experienced in West Footscray in 2018, and the Coode Island disaster in the 1990’s already weighs heavily, particularly on the elderly and young families. Our rapidly growing population, increased traffic and activity at the Port of Melbourne, and the new West Gate Tunnel only make this worse.’

Peter has been involved in the Yarraville community for over 25 years, and is concerned that this important report, the result of campaigning and hard work by local community residents and groups, councils and the Department of Environment (DELWP), will not result in the urgent action needed from authorities, unless solutions gain community and government support now.

The report states that not only are pollution levels unacceptable but ‘pollution monitoring in the Inner West is currently insufficient. The EPA operates only three long-term monitoring stations in the Inner West. These aim to represent ambient air pollution, and so are situated away from major roads, which means there is no long-term monitoring where pollution levels are likely to be at their highest. There are six temporary air pollution monitoring stations, commissioned by the West Gate Tunnel project. There is limited monitoring for sulphur dioxide, nitrogen dioxide, carbon monoxide and ozone. No monitoring is done for ultra-fine particulate matter, which is a known risk to human health.’

Peter says that this needs to change, and that the people of the Inner West deserve to know what they are breathing. He is calling for a commitment from government to ‘a community-accessible, real time environmental monitoring system for the Inner west of Melbourne, like the ‘Attentis’ system rolled out last year in the Latrobe Valley. This system (or similar) would allow residents to not only see, for the first time, how bad our air quality in their immediate area is from day to day by looking online, but provide essential data to target important strategies to reduce the threat to local residents’.

He was also critical of the State Government’s u-turn regarding its commitment to filtration of exhaust air coming from the Westgate Tunnel ventilation stack, which will vent into Yarraville. The report states that ‘The West Gate Tunnel will emit concentrated streams of exhaust air through two ventilation stacks, with these emissions contributing to an overall increase in local airshed pollution. The Inquiry and Advisory Committee appointed to advise the Minister for Planning on the West Gate Tunnel proposal recommended that ventilation stack filtration be fitted to reduce air pollution emissions, but the Victorian Government decided filtration will be retrofitted only if monitoring shows that air pollutants reach undefined ‘trigger’ levels. The increased airshed emissions will pose unknown risks for local communities.’

‘Reneging on their initial promise that they would filter our air, only to say that they will now only provide filtration if pollution reaches as yet, undefined ‘trigger levels’ is hugely disappointing, and suggests that the State Government is not at all genuine about the issue of air quality in the Inner West.’ said Peter. He is seeking an ‘iron-clad commitment to installing air pollution filtration on the Westgate Tunnel ventilation stack’, as recommended by the WGT Inquiry and Advisory Committee.

The report is available to the public at environment.vic.gov.au/sustainability/inner-west-air-quality-reference-group