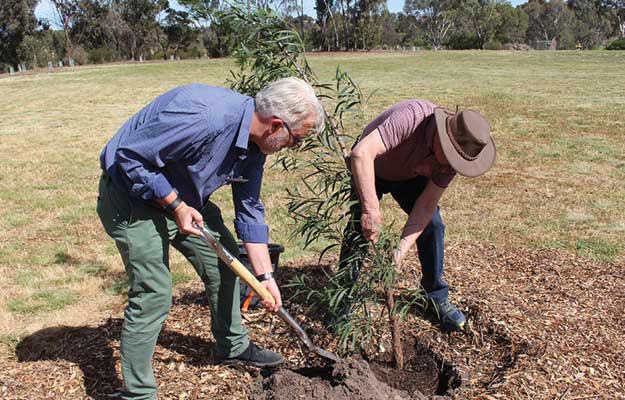 The one millionth tree was planted as part of Greening the West – 1 Million Trees project on Hosken Reserve in Altona on last Friday. Craig Rowley from LeadWest, who planted the tree with Geoff Mitchelmore from Friends of Lower Kororoit Creek, said he was delighted with the outcome for the thousands of residents and businesses that call the western suburbs of Melbourne home. “It’s a legacy to be proud of,” Craig said.

“Many areas in the western suburbs have suffered as a result of minimal vegetation, and this initiative has been addressing that imbalance, delivering positive outcomes,”
Craig added.

The One Million Tree project is an initiative of Greening The West with LeadWest, Port Phillip & Westernport Catchment Management Authority including City West Water, many community groups, local councils and government authorities. These groups delivered multiple tree planting projects across multiple sites including parks, reserves open spaces and key waterways of the west.

It delivers real benefits to the community through increased tree canopy cover for in preparedness for an uncertain climate future and increased temperatures. Increased canopy cover in the long-term provides multiple health benefits including increased shading and urban cooling outcomes.