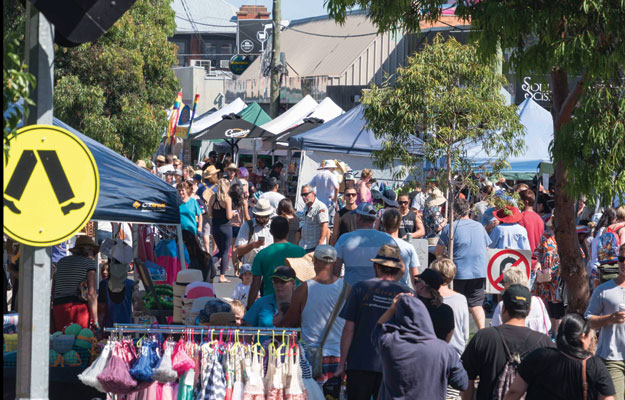 A few years ago it became evident ongoing employment in Adelaide, our home for most of our adult lives, was becoming scarce. Following the end of a major construction project, there was no ‘next big project’ on the horizon for the main income earner in our family.

In our mid-life, we were faced with the choice to stay put and hope a job would soon materialise from a shrinking pool of infrastructure developments, or up-root and relocate interstate, leaving behind our children who were established in their Adelaide lives, older parents and friends. With a job offer in Melbourne, there was little time to weigh the pros and cons, or in my case, fret and fuss over leaving behind my kids and parents.

I’ve always been a little impulsive, considering decisions after they’re made, not before, like more level-headed folk. So, we packed up our stuff and old dog and moved to a rental in Kensington, a suburb we weren’t familiar with but quickly settled into. It proved tough on a family focused chick: monthly visits back ‘home’ became our new norm. We agreed we’d try it for two years.

One daughter and her partner followed to Melbourne a year later, unexpectedly – also for employment, and the other set her roots in Adelaide, determinedly independent but making regular visits to her Melbourne family.

Three years on, we sold our family home of thirty one years in Adelaide and went about house hunting in the scarily expensive Melbourne market. Setting ourselves a sweep from Moonee Ponds through Ascot Vale, Flemington, Kensington and Yarraville; essentially the suburbs we’d found a quality bottle or book shop, brunched, had coffee, a few beers or a cocktail in; it became quickly apparent the real estate market was going to challenge our limited, ex-Adelaide budget.

We were lucky: on a Saturday morning brunch prowl, we came across a small, inner-west suburb we had never heard of and instantly loved the strip shopping, with the bonus of proximity to work and the road out to Adelaide. We were even more fortunate – grateful – to find a financial institution to lend us some money and bought the first house we looked at, just big enough for us to squeeze ourselves into. Not quite an impulse buy, but not the lengthy consideration that should, perhaps, go into a house purchase.

Our Melbourne-based daughter, house sat for us soon after we moved in, and they liked the area so much, relocated across the river to rent here. Now, we’re all Seddonites, previously Belgravia apparently, or old Footscray, depending who you talk to and how long they’ve lived here, which in many cases, seems to have been a long time.

From that first brunch at the fabulous Lola’s on Charles Street, we have slowly but with a steady commitment, worked our way through cafes, takeaways, bottle shops, bars and restaurants along Charles, Victoria and Gamon Streets. So far, we’ve discovered: best coffee stop and there’s many, depends on the day, weather and seating: Tuesdays, for some reason unbeknown to us newbies, is a slow coffee day in Seddon with several cafes closed. Best hash brown, our gauge on a quality brunch offering; The Little Man Cafe does a great herbed croquette version; baked eggs, Lola’s has that one in the bag. We have yet to declare a fave on the ubiquitous smashed avo. Late brunch or lunch on a weekend, if you fancy a decent cocktail, Luxsmith is our go to. Sourdough Bakery for our daily bread, ciabatta or sourdough, and we are big fans of Pompello for the freshest fruit and veg served with generous loads of community goodwill.

We’ve had some solid brunches and lunches in Footscray, Yarraville, Newport and Williamstown, disproving our Adelaide daughter’s cynical view – that we won’t ever venture outside Seddon now we’ve all established our nests here!