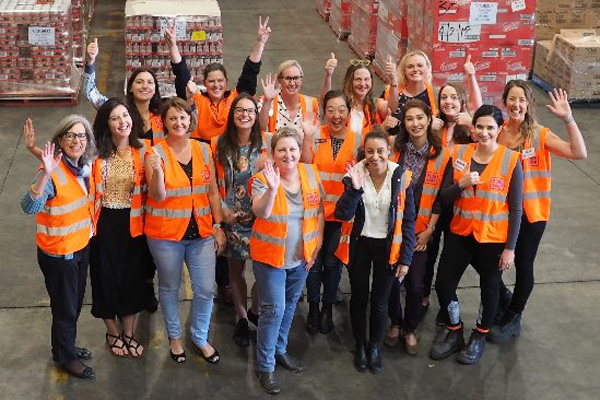 By Lisa Bolin and Kelly Kayne

According to the Food and Agriculture Organisation of the United Nations, roughly one third of the food produced for human consumption every year – approximately 1.3 billion tonnes – gets lost or wasted. Even more outrageous when you read that 795 million people suffer food insecurity. Saving one quarter of that food globally would be enough to feed 870 million hungry people around the world. There really is enough to go around

In Australia, 361 kg of food is wasted per capita every year, yet the people who need access to emergency food services is growing rapidly. This is where Foodbank Victoria comes in.

The not-for-profit organisation, now a part of the national Foodbank organisation, is Victoria’s oldest and largest food relief agency. Started in the 1930s in response to the Great Depression, it has grown and responded to the needs of Victorians during times of difficulty, including bushfires, drought and floods.

CEO David McNamara says, “The classic definition of food insecurity is not having enough money to access the right food, at the right time, for yourself and your family.” He has overseen the distribution of more than 80 million meals in his 6 years in the job.

Tucked away on Somerville Road in Yarraville, Foodbank Victoria’s warehouse space is an enormous hive of activity. Smiling volunteers and friendly staff in high-vis vests are dwarfed by their surroundings. The gigantic custom-made fridges and freezers house perishable goods, and hundreds of shelves are filled with boxes of staples like cereal, pasta, rice and tinned fruit and vegetables. 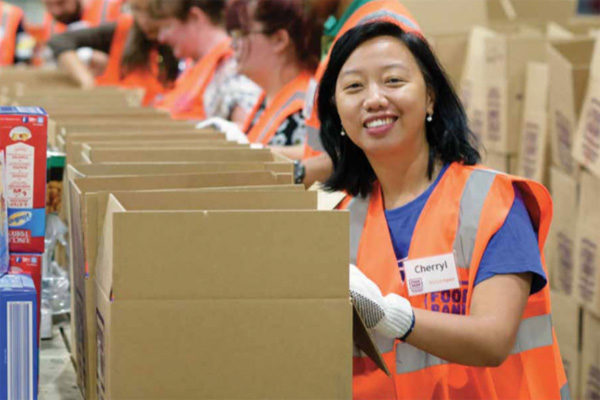 “We work with the whole supply chain from farmers, packing sheds, manufacturers, producers, retailers, importers, exporters; wherever there is food that is still edible but not deemed appropriate for sale, we redirect it to the charity sector for people who need it.”

According to McNamara, the people who need it are not who you might think. The number of ‘working poor’ or underemployed in Australia is growing due to rising living costs, housing affordability, increasing cost of utilities and stagnant wage growth. Food is the one cost that can be controlled on an daily basis, often having a negative impact on people’s health. “Cheap foods are often unhealthy. Having appropriate access to healthy foods is what is important.”

And it’s children who are often the most vulnerable. In thepast 12 months, one in five Australian children have gone to school hungry because their parents can’t afford to buy enough food. Foodbank’s School Breakfast Clubs program is a partnership with the Victorian Government to help address this problem with more than 50,000 breakfasts being served each week.

“Schools look after the most vulnerable people in our community at the most critical time in their life. Our aim is to help these kids grow up and be a healthy part of society, who contribute, learn and absorb as much information as they can.”

Foodbank accept surplus food supplies as well as donations. “We purchase food, manufacture food, get donations as well as rescue food that has date issues, packaging problems and can’t be sold for retail sale.” 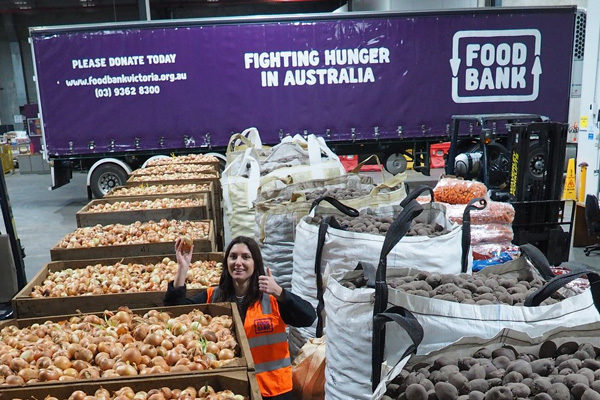 The reality is that one in five bags of shopping will be thrown away. “The commercial sector throws away fresh food because of growing conditions. If it’s a good growing season, you get excess produce, or a ‘flush of the season.’ There are aesthetic reasons because we’ve been trained to only eat food that looks a certain way. In summer, for example, during stone fruit season we might get 20,000kg nectarines turn up because they are too big, or sixty bins of surplus citrus. The farmers don’t want to turn it into the field, so we can take it off their hands. Seventy to eighty percent of food from farmers is donated to us because they want to help.”

Other ways Foodbank works is through the ‘collaborative supply chain,’ turning grain donated by growers into flour through their ‘manufacturing friends.’ Staff donate their time to manufacture and package the food, Foodbank pays for electricity, and products like pasta are the result. “We do the same for pasta sauce, buying all the ingredients at the cheapest possible price and bottling it, so we always have it on the shelves.”

McNamara believes the key points to consider for a successful National Food Waste Strategy are making it easier for food to get to people, getting the right food to the right people at right time, tax concessions for transporting food for donation and incentives for producers and manufacturers to save food (currently it costs the same to dump it as to save it).

Looking to strategies in other countries may also help. France recently legislated to ban food waste from supermarkets, forcing them to donate to charities and food banks. The USA has a subsidy program that guarantees a base price for farmers and food banks can buy the food directly from them.

According to McNamara, there must be a community approach but legislatively it has to be the Federal Government who leads the way “because they can pull all the levers. I see local people coming together and coming up with interesting approaches but the Government needs to lead the way with things like logistics.”

Unfortunately, there has been an increase in food insecurity, with Foodbank growing 15% each year. “We always have a gap and all the indicators are that its not getting any better.” It would seem that for Foodbank Victoria, the families they assist, the food production industry and Australia as whole, it will be important to work together to ensure that there is a circular economy where resources are kept in use for as long as possible, a key point made by the Department of Environment and Energy on food waste.

For McNamara, the growing need for Foodbank services does not get him down, “I meet so many amazing people everyday. I am the custodian of an amazing organisation that helps people who need it most.”

Foodbank Victoria is located at 4/2 Somerville Road, Yarraville. For more information, head to their website:
www.foodbankvictoria.org.au