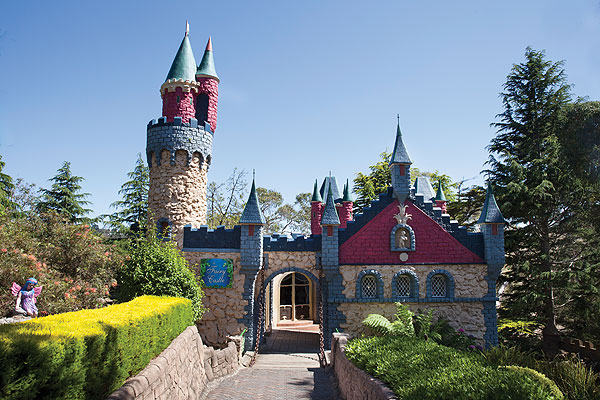 Fairy Park really is a retro boutique experience. A historical institution established over half a century ago, the infrastructure in place would be near impossible to get council approval for in the modern day. An old fashioned dream born of love and pragmatism that has survived off the back of immigrant ingenuity thanks to the Mayer family, German Australians who opened the park in December, 1959.

The overall experience is refreshingly simple. There is an overriding ‘time out of joint’ sensation. The endearing animatronics and fail-safe pleasure of pushing a button doesn’t own your senses.  Unlike the modern theme park “spectacle” coordinated to completely bewitch, at Fairy Park there is room for the individual’s imagination. For children to open their minds to ancient fairy tales and to discuss them with their family, without being dictated to like so many contemporary entertainments.

A slower, organic process of wandering along paths from one fairy tale display to the next as you approach the castle at the summit is not meant to be a rush of hyper and virtual reality. Automated story exhibits, hiding gnomes, manicured garden beds, and multi-coloured toadstools are set into the granite outcrop. And the stonework at Fairy Park is predominantly ancient granite; real, ancient granite.

The glow-in-the dark paint effect inside Aladdin’s Cave may be inadequate for certain tourists expecting Disneyesque details — owner Garry Mayer explained that one criticism in the Visitor’s Log bemoaned the lack of dolphins, presumably live! — but how long are Melbournians prepared to wait in the fuggy summer heat to look at the Myer Christmas windows? Why not head out into the clean air on a decent drive into rural Victoria to a destination, which really is a rare example of a bygone era?

As a society, many lament the loss of traditional entertainment. Fairy Park’s magic is one of unpretentiousness, memory, and the desire for times when enjoyment could be straightforward, but nonetheless enchanting. Visitors are encouraged to bring their lunch and share a picnic. Alcohol can be consumed in picnic areas. There are adequate BBQ facilities available.

And you can also bring your dog! As long as dogs are on a leash they are welcome. So if your pooch is a valid family member then they too can join in on a family trip into the countryside west of Melbourne and wander past Rapunzel’s tower or watch Rumpelstiltskin spin straw into gold. But beware “Devils Leap” Cliff… 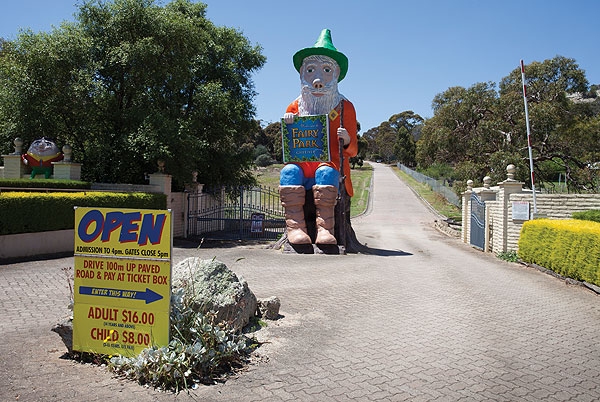 A history of Fairy Park…

It all started way, way back in the 1950s, with Peter Mayer and his son Helmut spending their weekends at home in Geelong constructing garden gnomes, elves and fairies. From these simple pastimes a family dream was born…

As their dream grew, German immigrants Peter and Elisabeth, along with their son Helmut, hoped to find the perfect place to build a Märchenpark. In English, Märchenpark translates into “Fairy tale Park.” Peter found an impressive rocky outcrop in Anakie, one hour west of Melbourne and thirty minutes from Geelong. Peter was able to lease the land from a local farmer who wanted to: “Help put Anakie on the map.”

Weekends were spent clearing the land (by hand) to make way for magical paths leading up to the summit where they built their castle. Meanwhile, back in Geelong, sets of stories and prefabricated homes were being readied to transport to what would be known as Fairy Park. 1959 saw Australia’s first theme park ready to open to the public.

The park has changed quite a lot over time. Animated displays have been integrated, and came all the way to Australia from the oldest toymaker in Europe. The Fairy Castle itself was single-handedly built by Helmut.

Fairy Park is now in its sixth decade. The landscape has matured and compliments the established displays and new works. The Mayer family still own and run the enchanting space of fairy tales and mythology and are dedicated to continue to provide a magical experience for everyone to enjoy. 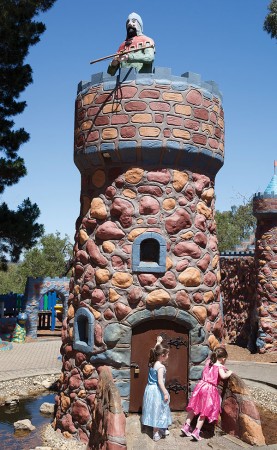 A day trip to Fairy Park

At some point in our lives most of us have been to, or at least heard of, the more popular ‘theme parks’ such as Dreamworld, Luna Park,  and The Royal Melbourne Show. Abroad there is obviously Disneyland. Today I am visiting Fairy Park, west of Melbourne. Now this is where things get a little different…

I was taken to Fairy Park as a child, and that was a long time ago… Approaching Fairy Park today, it almost appears as if some of our most celebrated fairy tale characters have established themselves atop a hill in a compound that isolates them from their more glamorous modern-day rivals, who seem more concerned with selling products than telling stories. Don’t expect roller coasters or performing polar bears, but instead a unique and complex series of exhibits all connected by a twisting and turning path. The overall impression is that the Tin Man himself could jump out of nowhere and any time.

Each of these exhibits has their own theme and a story to tell once you ‘press the button.’ What kid (and big kid) doesn’t like stories or pressing buttons? After your encounters with Jack and the Bean Stalk and the like, there is a special place for the kids called ‘Camelot’s Adventure Playground’ that is packed with rides and obstacles. But look out; locals say that there is a witch who resides in one of the guard towers…

In a nutshell Fairy Park is a great day out for the family. There are ample eating areas, both undercover and outdoor. If you want to pack some salad and have a cook-up, you can use the BBQs for $1.00. And don’t forget to bring your hat, camera and sunscreen, especially this time of the year. 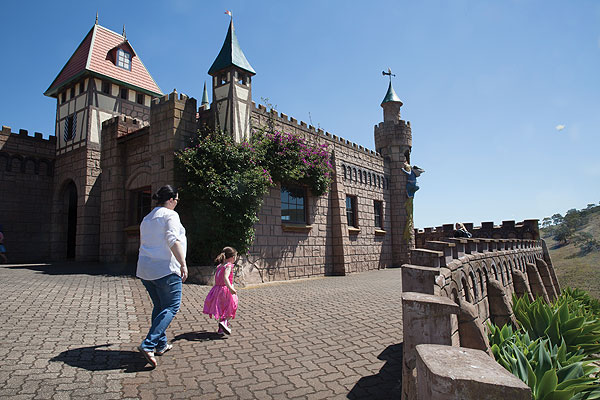