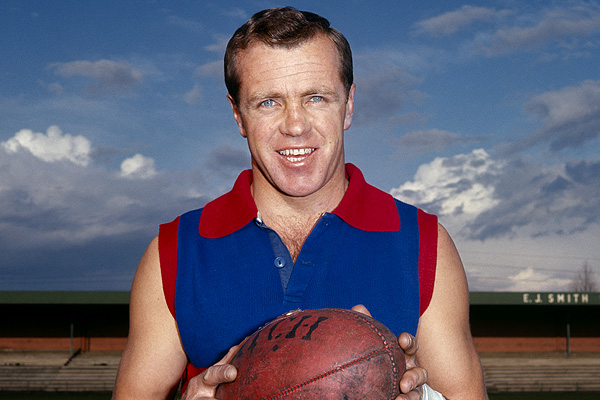 Edward James (E.J.) Whitten gave his all to the game of AFL – he played 321 for Footscray and 29 for Victoria – and as one of Australian football’s living legends in the 25 years which followed his retirement. Not to understate his work off the footy field, it was his achievements as a player which forged Ted’s legend.

After being shunned by Collingwood in 1950 for being too skinny, E.J. was quick to join his local heroes at Footscray. His 1951 debut against Richmond was a game Ted would soon forget – he woke up concussed in hospital after being flattened by Tiger tough man Don ‘Mopsy’ Fraser. His crime? Apart from offering a friendly handshake before the game, EJ marked and goaled not long into the first quarter – unheard of and unspeakably disrespectful in the wild days before trail by video!

EJ took this lesson and proceeded to teach a football masterclass of his own each Saturday throughout the 1950s and 1960s. His reputation was fierce but his ability, skill and determination were second to none.

Despite playing in Footscray’s first premiership win in 1954 as a 21 year-old, success evaded Whitten for much of his playing days. His quick tongue and brusque on-field manner ensured he rarely fared well when the umpires tallied the votes for the coveted Brownlow Medal – equal third and quite a way off the pace in 1959 was his best finish.

EJ liked nothing better than to remind the other states of Victoria’s superiority, a fact he reinforced to opposition in 27 of his 29 interstate games appearances.

Today, he is also revered by modern sports collectable enthusiasts, with many items depicting Ted the footballer fetching high prices. His football card from the rare inaugural Scanlen’s football series (pictured below) can fetch upwards of $1500! 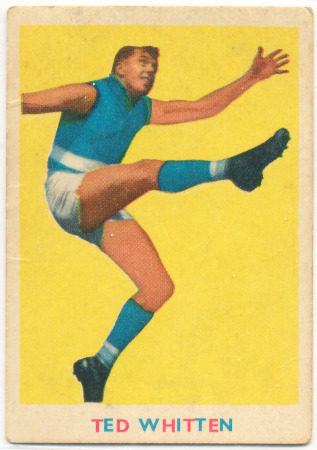