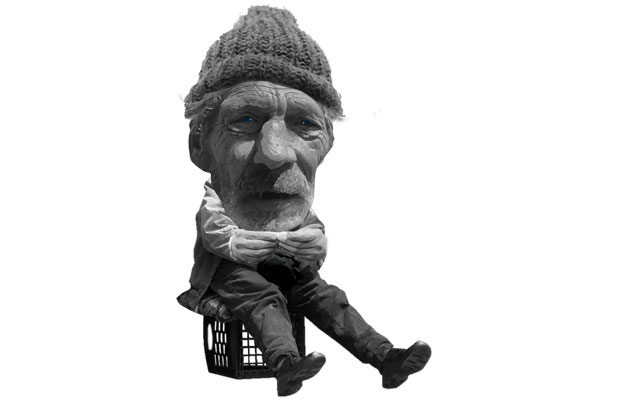 His fingers knot, unknot, then knot again. His skin is 78.9% grime. Yellowed broken nails are storehouses of filth. There are scabs, fresh cuts, grazings, bruises and a mountainous wart on knuckles no strangers to bit of biffo. He wags a thumb stump at me.

‘Lost this trying to prise open a tin of beans.’

Benny’s moth-eaten beanie is pulled onto a brow with topography redolent of a ploughed field. Sun-burned grime. Mats of hair protrude every which way. Long strangers to shampoo, they have become wads more flattened against the left of his skully head and around a folded ear – a reservoir for waxy crud – a clue to the side on which he sleeps.

An opening appears in his scrubby beard and out of his mouthful of oddly straight pearly teeth, his distended tongue lisps this:

‘A scar nobly got is a good livery of honour.’

With that, the irritation I felt when Benny pulled up a milk crate and sat down next to me to watch me draw, vanishes.

He begins to tell me why his speech is distorted and the reason his left arm ‘aint what it used to be’.  He is recovering from his fourth stroke – the one that terminated his 60-smokes-a-day-habit.

‘Probably should have given them away earlier,’ he allows, ‘but I couldn’t figure out how to uncouple them from my soul. I loved them like a mother loves her brats.’

As he speaks his crazy left hand is jabbing at the air as if trying to capture an idea floating by and bring it to earth.

‘Draw me,’ he says, but I’ve already started.

‘Push it,’ he insists, staring over my drawing board, ‘Make me neither  caricature nor chocolate box, for I am anything but.’

He has come to love the streets. Not at first. He was driven here because he could no longer stay indoors. At first the chaos was a bewildering, delirious distraction, antithetical to the white walls that had by degrees edited him down to an empty husk.

‘They began to fill me up again, these streets, but fast, probably too fast,’ now rueful, bemused.

‘On the fourth day of March, 1968, she interrupted my speech to the student common room [I was flying] and called me a “fatuous imp”. She then dissected my flabby argument that the Vietnam war was a ‘police action, a bulwark against the domino-hop of communism’ with such precision I began to weep – not from the embarrassment of humiliation, but from gratitude.

‘I was good at yapping. Really good. In full stride, I was unstoppable. I had read things, seen things, been places. I knew stuff. When I got airborne, man, I was erudite, I was impenetrable and hilarious by turns. On the rare occasion that a interlocutor brought me undone, I would unleash a barrage of sarcasm so vicious that those thinking of rising above the parapet to oppose me would shrink back down. I had learned a kind of all-purpose trick that I could tailor and trot out for any audience, and I was lazy enough to exploit it at any opportunity.

‘Mrs B stopped me in my tracks, emptied me out and ended my career as a mouthy prat.’

As if to underscore this seminal moment in his life, Benny shut up for a moment.

‘From that day on, we were joined at the hip.’

Then, waving his wandy fist at my drawing of him, he said: ‘You’re not getting me. You need more fuel.’

‘Ever been to Rwanda, son? How about South Sudan, Libya, Uganda or Myanmar? Remember the killing fields of Cambodia? Ever been so close [he holds up two fingers, barely apart] to the nut of death that you can actually sense the black hole through which it escapes? Ever stood up to a group of young men drunk on bloodlust, hefting a catastrophe of junkyard weaponry and told them to piss off?

‘Mrs B did, while I continued to staunch the blood flowing from a 14-year-old boy with three bullets in his abdomen because he had the presence of mind to run from these thugs.

‘I go too far,’ hooded eyes, mumbling, noticing the shock on my face. ‘Some fuel burns too hot.’

I put down the 2B and watch him expertly roll a cigarette.

‘I thought you said you’d quit.’

‘I’m rolling, not smoking.’ Quick lick to seal, strands plucked from the ends and he begins to tear this perfect white cylinder into tiny pieces. ‘Therapy.’

‘We were both knee deep in law degrees,’ now brushing tobacco off hopelessly fitting pants, ‘unhappily on her part, lazily on mine. I can’t remember what set us off, but the upshot was that we decided to switch out to medicine.

‘We were two halves of one brain. Me, the sly know-all with dangerous addictive tendencies; she the purest with an ambition to exploit her astonishing work ethic to save the world from itself.

‘I couldn’t resist her.

‘We did the difficult stuff. Overworked rural quacks, undermanned remote medics, sawbones for squalid inner city slums. Then we hit the third world trouble spots – a euphemism for locations where ambitious men [always men] don’t trouble themselves with morality when chasing down power and wealth.’

Benny stopped. He got up, reached into the pocket of what was once an expensive jacket, pulled out a pair of sunglasses, covered his eyes with them and sat down again. If he was trying to hide the fathomless sadness washing his impossibly blue eyes, he was too late. They had already told me that he was in some kind of merciless hell from which there was no escape.

I began to draw again.

‘Yes,’ he murmured, lifting his shades to peer at what I was doing, ‘yes, you’re beginning to get it.’

‘Mrs B was always ludicrously optimistic, positive, practically joyful as we went about saving the world. That’s what pulled me along. Then I began to notice the changes. Miniscule at first – a lost pen, a word lurking just outside of memory, a simple procedure done a million times momentarily forgotten.

‘Then one day I found her near a waterhole well known as an attraction for some unpleasant beasties. She was in a furious red-faced, distended-veined rage. She was staring into the middle distance yelling, “What are you, what the fuck are you?” She didn’t recognise me at first. “You!”, she screamed at my face,”What the fuck is that big thing there?”

‘I brought her home to our nice white apartment with a view of the bay and the day-to-day doings of a busy metropolis. We both knew what was going on, where this journey would end and we wept rivers at the futility of it all.

‘As Mrs B was eroded by this foul disease and replaced with a stranger constantly terrified by all the intruders that I had become, my own grip became less and less sure. I bought an accommodation, another white room with a view of other white rooms and grounds populated by the shuffling lost.

‘When she died, I returned to our apartment and changed into these clothes. I walked out of the door into the street. I never went back.

I was drained. I made the last few marks on the paper and handed it to Benny.

‘Thanks,’ he smiled. ‘I haven’t looked into a mirror since I left home. This will do just fine.’

We stood. He hugged me, gathered the little trolley he had strapped his life to and walked away.