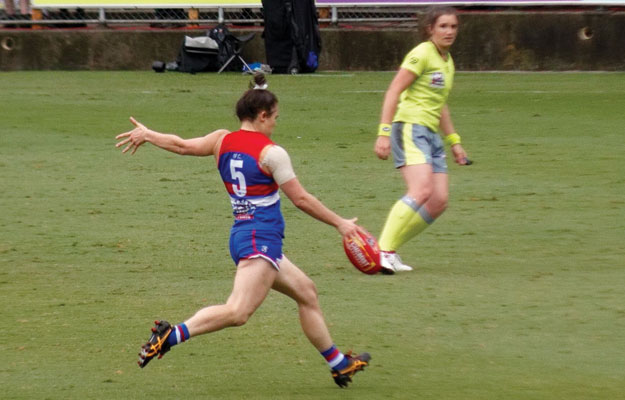 Very soon the women of the Western Bulldogs will enter their third season wearing the red, white and blue. These women were ground breakers along with the Melbourne Demons, proving to all that anyone can play football once and for all.

The first season wasn’t what was all to be hoped for. The loss of captain Katie Brennan early in the season soured things and led to a season with only two wins. But in return they did receive pick 1, 4 and 11 in the draft. Pick one was Isabel Huntington and 4 was Monique Conti who are both exceptional athletes. 2017 was not all loss as the team did show that they can meet the standards of the other teams and many players showed promises of what is to come. Enter the 2018 season, off the back of a season that should have been better but luck was not on their side. But 2018 was a fresh start and really showed that with brilliant display in round one. The 32 point win over the Fremantle Dockers did come with some sacrifice, with the loss of draft pick one Isabel Huntington for the rest of the season. And then in round three again injury concerns of the captain Katie. With the loss of two key players the situation could have been very bleak if the rest of the team collectively were unable to stand up in their place. The women finished their season with a thriller against their old rivals, the Melbourne Demons. The two point win secured their first minor premiership and a place in the grand final against 2017’s runner ups, the Brisbane Lions.

SUCCESS! The women won their first premiership in their short history, and hopefully the first of many more to come. Emma Kearney won the overall best and fairest for the league and Brooke Lochland was leading goal kicker. It sure was a clean sweep for the Bulldogs in 2018.

The successful 2018 campaign will make many hope of continued glory. Pre-season has started early along with the men. Signs are looking promising, but they are not the only ones. The new expansion club North Melbourne is looking extremely dangerous with key signings, and will surely give our women a new challenge to beat. Mid January the first practice match was held in MARS Stadium at Ballarat against the Magpies. A six point win means that the women are again in the right direction. Unfortunately scans revealed that the injury to superstar goal kicker Brooke Lochland is in fact a fractured fibula, but she could possibly return near the end of the season. We just have wait and see what the road ahead will bring for our women.

The Western Bulldogs AFLW team kicks of their season on Saturday February 2nd in Adelaide against the Crows. Their first home game at VU Whitten Oval will be on Friday the 8th February at 7.15pm.