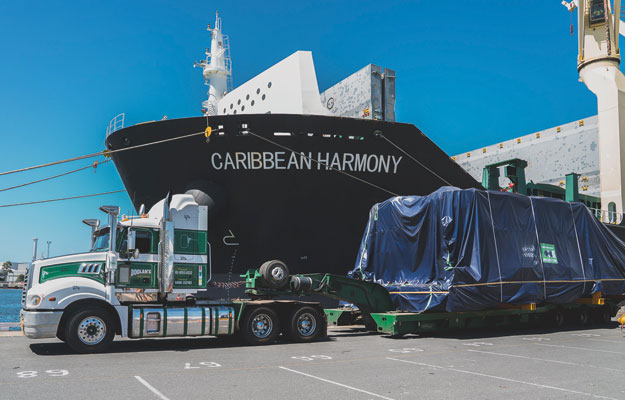 Bella, the first of the two gigantic West Gate Tunnel Project tunnel boring machines (TBMs), has arrived in Melbourne. Named after Bella Guerin, the first woman to graduate from a university in Australia in 1883, the huge machine arrived at the Port of Melbourne in hundreds of pieces in January before being transported to the project’s northern portal worksite in Footscray. It took nearly 100 truckloads to deliver all of Bella’s components and supporting equipment from the port to site.

The heaviest component, weighing in at 307 tonnes and measuring 8.4 metres wide, is the main drive (housing the TBM’s motor). The main drive transport with trucks and trailer was so large that Shepherd Bridge was closed to all other traffic while the delivery travelled over the Maribyrnong River, as the load had to travel across the centre of the bridge.

David Hake, Construction Director Tunnels for the project’s builder, CPB Contractors and John Holland Joint Venture, is responsible for the massive TBMs and said that even when disassembled their components were impressive to see.

“The TBM’s components arrived in all shapes and sizes. The longest delivered was the screw conveyor, coming in at 24 metres, while the tallest was the shield segments at 4.2 metres high,” David said.

“Because of the immense size of some of the components, we had engineers install special sensors, called dynamic strain gauges, on Shepherd Bridge to monitor the delivery. The strain gauges take 50 readings per second and measure the load effects of the deliveries.”

The strain gauges were fitted along the bridge beams and cross frames, underneath where the TBM components were transported. These will remain in place for the delivery of the project’s second TBM later in the year.

David explains TBM Bella is in the process of being assembled at the northern portal in Footscray so tunnelling can begin in a few months’ time.

“Technicians are now reassembling and testing Bella before she is launched mid-year and starts tunnelling her way towards the West Gate Freeway. We’ll repeat this process when the second West Gate Tunnel Project TBM, Vida, arrives in Melbourne,” he said.

Once in the ground, the massive TBMs will travel at around nine metres a day. While the TBM bores through the earth, a mobile facility behind it will install precast concrete segments to line the walls, roof and base of the tunnel.

A powerful machine, the cutter head alone exerts about the same force as 140,000 V8 cars.

Behind the TBM, crews of up to 20 people work to build the road surface and install electrics, ventilation and safety systems.

To learn more about TBMs and tunneling, visit westgatetunnelproject.vic.gov.au.