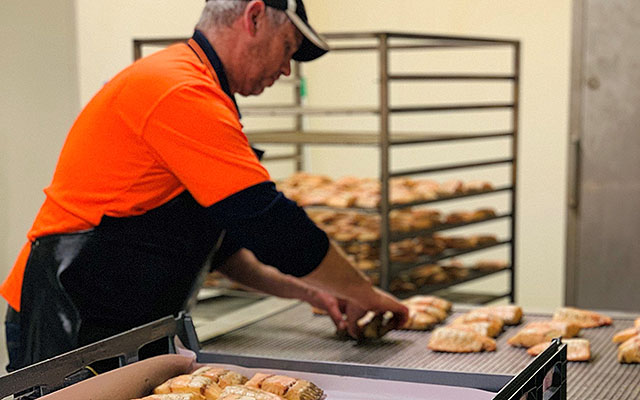 Originally from New Zealand, Jason Smith met his wife Sarah Fenton on a golf course while holidaying in Melbourne. He was smitten and it was only four months later that he decided to up stumps and move to Richmond, Victoria to be with her.

It was more than the love of golf that brought Jason and Sarah together – they are both passionate foodies. Jason had settled into a role working as a sales rep for the building industry in Melbourne when they decided to buy a weekender in St Leonards, Victoria.

The St Leonards property was only meant to be a weekender but both Jason and Sarah fell in love with the beautiful Bellarine area and never moved back to Richmond. The Bellarine region suited this foodie loving pair perfectly as they explored the amazing array of food and winery choices. Little did they know that this move would be the steppingstone towards an amazing business adventure for them both.

Three years ago, Jason and Sarah saw an opportunity and took a giant leap of faith, purchasing the equipment and infrastructure to what is now Bellarine Smokehouse. Jason resigned from his sales job immediately and Sarah joined him nine months later. They kick-started the business by smoking salmon and expanded to include barramundi, king fish, eel and smoked salt. Their background in sales helped to triple the business within 2.5 years. They are now a well-regarded boutique smokehouse, using traditional hand-smoking processes and local Bellarine ti-tree to create delicate and award-winning smoked fish and patés. Jason is the Chief Smoking Officer and Sarah, who pretty much looks after everything else, is the self-titled Fish Boss. 2019 was a highlight year that saw Bellarine Smokehouse win three Australian Food Awards – two silvers and one bronze for their amazing products. Their award-winning smoked salmon pâté is a hot favourite with the Slow Food Melbourne market community.

Jason and Sarah are immensely proud to be part of the Bellarine producers’ community and the quality of the products they produce. They believe in sustainable farming and only use sustainably caught products and premium fish from Victoria, Tasmania, Northern Territory, South Australia and New Zealand. Their motto is ‘premium produce respected with the least intervention’ and no preservatives are ever used. Just salt, smoke and time which results in that simple, pure taste that their customers love.

The business was growing beautifully and then Covid-19 hit. Jason rushed over to New Zealand to see his dying mother… unfortunately he did not make it in time to see her and was then stuck in New Zealand for three months during Melbourne’s mammoth 2020 lockdown. It was a difficult time for the business with Sarah trying to keep the wheels in motion. The only positive from this period is that Jason got to spend two months with family in New Zealand although he had to endure quarantine twice – in Auckland and Sydney!

Goals for the year ahead are to expand their product range, reach into small independent food stores and employ more people in the Bellarine. They wouldn’t mind squeezing in a game or two of golf in if time permits.