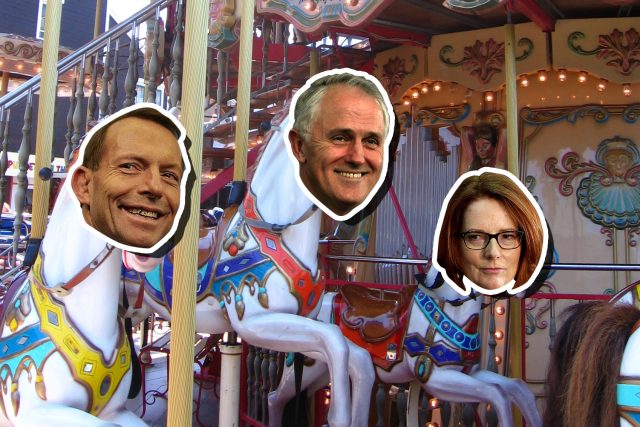 Over the past few years, a phenomenon led by the eastern states has made discarding politicians our new national sport. Since 2010, this side of the country has dispensed with its state and federal leaders (and governments) at a rate triple that of the 25 years prior. Why does this keep happening?  Why change leaders once things get tough? The Westsider asked eight locals; “Should Australian governments be allowed to change their elected leader whilst in power?”

Miguel – So it seems that once the leader is not liked they oust the prime minister and put another party member that is liked so they stay in office and that is wrong as the people should be able to keep the Prime Minister they voted for, not who the government wants. Isn’t that why we vote? Victorians have seen its fourth leader and its third government in five years and far from being satisfied with our leaders we’ve inflicted upon our rotation of national leaders in recent years, there is today credible chatter of removing the current Prime Minister before the next election and now it’s happened.

Athanasia – No I don’t think so. Of course not. The leader was voted in by the people – we voted for that leader to be in. So they shouldn’t be allowed to change the leader. If anything, the leader should be allowed to change the members of his cabinet, but it shouldn’t work the other way around. Otherwise it would be like a circus. It would be a mess.

Nasr – There has been a long unsettled debate for a while about this issue since the Rudd – Gillard incident in the Labor party. I know that many people just do not care who is leading the party they have voted for during the election. For others, it is really an important matter, I think before we decide on that, we’ve got to be aware of the surrounding circumstances, to see the picture from different perspectives. So before we come to which side we stand with, we should consider the answer to some questions like; Is that consistent with the constitution? Does that affect the taxpayers to have additional burden of paying for an additional numbers of retired Prime Ministers? Would that deprive the right of the public to have a higher voice of deciding their chosen Prime Minister? What would be the picture of our nation on the foreign affair level look like for a country who keeps changing their leader for no apparent reason? For all the previous questions, I personally prefer to keep the elected Prime Minister in office for the life of the elected government as long as he is doing his job reasonably.

Ninfa – Big NO but if the leader is failing his obligation maybe it’s time to reconsider changing for a more capable leader who can improve the country.

Qian – I think that the Federal Government should be allowed to change their elected leader whilst in power. Reason 1: It is the internal conflicts in the Liberal Party that the members of the Liberal Party have rights to elect whom is more capable of  leading the Australian people. When the government’s achievement is disappointing, most people and the public opinion polls drop sharply, meanwhile it is time to consider the way the Prime Minister is performing. If there is a brand new face who is able to step out and change the situation, it means that the Liberal Party can win another period to consolidate their power. Reason 2: Australia is a stable, prosperous and democratic country. The more democratic a country is, the more people can accept and bear with it. It does not matter who is in power, as long as he can give us a peaceful environment and abundance.

Dean – I think changing the elected leaders is a good idea as it shows an obvious weakness in those elected who need to be replaced. As they are still staying in power, the Liberals, I think it doesn’t really matter if the elected leader is changed as it shows changes that need to be addressed with the current failing leader. Since the goals and strategies are changing as needed, the changing leader just needs to be changed so as the Federal government can gain strength and momentum as required.

Stan – The Federal government should be allowed to change their elected leader on fair political terms due to their performance in their duties, of outcomes & policies spoken & seen through. How they handled their overall position in governing their policies with their overall performance & not just looking at one of their discrepancies to re-elect someone else without the 2nd opposition overtaking the Prime Ministers role, as we are all humans that make mistakes to keep learning & improvise to become better at what we do -especially with something that someone has started. I believe they can fulfil better before someone else takes on a new role. I believe when a Prime Minister with his or her government in power they need to learn from certain mistakes that are made by the majority of people’s opinions, whether it is a contradiction to a political legislation or something that hasn’t been fulfilled.

Jewel – I don’t support the game of leadership changing system, which actually seems to me nothing but eyewash. Leadership change does not mean government policy change. I think they are just changing the leadership to secure the power. I think parties can change the leader but not elected Prime Ministers. To make it clear I would say party leader and Prime Minister should be considered as separate entities.