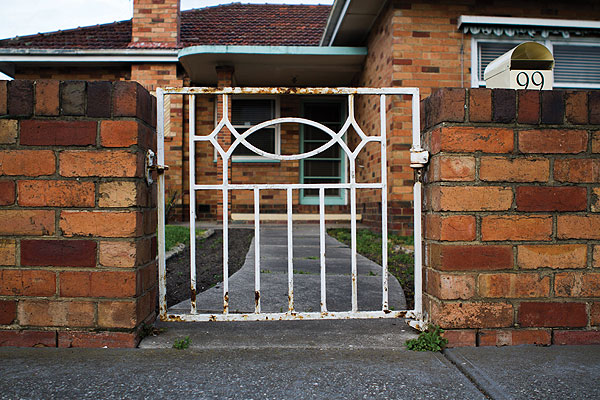 They’ve been labelled the ‘Ugly Duckling’ of Australian architecture, but I am fascinated with post-war cream brick houses of Melbourne.

Moving to Melbourne from country Victoria when I was just 17 I remember thinking how foreign these houses felt. I had grown up in Victorian-esque houses from the 1890s with massive wrap around verandahs, embedded history, creaking boards, fireplaces and ghosts.

The first time I ever stepped into a Cream Brick was to ask my elderly neighbour, who  lived next to my crappy Richmond rental, if I could please have a lemon.

The lemon tree with its painted white stump stood pride of place in the centre of the trimmed lawn, surrounded by a garden edging of yucca-like plants with the leaves braided towards the middle. It was always fully laden when in season. My neighbour gave me a 4 litre ice-cream tub of lemons, as well as fresh rosemary, a jar of sandwich pickles and tomato relish with a red checked fabric top cut with pinking shears. I didn’t understand a word she said, except “too skinny, you eat. Eat.”

Years later I moved to Yarraville and was thrilled to bits seeing two immaculate cream brick houses at the end of my new street, sitting tall and proud like twins in pressed sailor suits.

Both houses had fully formed rose bushes standing strong, vibrant and pruned in the front yards. The driveways were washed every weekend and the footpaths swept within an inch of their lives each morning. The nonnas in each house had so much pride, working hard each day in their floral aprons and knits buttoned to the neckline. I had so much admiration and respect for these beautiful houses and their widowed homemakers.

Then, as life goes on, one of the nonnas passed away and quickly we saw a for sale board go up, then slashed with a SOLD sticker. It sat like this for a while. The neatly trimmed lawn grew weeds and became patchy. The rose petals fell apart and the thorns grew thick. Rubbish blew into the driveway from the footpath and the brick fence started to crack. Some kid tagged the real estate sign, then the letterbox, then the fence. The decorative stone concrete porch started to sink and the house number lost a screw and flipped on its bum. Someone knicked the letterbox. I couldn’t believe how much the house deteriorated in just a few months.

One morning my son and I walked past and a digger was sweeping its bucket right through the front curved corner window, ripping the house guts out and pulling out a wall which had built in laminate shelving still attached to it. On our way back home just an hour later, the house had been demolished, piles of bricks lay across the block. The fully laden lemon tree out the back had been bulldozed and there was a strong smell of citris, but because of all the dust, it smelled like Airwick. Lemons lay across the ground like a war-zone.

But what punched me right in the guts was seeing a ceramic fish with a soft pink and mint green glaze lying amongst the rubble. The fish must have been sitting on the shelves when they were ripped out.

Three three story townhouses will be built on the block, complete with carspaces, artificial grass, hired artwork, and ‘pops’ of colour. They will look pretty and shiny and will sell for over a million dollars. We will have new neighbours to meet and hopefully new kids to play in the street.

There are two cream brick houses remaining on my street. Will they be there in 20 years time? Who knows? While they are still standing I’m going to take advantage of the stunning hospitality of my elderly neighbours and share garden produce and tips on pruning roses while they enjoy watching my son grow and water their gardens wearing just his nappy and gumboots.