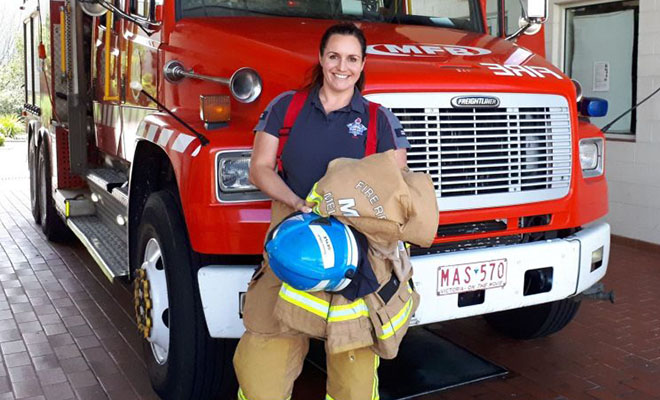 My first job out of school was in a brick and paver company in Taylors Lakes. Growing up, I didn’t want to be in the 9-to-5 office grind and wanted something that’s more than just a job. I remember thinking about being in the police force or with the paramedics but didn’t apply.

As it turns out, I have three uncles from Mum’s side who are all in the MFB. When I was about 17, I did some work experience at Eastern Hills Fire Station. Its Melbourne’s biggest station and I would be involved in Friday displays where the community can visit the station and have a look.

After that, I still didn’t think of firefighting as a career option until I was in my early 20s. I just didn’t think it was a career a female could pursue. However, I wasn’t happy where I was. I know my uncles love the job, and I’ve had chats with them about it. Loving a challenge, I decided to give it a good go and applied for the job. Unfortunately, the fitness component of the job was tough and I failed it. I had to wait for the advertisement again in a year’s time. Every year, there are thousands of applications but only a handful get accepted.

I worked on my fitness before the next recruitment drive. After I failed, I remember making up my mind and telling myself “This is what I want to do.” I trained for the Beep Test to make sure I could get to the level MFB wanted and spent a lot of time researching by visiting my uncles. By the time the next drive came around, I was ready. It was super competitive, but I was finally accepted. There were 36 of us. We spent three months doing a ‘Recruit course.’ There was lots of hot fire training, which involved actual fire and classroom stuff. We were from different backgrounds and industries. There are always a few ex-police and teachers; the MFB take a real variety of people.

I spent my first year at Newport Fire Station. I was living in Altona Meadows then. The general rule is, you move to the CBD after a few years, experiencing different types of work. In the CBD, there are lots of high rise buildings and incidents such as bin fires and office fire alarms from a toaster take up time. In the suburbs when we get called, it’s generally much bigger incidents such a car accident requiring medical response. It’s good to have a mix of both. I have spent eight years in West Melbourne station, one year in Newport and about six years in South Melbourne. I’m currently based in Taylors Lakes Fire Station.

After a long time in the CBD, I got involved in the marine department. I obtained my marine qualification, enabling me to be a marine firefighter. I also completed my HAZMAT course. There are only about 150 of us in Victoria who have both qualifications.

Being a firefighter means you have to be confident in your decisions and forced to make a quick decision as time is critical. You hope everyone trusts each other, is happy and look forward to sitting down and having a meal with each other. You’re basically living with these people in the downtime. It’s important you become close to the people you work with as you need to rely on each other.

My grandpa is Polish and nanna is Russian (Dad’s side). They met on the train journey here after the war and have three kids. Their first home was in Maryston Street in Yarraville. I lived there for about four years and moved out at 22 as I got married. I have four kids. One by birth – Des – from my marriage to my second husband Josh, and three stepkids from his first marriage. My stepkids are with us every second weekend. Josh and I got married five years ago.

The MFB is keen to advertise themselves as an ideal employer for women, and if there are any women within the Inner West who are keen to explore the idea, I am happy to talk to them. It’s important women go up the ranks and have an impact on the organisation on decision-making.

Firefighting is a 30-year career. No one comes in and leaves. In the last 17 years, I can count on one hand the number of people who have left before 30 years. It’s a lifetime career that challenges you, and you never know what you’re going to be doing next.

For the full story of this abridged version, head to humansofsky.com.au. You can catch up on more Human activity via facebook.com/humansofsky and Instagram @humans.of.sky

A human a month
Due to an alignment of the stars and planets – or at the very least the sharing of a common goal to promote the people of the inner west and their pursuits – Humans of SKY is partnering with The Westsider to bring you more stories about…. you!

WESTERN HEALTH COLLECTIVE TIPS AND TOOLS FOR A HEALTHIER LIFE…

A CONVERSATION WITH KATIE HALL MP