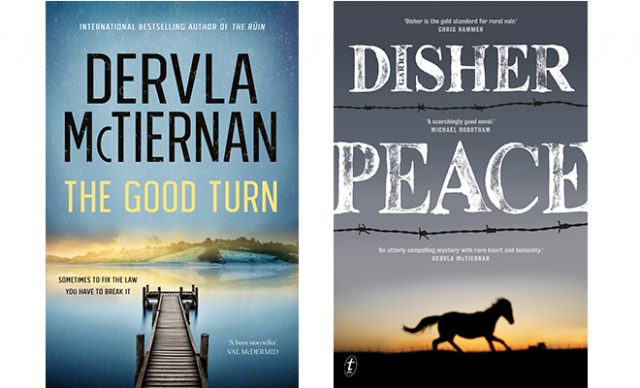 Sherryl Clark is a writer, editor and writing teacher. Her recent crime novel Trust Me, I’m Dead, was shortlisted for the 2018 CWA Debut Dagger. The sequel, Dead and Gone, will be published in June 2020.

Ireland seems to be a favourite setting for crime writers lately, and McTiernan’s novels are a great example of this. The Good Turn features Galway and the village of Roundstone, and inspired me to look them up to gain a further sense of the locale.

Cormac Reilly features again in this novel, but shares the stage with Peter Fisher, a keen detective who has been working with Reilly and taken on much of his “never give up” attitude, as well as a big dose of independent action.

This leads him into disaster when he believes he’s found the man who abducted a schoolgirl and follows him to a deserted boathouse at a lake. The pursuit ends in disaster, and Fisher is sent off to work for his father in the village of Roundstone, supposedly to keep him out of trouble while he waits for a police review and punishment. The fact that under police guidelines, fathers and sons shouldn’t work together is a sign of the internal politics and underhand dealings going on with the Irish garda – who owes who a favour? And how far do those kinds of “favours” stretch? Into full police corruption?

In Roundstone, Fisher can’t keep his nose out of what seems to be a cut-and-dried investigation he’s allocated to tidying up. Back in Galway, Reilly isn’t faring any better with those higher up determined to find a way to get rid of him. His attempts to uncover corruption lead him deeper into the bog.

This was definitely a book I couldn’t put down – the kind that you read in every spare minute and then are disappointed when it finishes because you wanted more. But there is more than enough in The Good Turn to keep any crime reader enthralled. Family hatred, corruption at such a level that there seems no way to stop it, detectives who plough on despite setbacks and threats. One of my top reads in the past six months – highly recommended.

Garry Disher is a master of setting and detail in his novels, and never more so when they are set in South Australia where he grew up (although his Mornington Peninsula Challis novels are great in this respect, too). I had read the book before this one, Bitter Wash Road, but didn’t need to remember it as this novel deftly sets us moving into Constable Paul Hirschhausen’s life as an outback town cop without any delays. Tiverton is the kind of town you probably wouldn’t choose to move to, being small, insular and damn hot most of the year, so the locals tend to be people who’ve been there for generations.

It’s almost Christmas and there’s the usual run of small crime – two boys stealing a ute and Brenda Flann driving her car into the front bar of the pub. Then he’s called to a bizarrely gruesome incident with some miniature ponies, and asked to check on a family living on an isolated property, and it all goes south from there. Hirsch isn’t the kind of cop who believes in coincidences, and he’s come to care about this community, but can he save it?

The variety of characters is what makes this novel stand out for me. From the down-and-outs with deep life struggles going on behind their worn-out walls to those for whom a small town gives them a prime opportunity to be a powermonger, Disher makes each one shine in their own way. He also nudges us constantly to remember that surface impressions are only the beginning; thus our policeman Hirsch must use every skill and talent he has to get behind the walls and facades and work out what’s really going on. This is Disher at his best.

ALL OF US TOGETHER