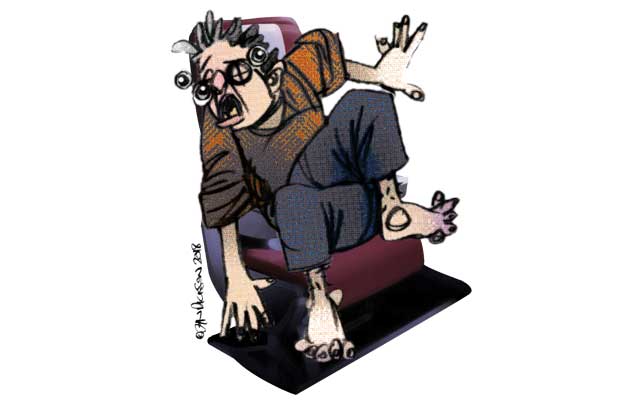 Mandible woke. His head had become a biscuit tin with two cookie-sized stainless steel ball bearings clanging its clattery walls every time he moved. Judicious ministrations of caffeine and codeine regained its quiet. But the price of mufflement was the knowledge of the night before.

Grace ‘Nightwatch’ Willocks, the Department of Interstitial Indices’ nocturnal genius had joined him for a farewell drink at the Preston Motor Inn [her choice] and nine libations in, things had started to come unglued.

Nightwatch had taken a position on feminism that revealed her as a traitor to her gender and Mandible had saddled up the challenge of reconstructing her. Almost at the end of his closing argument, he dared to deploy the old Mao aphorism that ‘women hold up half the sky’. It was that seemingly benign offering that encouraged Nightwatch to unchain her rebuttal. She poured the contents of her brandy balloon [‘a triple, thanks’] over Mandible’s head and began to spark her zippo lighter. With menace.

The bartender soaked her down with a small fire extinguisher he kept within arm’s reach for that very purpose.

Mandible saw Nightwatch’s modest silhouette wrestle the cracked glass door to the car park, taking with it the once distant, but now impossible, chance of some kind of ongoing encounter. His slippery reptilian brain lied to him and suggested that the only way to make amends was to shout the bar. And then do it again.

The rising sun showed that his considerable severance emolument had taken a substantial hit.

His phone pinged. It was Jan. Apparently there were details of their former life together that were in the hands of local shysters, Our Hands – Your Pockets & Partners, that needed immediate resolution at Mandible’s expense. Then his mother rang to deliver the weekly Parent’s Lament. The ball bearings began to roll again.

Clearly, it was time to leave town.

‘Don’t joke at airports. Terrorists, bombs and drugs are not funny. I know this because Colonel Fatuous of Australian Border Force Inc took me into a small windowless room to explain it to me. And have a general [gloved] poke about my person. Which is not funny either. So don’t giggle. It only encourages them.

All I said was that the bomb-like metal container in my suitcase was merely a drink bottle emptied of stimulants. Don’t say that. It makes deep-navy uniforms twitchy.

Next to me, down the back, two seats from a dunny, sat Finella [‘call me Fee’] who was taking her first journey OS. Recently divorced, Fee was ‘open to new experiences’. Frankly, I had experience enough and was just waiting to see what the four glasses of red would do to the 20mg of Temazepam I had just scoffed.

Quite a bit as it turned out.

Mid-sentence I morphed from an articulate, world-weary, man-about-town into Rubber Boy using a language that neatly clipped the tops and bottoms off the 26 letters available to me.

‘Cuzboodshed,’ I told Fee, as my chin sank into my chest, my eyes roamed independently of each other and drool moistened my chin. ‘I’s pezzajutz!’

Pezzajutz I may have been, but this did not silence eager Fee who was going to make the most of her journey by sharing her every insight. Well, good luck Fee, I’ve just passed Gammalamma 6 and I’m still outward bound.

I surfaced thirteen hours later as the flight attendant leaned across to urge me to put my seat in the upright position. Fee was attending to a thought she had regarding the attitude of privileged [read ‘white’] countries and their reluctance to accept refugees, EX407 was on its descent into DXB and I was blind as a bat.

My shrieks failed to bump Fee from her unerring trajectory into population politics, but had the desired affect of attracting the attention of the flight attendant who then removed the mask from my face and instantly restored my sight.

Fee followed me into Dubai International Airport leashed to me by her continuous commentary on my manners as a sleeper. Deeply snorey and slightly handsy. Suffice it to say, I could have behaved better.

She also hoped that I wouldn’t mind if she tagged along while we endured the two-hour wait for our connecting flight to MAD, as she had heard some unsavoury stories about middle eastern airports and was fearful that she might be abducted.

Dubai is rich – its gateway a plush reinforcement of her glittering prizes, with a side homage to excess. Fee became quite dizzy with the displays of extravagance and the ready availability of The Brands more commonly found on the Champs-Elysees in Paris, or Rome’s Via Condotti. She couldn’t afford them there either.

Then she began to notice the surfeit of local men in white robes and the concomitant dearth of local women and drew closer to my side. No amount of persuasive explanation of cultural proclivities would allay her suspicions.

When she began to share her observations with a sympathetic British couple, I bought a packet of cigarettes and three miniatures of brandy and retreated to the smoking room where I revisited the habit I had abandoned ten years ago. I loved it.

An hour later, I joined the boarding queue for EK141 and an antsy Fee who had limpeted herself to the Brits in my absence. Her fear that I had been spirited away evaporated when she spotted me. It was then seamlessly replaced with a kind of nose-turned-up repugnance when she got within sniffing distance and realised what I had been up to.

‘You’re an ashtray,’ she spat, her head angled away, her body still close in a manner that seemed to say that the latter forgave me but the former was awaiting the return of the jury.

We suffered the meet and greet of the ever-solicitous flight attendants and found our way to the same seats we had occupied on the flight in. Fee, next to me, had clearly decided to use the eight hour hop to MAD to share with me some of the inherent dangers of smoking tobacco that I might not be familiar with. Her tortured insight that our conversation might become a kind of live Tinder was accompanied by gales of red-faced breathy laughter. But it was her introductory sentence though, ‘Are you aware that smoking stunts your growth?’ that forced me to palm a couple more tim-tams and farewell them into battle with my nervous system washed down by the customary draughts of average red wine.

‘Glubbagshot!’ I yelled at Fee’s perplexed face as the darkness fell and the freakshow of my subconscious came out to play.

I re-emerged at the insistent rib-poking of a slender hand holding a golden ballpoint pen. Eight eyes shared between three flight attendants and one brave member of Spain’s Policia Nacional lasered through me as the clearly irked holder of the pen insisted I leave the aircraft. EK141 was empty, save for my concerned posse and, further down the aisle, a mumsy cleaner who offered me the ubiquitous Spanish greeting, ‘Hola,’ she grinned, ‘Buenos dias.’

‘Shadbaddastack,’ I beamed, gathering my worldlys and lurching towards the light.’