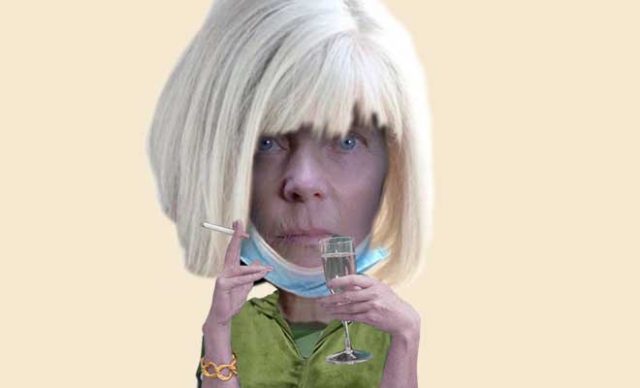 Bestie Crumpetleaf and I have surrendered the family home to its fate. The Manor, as it became known, served us well. But the rot and rust and feeble bones caught up with it and bits began to fall off. Big bits. We have emptied the house of children and are now setting about replacing it with a contemporary, future-proofed, money sink. So far, it’s working well.

As we wait, we have poured our considerable possessions into a miniature impersonation of a house two suburbs away from The Manor. The New Suburb is populated with similar dwellings to the one we have shoe-horned our life into, and they are occupied by, how shall I put this: ‘elders’.

They are so friendly that I have taken to scouting the street from the front window before making a run for the letterbox. If spotted, I may find myself cornered as Next-Door-Barry shares his encyclopedic knowledge of the relative merits of long-handled pruning shears over standard-issue secateurs. Next-Door-Barry has a way of circling his quarry to prevent its [my] escape, while he gurns and spits headache-inducing detail about stuff I have no knowledge of for the simple reason that I couldn’t care less.

To truncate this twaddle, I now set an alarm on my phone which interrupts any unwanted jawing five minutes in, allowing me to excuse myself to attend to this important ‘call’.

There are other stories. I have made some notes. These are they:

Tonight, the doorbell rang as we were preparing dinner. I opened it on to a woman wearing a surgical mask as a chin hammock. She seemed comfortable with the goblet of white wine in her left hand and a burning durry in her right. She took a large drag from her exquisitely rolled dooz and, when the coughing subsided, announced, ‘I’ve got your cat!’.

‘No,’ I replied as a wreath of smoke dried my sinuses, ‘we don’t have a cat.’

‘That’s because I’ve got it,’ she replied, not missing a beat, ‘and the bloody thing just cost me a grand at the vet!’

Whoa, thought I, is this some kind of clumsy shakedown? Not a bit of it. As I later learned, this was Chardy Mary, long-time occupant of a solid tidy dwelling four doors up on the right and serial neighbourhood visitor. She went on:

‘Sorry, not your bloody cat, your mother’s bloody cat,’ she said, randomly durry-stabbing at my chest while her eyes chased each other in their sockets.

No, not my mother’s cat. I can almost hear dear old mum sniggering from the grave she has occupied these past ten years. ‘Find your way out of this one, smartarse,’ I hear her say.

It was Bestie and her empathetic worldview that allowed me to escape this curious exchange. She had joined us at the door, aproned and carrying a freshly filled vat of chardy herself. It was a meeting of like-minded souls who immediately tucked into a yack fest that roamed far and wide and equipped Bestie with an overview of The Street that revealed a kind of dark-side Neighbours.

Apparently, our ‘joint’ is an architectural marvel built to the highest standards and the best materials available to a couple who had abandoned the brothel they owned in a seaside suburb after it was closed by police for ‘behaviours contrary to the community’s interest’. Three months after they moved in, they disappeared and this perfect replica of a house was stupid-price-sold to a retired shrink who lived here with seven cats. Ah, the cat…

Beryl at number eight likes a séance from time-to-time, but not since February last when seven naked people ran from her house, clambered into a small van and sped off into the night, pale faces pressed against darkened windows.

Nobody knows what Willy Fretwell is up to at number 17. He is rarely seen but makes his presence felt with a series of curious noises that escape his faux log cabin, usually late at night. Chardy Mary’s mate Colleen [number 15] says it sounds like an angle grinder. Probably a Makita 720w 125mm, if she’s not mistaken, drawing on her considerable experience as Head of Tools at Bunnings before her ignominious departure two years ago after the incident in the storeroom.

There’s more, but it’s bedtime and tomorrow I have work to do.

It used to be called a ‘tip’. Going to the tip with stuff meant coming home from the tip with stuff. As much as the old man wouldn’t notice had been stashed in the boot. It was a free-range free-for-all. The only entry fee was an ability to ignore the smell. It was the smell of dead sock hell. Got my boy racer bike there. In instalments: one week a frame, next week a wheel, then another. One Tuesday, I purloined a set of handle bars that I straightened by plugging one end with a candle, filling them with sand through the other, candle-plugging that end, then jamming them into the metal bars of a storm water drain and getting Freck Moore to help me pull them straight. The sand stopped the hollow tube from kinking. But I digress.

Anyone who has emptied a house of contents accumulated over decades knows that the tip has become a ‘waste transfer station and recycling centre’. These are one-way sanitised user-sorting libraries of stuff that have reached the end of a useful life. Or a trend. Or a fashion. Or a whim. All sorted and filed by the depositors (customers) whilst the flock of high-vis clad Transfer Monitors maintain a keen watch for any lazy category drift from a clutch of recycled lounge furniture high atop a central plinth.

Everything that’s comes off the back of the trailer that I borrowed from Andy Flock just before Xmas attracts a fee. And nothing goes back on. The elite squad of Transfer Monitors see to that.

Over the summer, I have spent a match head under $2k at our waste transfer station and recycling centre. They know me now. They seem to enjoy denying me any relief from the usurious and often random fees they conjure while circling my latest load as they direct me to where various categories of stuff should be unloaded. By me.

The Manor was demolished on Thursday. We had lived there long enough to grow two children into reasonably competent adults. But it’s gone and good bloody riddance. Acme Total Demolition did the job.  On Monday, Franco Guzzi, ATD’s Lead Demolition Executive, sent me a photograph of a pile of old tyres. These, he revealed, had been buried behind our former four-car garage – a grandiose name for an aluminium shod shed with a roller door that never rolled, and cladding so poorly installed that any whiff of wind stirred a cacophonous orchestra that continually invited shrill threats of law suits from sleep-deprived neighbours. This moaning ceased after we tied the offending flaps down with 100mph tape, string and old wire coat hangers. The former owners of our house had earned their living from ‘repurposing’ American sports cars. These tyres were their belated gift.

Franco Guzzi’s offer to dispose of this tyre pyre for the onetime price of $40 per tyre seemed excessive. There were 36 tyres. My friends at the waste transfer station and recycling centre said they would take them for $9 each. If I cleaned the ancient clays out of their insides, they would show me where to stack them, neatly.

Yesterday it was hot. Andy Flock’s trailer kicked up a lot of dust as I expertly backed it across the now barren tundra that once supported The Manor. The tyres had been neatly piled precisely where the sun was at its fiercest. Each one contained at least one cubit of ancient clays that could only be removed with surgical sledgehammery.

When Bestie found me two hours later, I was dehydrated, delirious and hallucinating. I insisted she leave my estate forthwith or I would unleash the hounds. She soaked me down with the neighbour’s hose. Then she shifted the trailer into the shade and completed the task that had brought me undone. She watched forlornly as I tied the tyres to the trailer with ropes various that I had brought for that purpose. She kicked the load. 18 tyres flumped to the ground.

‘Best that happened here,’ she said forcing my fingers to grip the bottle of cold water she shoved at me while she skilfully reloaded the trailer, tossed a tarp over it and expertly tied it down.

‘There,’ she said, deftly load-testing her trucker’s hitches, ‘that lot should now make the journey safely.’

It did. I have now spent just south of $2.5k at the tip and I’ve got nothing to show for it.

I worry about Christopher. I only know his name because it is scrawled on a piece of cardboard he holds above an empty cap that he sits beside outside Barney’s ‘Compleat’ Market and Emporium. Not the truncated matey Greco-Australianised ‘Christo’ or even the warmly asexual ‘Chris’. No, Christopher gave us all three syllables. Just like his mum would have wanted.

There are other words around his name. ‘Homeless’ is one. ‘Hungry’ is another. ‘Lonely’ breaks my heart.

I have no cash. Who has cash? I doubt Christopher has a PDQ scanner for my credit card.

I go masked into Barney’s. I buy this and that. Important things. An avocado, some Danish feta, a potato and rosemary loaf. I buy some crisp Yarra Valley grapes and two bottles of kefir. I ask for single source coffee beans, but they have none.

All the time, Christopher, with his hat and his sign, is squatting inside my head. I can’t bear it. I self-serve, pack my purchases into the recycled bag I brought with me and EFTPOS an extra lobster. In cash. For Christopher. I leave.

But Christopher has moved on.