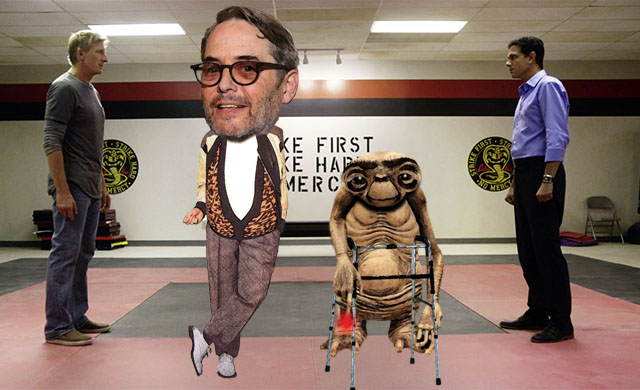 So, what does a travel writer who’s stuck at home watching TV write about? You guessed it – TV! Now my first question is “What has Netflix Cobra Kai taught us?” Strike first and strike hard? That being punched in the face isn’t really that bad? Or that any script can make you look totally bad-ass?

Not quite. It’s taught us is that all it takes is a couple of passionate fans, imagination, willing participants, and voila – any bad (or at least iconic) ‘80s movie can be rehashed into a fun, nostalgic schlock-fest, guaranteed to put to bed those “which shows should we binge next” questions that seem synonymous with 2020. Then I got thinking (uh-oh); if this treatment were to be given to some other fan favourites, what might they look like?

Naturally the first movie that comes to mind when going back to the future is, er, well Back to the Future. But we already know what happened to Marty McFly, Doc Brown and the rest of the gang as this was covered in two quite detailed alternate timelines throughout the first sequel; Back to the Future II, so there’s really nothing left in that horse to flog. Beyond that, most films that were even moderately successful – The Karate Kid included – spawned multiple sequels which ranged from watchable, to what Spinal Tap might have described as “filling a much needed void”.

Adding to the congestion are several imminent big-screen resurrections, such as Bill and Ted Face the Music, Top Gun: Maverick, and possibly even a Beetlejuice 2 release. Then there’s the real life dramas spawned from films like St Elmo’s Fire, The Breakfast Club and pretty much any film starring someone named Corey, in which the stars just carried on living out the personas of their flawed characters, reminding us that even though a 17 year old kid with a cocaine habit being sent to rehab passes for cool, a 40 year old doing the same does not.

So after taking in all that and slipping on my Ray Bans, here’s what I came up with. Get ready for Season One of…

The biggest grossing movie of the 1980s ends neatly with the adorable little guy heading off to be with his unseen alien buddies. But it turns out that E.T. hitched a ride with the wrong crew. Yes he may have phoned home, but it ended up being a wrong number. Almost 40 earth years unfold as he bounces from planet to star, until one day his travels led him back to Earth – the place it all began. His ten year old human friend Elliot (Henry Thomas) is now in his late 40’s, and has spent much of his life in therapy – continuously imploring friends and family to believe that he has an Extra Terrestrial friend was not a great career move in hindsight. He does still have a staunch ally in his sister Gertie (Drew Barrymore) but with sophisticated tracking equipment and intel, keeping E.T. away from the Federal authorities (who want to dissect him) and a Ukrainian arms dealer (who wants to weaponise him) is going to be even harder than it was the first time around.

Ferris Bueller Gets Out

I don’t think this exercise could be taken seriously if we didn’t take on a John Hughes movie. Set in the 1999 lead up to Y2K, the now 30- something Ferris, freshly released from prison (yes he eventually tested his powers of shenanigans against the wrong authority figure) is on the prowl for millennium-bug inspired riches. Ed Rooney (Jeffrey Jones) returns as a washed-up ex-principal turned parole officer to inject some humour. Adult-version scams are Ferris’s deal, and with his old pal Cameron (now a corporate lawyer with plenty to lose) reluctantly in tow, Ferris will try his hand at anything. Set to a backdrop of boy bands, flannel shirts, and Frappuccinos, let’s hope Bueller doesn’t bite off more than he can chew, again.

As you wish – The Princess Bride Chronicals

Fred Savage returns to this fairy tale classic as the unnamed grandson (let’s just call him Jack), dealing with the recent passing of his grandfather (originally played by the late Peter Falk). He is now a father himself, living a quiet life in the suburbs, and while clearing out his grandfather’s meagre belongings, is surprised to find a book; “The Princess Bride”. Memories of being cared for during his brief sickness as a young boy come flooding back, and he tucks the book under his arm, intending to read it to his pre-teen daughter. Things, however, don’t go to plan, as she rejects the idea of her father reading to her, and enters a rebellious phase of her life with potentially dangerous consequences. Finding himself resisting his daughter’s will, and suddenly battling a series of flow-on events – an older boyfriend and his gang, a corporate take-over at work, and competition for his wife’s attention, Jack enlists the help of an enigmatic but mysterious old college friend, played of course by Cary Elwes. This could go anywhere…

And there you have it folks. Will these TV sequels ever happen? I guess it just depends on who’s reading…