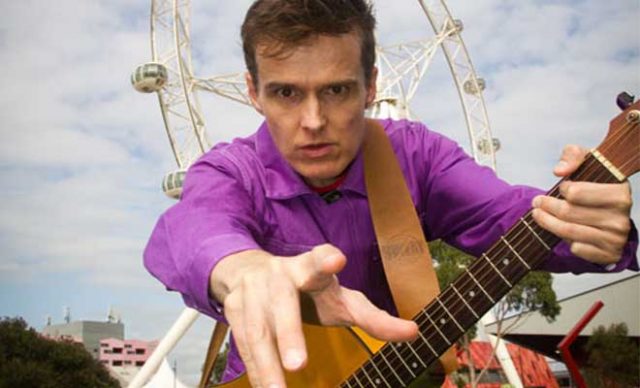 In the lead up to his Melbourne Comedy Festival show EVERYONE ELSE IS WRONG, The Westsider caught up with Andrew Hansen to talk about his show, the importance of comedy and the benefits of living in the west.

How long have you lived in the west?

I moved to the west in 2018. Don’t mention that I came from Sydney. There seems to be a type of person who objects strenuously to anyone from Sydney. This was news to me in 2008 when I first came here and met my wife. So shhh.

As a child, I loved creating complex Lego replicas of suburban houses from the war eras. It was only after moving to the west, and discovering my Great Uncle Anders Hansen was responsible for building hundreds of homes in the Kingsville area during this period, that I finally understood my passion.*

My current home is a proud Hansen original.** It’s very wonky. Our shower floor is not horizontal. Although people tell me it’s not the house. It’s the soil. I wouldn’t have moved here if I’d known that. And look, I’m amazed that the agents didn’t mention it. Wouldn’t you think that would be the first thing they’d say?

Your show is called Everybody Else is Wrong. Is there a caveat that people in the west are less wrong?

Well that’s true. But we don’t want this to get out. I think it is pretty important that we keep quiet about all the great people and places here. We don’t want everybody, particularly those awful Sydney people, coming here and pushing up the house prices.

For some reason people are strange when it comes to housing markets. They seem very optimistic, but if they were more like me and realised they were all wrong, the houses would sell for $100. We’re only a few years away from revolution – guillotine by bread slicing machines.

Is this your first solo show?

Well no. I did a show in 2020 that I called the solo show. I had such a great time and was amazed to find that the audience actually liked it. So that gave me the motivation to do another. This one debuted at the Adelaide Fringe in one of those funny portable wooden theatres where you can hear audience sounds from three other shows. It makes it really interesting. Of course, it was my poor neighbours I was thinking of – struggling to make jokes through the noise levels my audience were delivering.

On social media, you called your current hairstyle a mullet. During the TV series, The Chasers War on Everything, you were known to rock a wide variety of crazy styles. Are you going to have to employ wigs?

I wouldn’t stoop to a wig. All my stunt work is done by my actual hair. The mullet is a result of living close to Whitten Oval and trying to fit in. Although, disappointingly, my hair just doesn’t grow long enough at the back for a ponytail, so I may have to resort to hair extensions.

You are famous for The Eulogy song, which attracted the ire of many, including John Howard, for pointing out that dodgy people suddenly become ‘good blokes’ after they die. Will one of our ultimate ‘good blokes’, Shane Warne, be featuring in updated lyrics?

Well the hot tip is yes. He has to – at the risk of putting Shane Warne back into the media for the 49th day in a row.

Will your show include much political satire?

I’ve given up on political satire myself. The real process has become so farcical. There’ll be a couple of jokes but not so much that it’ll make people feel bored and depressed. The show is more about solving the world’s problems like house prices and alternative milks, using only a piano, a guitar, and an unshakeable conviction that everyone’s going about things the wrong way.

What role does comedy play when dealing with difficult situations like COVID?

I think comedy is hugely important, but only in taking people’s minds off the crisis. History shows that entertainment tends to become lighter during difficult times. This show doesn’t delve much into depressing subjects. A song about climate change, for example, deals with the positive changes people are making. The housing crisis is addressed through the perspective of characters in Sesame Street.

Your upcoming ABC musical history series Stories from Oz includes an episode titled Melbourne’s Cursed Ferris Wheel. I think there will be a lot of local interest in that episode. What can you tell me about it?

Oh yes. The poor dear wheel. I was heartbroken about it because Chris (Taylor) and I wrote an entire musical about the Wheel and it was a story of triumph over adversity. Then they shut it down and we had to quickly change the show. So it’s a very emotional story for me.

Apart from your Melbourne Comedy festival show, and the TV series, you seem to have a huge number of projects on the go including a series of children’s books written in collaboration with your wife, Jessica Roberts, about Bab Sharkey and the Animal Mummies.  How do you keep projects from seeping into each other?

It’s very confusing to be honest. I’m usually working on about 30 things at once but only three of them end up happening. But when I focus on one story, the others just disappear out of my head. Since I’ve had children, my short-term memory has gone, so that’s very helpful. The scariest one is when Jess and I do Animal Mummies presentations to kids. I am terrified I will lapse into my natural self and say something rude or offensive to an audience of 7 or 8 year olds.

*This is a figment of the author’s imagination. Andrew is not related to Anders Mauritz Hansen. In fact, he preferred building Lego castles and has yet to appear in an episode of Who Do You Think You Are? to discover his great great great grandfather was castle builder to the Danish star Hamlet. 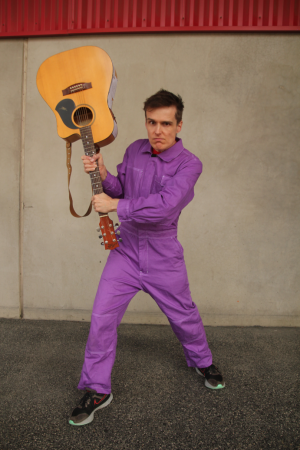 EVERYONE ELSE IS WRONG – AUSTRALIAN TOUR 2022

A sizzling new slate of music and sketches about how things ought to be done. Because just like you, Andrew Hansen knows EVERYONE ELSE IS WRONG.