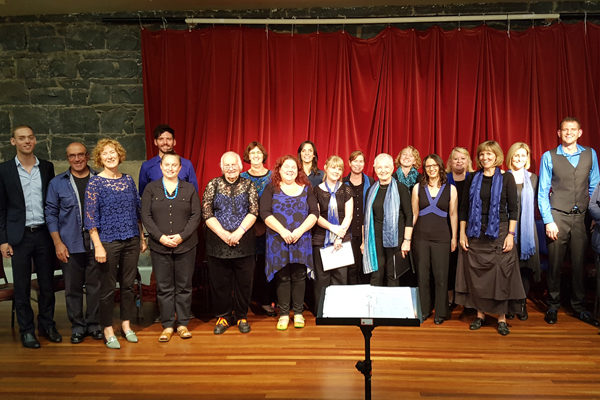 By Ben Leske and Chris Nankervis

The idea was hatched one sunny day at a Christmas street party in Footscray in 2015: a shiny new choir for Melbourne’s western suburbs, supporting our community’s health and wellbeing, and open to all.

Ben, a Footscray-based choral conductor who is soon to complete his PhD on the subject, wanted to explore some of the things he’s learned about building inclusive communities through singing. Chris, an accomplished pianist, teacher, accompanist, and piano performance graduate of the Melbourne Conservatorium of Music, was enthusiastic too!

Ben explains the research about why choir singing is good for you:

“Research tells us it’s good for our breathing, posture, it improves muscle tension and can decrease respiratory symptoms. Singing can alleviate pain and activates neurotransmitters such as dopamine, for pleasure and alertness, and serotonin, for euphoria and contentment. Singing boosts our immune systems and modulates the stress hormone cortisol in our system. Singing together goes one step further. Group singing fosters our sense of happiness and wellbeing – something with proven mental health benefits. Plus our heart rates align – it’s a very healthy medicine!”

Ben and Chris founded the choir with four values in mind. It would be an inclusive place, where members would not need to audition, nor be able to read music. Ben, an experienced community choir leader, believes everyone can sing if given the right support and conditions.

Says Ben, “Singing is a cultural phenomenon and, unfortunately, in Australia there’s a view that it’s a special skill available only to a small group. I’m keen to change the ‘but I can’t sing’ culture here!”

The choir door would be open to all: a place without judgement regardless of age, education, cultural, ethnic, or socioeconomic background, ability, gender, or sexuality. The choir would live out these values by reaching out to some of the most marginalised members of our Western Suburbs communities.

Individuals living in Australia on bridging visas would sing for free and it would build close  ties with the Footscray-based Asylum Seeker Resource Centre. The choir would be a place of optimism and hope – a joyful moment in the week and an injection off positivity and fun at the end of the working week!

An important element for the choir was its performance goal – an end-of-term performance for family and friends. “Performing challenges members to develop confidence as singers and performers and in my experience brings the community together in a very special way,” says Ben. The choir’s first show, One Voice, provided 13 members the chance to perform to a cheering crowd.

In March 2017, the Never Turning Back concert featured a choir of nearly 20 members performing to a full house at the FCAC’s Basement Theatre.

The performance also featured special guests Musical Journeys, the ASRC’s music group, and an opportunity for both groups to sing together. The two shows raised awareness of the ASRC’s great work.

After three terms, Chris and Ben are looking to set the choir on a more sustainable footing, and are keen to find partners and sponsors who can support their work. In the meantime, the choir’s Term 2, 2017 concert will be held at the FCAC Basement Theatre on Thursday 15 June at 7.15pm. For more details, go to: https://www.facebook.com/footscraychoir/