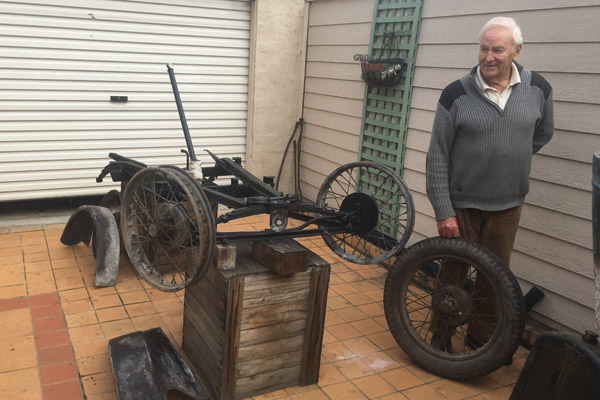 When it comes to cars, but not just any old cars, my uncle Ian, or Wullie, as he is affectionately known to family members, is a living legend. For over half a century he has been restoring veteran, vintage and classic treasures, with a couple of Douglas motorbikes thrown into the mix. In 1959, Ian restored his first car, a 1915 Maxwell; with a booming horn that scared the living daylights out of my youngest son, and a regal body, the Maxwell commanded the open road. When we travelled in her we felt like royalty and she took pride of place in Ian’s motoring stable for fifty memorable years. What a grand old lady she was.

Growing up in Kingsville, Ian’s love of motorcars started at an early age when he began tinkering with the family’s Morris Cowley. With the help of his father and a family friend, he tackled some repairs that would have sent the best home mechanic running for the hills. The rear axle was fixed, the worn out clutch was replaced, and he even managed to give old Morrie a new head gasket to keep her ticking along smoothly. At the age of fourteen, Ian’s mechanical knowledge of cars was way beyond his years and his journey of giving so many of them a new lease on life had begun.

One of his more cherished restorations was that of a 1929 ‘baby’ Austin Seven. In the late 1960’s it came home on a trailer in a multitude of parts and Ian’s first remarks were, “I really should take it to the tip”. Thankfully my auntie replied, “No you’ll do something with it”. Over the course of a few years a little Orange jewel rose from the ashes, giving Ian and my auntie many years of motoring pleasure. They went on some epic rallies crossing state borders and clocking up thousands of miles. To this day Ian regrets parting with his beloved pride and joy, but as fate would have it, in decades to come there would be another baby waiting in the wings for him to restore. 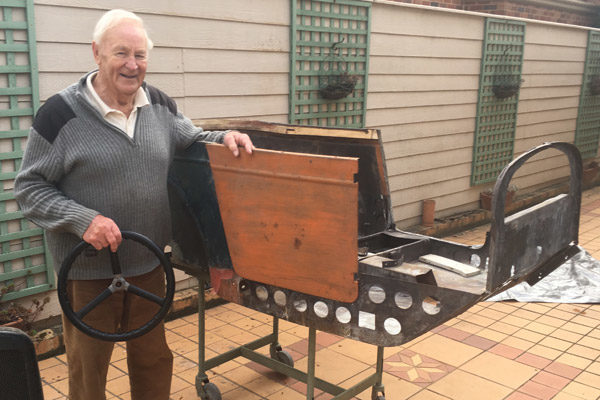 In the 1970’s, 80’s and 90’s, the motoring stable cranked out some magnificent specimens. A 1925 Vauxhall, a 1969 E type Jaguar, a 1949 Renault, a 1985 Porsche 911 and a 1953 MG; to name a few. The Porsche came all the way from America and not only did Ian restore the ravishing beauty to its former glory but he converted it to a right hand drive. Each car that was meticulously restored had its own unique story that Ian could reel off with ease. They all had one thing in common though, they turned heads wherever they went and left motoring enthusiasts gasping in awe.

Apart from cars, one of Ian’s other great loves in life is getting together with family and friends. There’s nothing he enjoys more than to talk about the good old days over a nice bottle of red. Such was the scene in August last year when he got together with some former work colleges at a Southbank restaurant. Inevitably the topic of conversation turned to cars and went something along these lines “Do you regret selling any of the cars you restored Ian? “Yes I do, the little Austin 7 is the first one that comes to mind”. “My brother and I have one you know, we’ll put it back together again one day”. “With all due respect Alistair, I don’t think that’s ever going to happen after all these years. I’ll take it off your hands; I’d like to buy it from you”.

On a hot January afternoon this year another baby Austin in a hundred and one rusty parts and pieces came home on two trailers to Ian’s place. It was definitely a case of déjà vu. It had been left to Alistair and Doug by their uncle who had used it around his property as a farm hack. The little work horse had endured a tough life. This time though there was no contemplation of it going down the tip, this baby was here to stay. It may well be Ian’s ‘piece de resistance’ of restorations.

Ian reflects on his latest little treasure. “So far no one has said I’m a silly old fool, for taking on this project. I’m making progress with it and I’ve got no emphasis on the completion date. Most days I do a little bit of work on it. I find a piece, clean it up, and put it on the chassis. I may be the receiver of a treasure or a heartache, but basically I’m bringing a little car back to life again”. Such poignant words from a man that has spent a life time tinkering with the humble motor car. Just like the first Austin that he restored, this little gem will require the same amount of patience, dedication and perseverance to see it rise again from the ashes. Rest assured Ian, no one would ever contemplate calling you a silly old fool, the family all think you’re an absolute legend.

SPOTSWOOD AND SOUTH KINGSVILLE GETTING A MAKEOVER