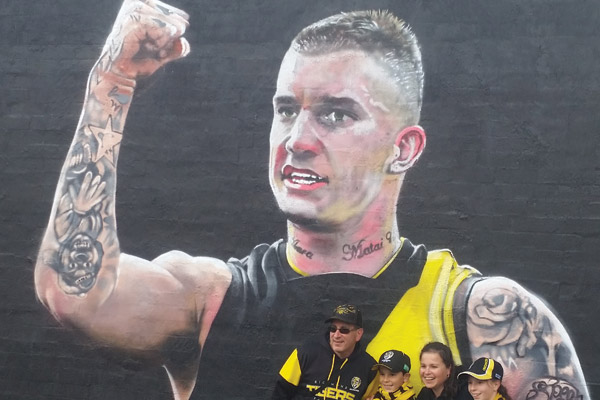 ”Footy, bloody football!” This is what I can recall, from days when I was closer to the ground. Somewhere in suburban Melbourne, my late mother’s words still resound. Parochial Melbourne, in our great nation of Australia, is the world epicentre of Australian Rules Football.

At certain times of the year, the media coverage of Aussie Rules reaches saturation level. This pleases a lot of Melbourne’s citizens. They are conditioned from birth to be football tragics, to support ‘their’ team, to be loyal from the cradle to the grave. They bring their children up the same way.

Some extreme characters make up this football league of Melbourne. They are football fanatics. My late ex-husband was a prime example, he took it to the max. If Collingwood lost a match, or did not make the finals, he would roar off in his car, threatening to drive into a brick wall. “Bye!”

Even women can be football tragics. Years later, I met a sweet, little old grandma at football matches, a regular. This dear old soul decorated the local church’s altar with flowers on Sundays. So blessed.

But she had white line fever at the Aussie Rules. Loyal. At three quarter time, she would groan, hold her head in her hands, and moan, “Who told these f…ing morons they could play football?” A good, sound, rhetorical question. No response, as the cheer squad, sitting nearby, tried not to shoot themselves, cheerlessly. Let alone eat all their flags and banners.

Yes, the football supporters constitute a large portion of parochial Melbournians. Why, in latter years, we are enjoying a public holiday to celebrate the Grand Final, for footy finals fever and glory.

On Grand Final Day, these football fanatics eat a ritual meat pie, gaze at football on television, and temporarily support any team, so long as they are Victorian.

In contrast, there is an Anti-football league of Victoria. They also belong to a tribe called the AFL.

This group originated in Melbourne in 1967. These anti-footballers strive to be immune to football fever, particularly in September. Such non-adherents regard the Aussie Rules as condoned thuggery, and seek to ignore its ‘pernicious’ evil effect on the fabric of Melbourne society.

Anti-footballers do support any non-football activities, hobbies and pursuits. They aim not to participate in any football discussion, such as the classic Melbourne greeting, “Who do ya barrack for?” From an anti-footballer, this query brings a sarcastic answer. This tribe regard ignoring football as a total non-sport, which is food for thought. Anti-footballers are still recruiting increasing numbers.

Finally, there is a third segment of Melbourne citizenry. These people make up the ‘non-football league’. Many of these non-supporters live in a different world of their own. They may have migrated to Melbourne from overseas or interstate. They do not allow any of their offspring to play Aussie Rules, or any contact sport. To these followers of non-football, Aussie Rules does not enter their sphere of existence, a total ‘passover’ of their neurons.

Ultimately, this is the Melbourne, and football code, we all love to whinge about to anyone who will listen. We teach little children that we will give them a biscuit or a lolly when they utter these prophetic words, “Carn’ the Pies/Doggies/Blues/Tigers/Dees…” or any other team of choice. I have personally known football fanatics who met their maker swathed in football gear.

Would we have Melbourne any other way?