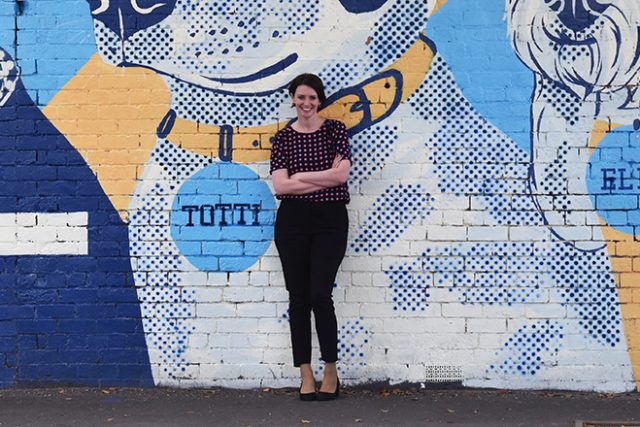 A year seems like a long time in politics, but all of a sudden our Member for Footscray Katie Hall MP finds herself celebrating her first anniversary in office. What better time to sit down and chat about it all with The Westsider?

So are we represented by a bonafide, fifth generational westie?

Ha ha my Uncle corrected me prior to my first speech in Parliament and said “Actually you’re sixth generation!” My father’s family on both sides all lived in the inner-west and we’ve had my great-grandfather who played for the Bulldogs and my grandfather also got a kick with them in the twos. They were doing alright in the 1950s!

Who has inspired your career in politics?

My great-grandmother Linda Vipont is someone who inspired my interest in politics and community, and Vipont Street in Footscray is named after her. She was the City of Maribyrnong’s oldest resident when she passed away. Most of her life she was involved in the Red Cross – helping people when they arrived, refugees, just a very connected person. We’re very proud of her.

What was the first step?

My mum was a public school teacher for her whole career including for a time in Footscray. I was a teenager when Jeff Kennett was Premier and schools were being closed. Mum always believed that education was the great leveller. I used to go to protests with mum and the occasional picket line. Both my parents were passionate about high quality education and what that can deliver to a community – that’s how I started to get into activism. When I was a teenager I used to help organise protests against Pauline Hanson when she was first elected to the Senate about 20 years ago. So I was involved in that sort of frontline activism. I then joined the Labor party and when I was at University I worked part-time as an electoral officer for Nicola Roxon.

You also worked with Julie Gillard?

Yes! Also worked with “JG” for a while, so two women who really inspired me. Women in politics, it’s getting better, the more women we get participating in public life, the easier it gets. I think Julia said that in her last press conference. It makes it easier for the next woman and the next woman. I’d never put myself in that realm but watching her at close quarters and her strength and resolve it was very impressive. But I do believe it’s getting better. We now have a gender neutral cabinet in Victoria for example, that’s a really significant step. There’s solidarity even with women from across the political spectrum.

What is it like making that transition from activism and protest to the next level of representation?

I don’t think anyone generally gets into politics without the right motivations but it absolutely can be bruising, I spent a good portion of my career not working in a political environment, in the not for profit sector; the organ donation service, at Victoria Police, the City of Melbourne, so I worked in a number of roles. But to me this is a dream job because I love Footscray and the inner west. I’m really driven to do the best possible job I can every day. I have the chance to do so much for our community, whether it’s school teachers or principals, or whether it’s the people who run the local SES, or the Rotary Club. What a joy! Really it’s an honour to fight for your community and every dollar you secure makes it worthwhile.

You originally contested pre-selection of the federal seat of Gellibrand. Did you conclude that you would be able to represent the inner-west better at state level?

I put my hand up to follow in Nicola’s footsteps, and I did that because I’m passionate about this incredible corner of Melbourne, but yeah, at this level is where we deliver the schools, and the hospitals, and a lot of the community infrastructure. So your life moves on. I have kids now, I look at Tim (Watts), I think it would be a really challenging thing to do, Canberra. Plus we all work really well together. I wouldn’t want to be doing anything but being the member for Footscray, I love it, every day is an adventure, we have little wins and I find that incredibly rewarding.

Even the Star Weekly described you as a “current government spinner” Is it personally draining working in politics and being a public figure?

One of things I didn’t expect was how social media can be such a difficult space to navigate. You know, people will say things to you online or anonymously or with that kind of distance they would never say to you in the supermarket or down the street. I found that challenging. I’m very fortunate in that I have two young kids, that my partner and my family have really helped support me on this journey. I think it’s important we have people of all different ages and stages in life in Parliament and that’s one of the great things about this government. You look around on the benches; we have people who are 25 through to someone in their 70s. Lots of women, lots of people that weren’t born in Australia, they bring that diversity of knowledge.

Is it challenging representing such a culturally diverse community?

No it’s enriching. My concerns, I have to be focussed on that Footscray has always been a first port of call for people who have come to Australia as a refugee, or an asylum seeker. We are rapidly gentrifying, and one of the things I’m determined to do is make sure that people don’t get left behind. Footscray has always been a hub for social services, I feel so lucky for the Asylum Seeker Resource Centre which is right near my office. The diversity is why a lot of people want to live here so it’s making sure we can keep it and invest in it and support those communities.

Your incoming platform statement included “reining in development and creating more open spaces” – how do you balance the Inner West’s population growth with current resident’s needs, as well as council’s plans, to ensure consistency and fairness?

One of things I’m advocating for in Government is for Footscray to have Priority Precinct status, so that we get the best strategic planning expertise to support council. What happened at Josephs Road was a disgrace; those approvals were made without developers being required to chip in. I don’t have a problem with well planned, architecturally sensitive developments that fit in with our community. Footscray is going to be a hub, having sensible medium density development is appropriate, it’s just making sure that the community infrastructure, the open space, perhaps the affordable housing component – I’m an advocate for inclusion zoning where developers should be required to contribute to infrastructure and community assets in developments like that. But Matthew Guy let them proceed without paying their fair share. That’s a social justice issue. We’ve got to get that balance right, because we are becoming more densely populated. If you want to go higher than the height control, then you’ve got to give something back to
the community.

What achievements are you going to celebrate after one year?

We are building the largest capital investment hospital in Victorian history in Footscray – 1 ½ billion dollars, and it is going to transform us, it is the centrepiece of the Victorian Government’s health platform. We’ve also secured record funding for our schools including the Footscray Learning Precinct which is at 8 million dollars and counting. Major rail upgrades, we’re going to have 60% more capacity on the Sunbury line when the Metro Tunnel is complete. There’s also things that don’t make the newspaper or gain that much attention. This week I announced ½ a million dollars for Maribyrnong Council to start doing food waste curb-side recycling, and this morning I rang someone in Braybrook to tell them we were going to provide $10,000 for the RampFest event. Shadecloths down at Footscray North Primary School, next week I’m going to be able to go to Footscray City College and tell them that I’ve secured $13,000 for them to get a new bike cage. There’s so much to be excited about.

OK time to get serious, what did (your dog) Maggie think about not being able to go for a latte or a craft beer in Footscray’s bars and cafes?

She’s disappointed! If Maggie could lobby the federal Food Standards Authority to change their code and secure the agreement of every state and territory, well… She’s a convincing dog, in the meantime she’s going to keep working with the bar owners to set up rear access to venues where possible. She understands that Council were enforcing the law.

And lastly, while we’re being hard-hitting, some of your favourite inner-west foodie and coffee spots?

Such a tough question! I love Addis Abeba, Sapa Hills, I like the tofu Banh Mi at To’s on Barkly Street. Saigon Pho for Vietnamese Soup and their vegetarian stock is outstanding! For coffee, oooh so many options, I actually really like the Footscray Donut coffee, and Milking Station.