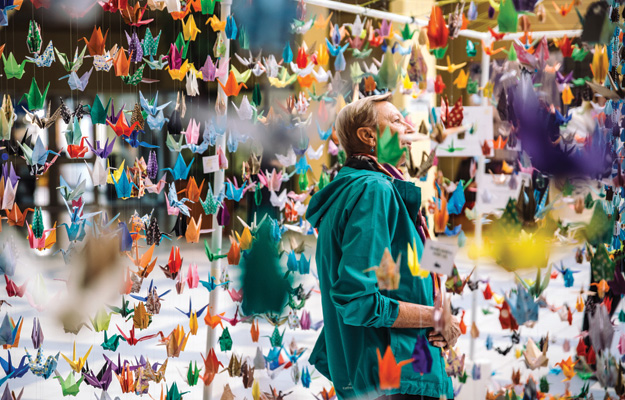 This pre-Christmas time of year is characterised by the clinking of cutlery on glass, the screech of a chair being pushed back and a florid but succinct (or so they think) speech by a relative, friend or colleague that encapsulates the past year and doles out thanks to the people involved in it.

Okay, so maybe these speeches are sometimes better left in the tipsy mind of their speaker, but the theory holds up; reflect on good things, thank those responsible for said goodness, look ahead to the future. Well, in 2018 Footscray University Town did a lot of good things with a lot of good people, and there’s more in store for 2019.

As always, the walls of VU at MetroWest – Footscray University Town’s base in central Footscray – have been consistently filled with an array of artwork as part of new or returning exhibitions.

To commemorate International Women’s Day, Come Together celebrated the creative work of women who have been a part of VU at MetroWest since its inception, while Sutueal Bekele and Magupela’s Perspective of Ideas was part of the Emerge in the West Festival. This year the annual Picturing Footscray photography exhibition and competition had the theme of ‘Old and new in Footscray’, and the inaugural winner of in Tertiary category of the Footscray Art Prize, Mohsen Meysami, returned with a solo exhibition.

As well as solo exhibitions by artists Heather Horrocks, Mia Salsjo, Debbie Qadri and Benjamin Cittadini, the work of Victoria University and VU Polytechnic students has been on show, first in PLAYLIST 2018, and currently as part of the annual VU Polytechnic Diploma of Visual Arts Graduate Exhibition, which will be up for viewing until just before Christmas.

As always, Footscray University Town was a driving force behind some major festivals and programs in 2018.

May saw the opening of the third annual Picturing Footscray exhibition, and with that the awarding of the main prize to artist and photographer Nathan Stolz. His winning photograph, Footscray Embrace, was exhibited alongside hundreds of other fantastic shots, including those taken by runners-up Pier Carther and Shannon McDonald, and People’s Choice Award winner Suzanne Phoenix. A huge thanks goes out to all of the photographers who entered this year – keep your eyes peeled for the 2019 edition!

The West Projections Festival was in its fifth year in 2018, with Victoria University and the Footscray University Town being involved in the past three Festivals. West Projections is the baby of local creative producer Chantal Wynter, and seeks to encourage and support local, national and international artists by engaging with public spaces through the medium of projection art. The festival spread its wings even further this year, holding pop-up projections and artist walks in Seddon and West Footscray. Central Footscray was illuminated by the works of over 25 amazing artists, who breathed new life into public walls, shopfronts, venues and everything in between. Chantal and the university receive generous help from a range of supporters, ranging from the City of Maribyrnong, to local businesses and The Westsider itself! Who knows where the light will stretch to in 2019?

In the space of two weeks this November, Footscray University Town staged two huge, Footscray-wide programs – the inaugural Learning on the Edge and the second ever One Night in Footscray.

Learning on the Edge was held across two days and encouraged people to, ‘Do, disrupt and discover knowledge’. The program, constructed to commemorate the Year of Lifelong Learning, featured a series of engaging events, including a hotly contested debate between ABC broadcaster and comedian Sami Shah and a group of local students, an array of intriguing and, in the case of Skunk Control’s Big Bangaboom!, explosive workshops at Skills Street and the mysterious In The Dark. In The Dark, held at VU at MetroWest, saw a group of brave participants engage in conversations with strangers in a completely blacked out space, devoid of the normal social conventions governed by sight and image. These experimental learning scenarios created inclusive learning environments in some of Footscray’s established and burgeoning venues.

Not even a day of rain could keep One Night in Footscray down. Following on from last year’s monumentally successful debut, this year’s One Night in Footscray showcased a huge assortment of exhibitions, installations, performances and live music at over 20 different sites and venues around Footscray. A new batch of Snuff Puppets roamed through the sites, as did Matto Lucas, the so-called Pointless Poet. Local bars like Littlefoot, Sloth and Josephine opened their doors to performers, while the streets were home to people like the Phoenix Youth music performers, Jonathan Homsey and even the Footscray Trugo Club.

The VU Polytechnic Diploma of Visual Arts Graduate Exhibition was opened at VU at MetroWest, with life-changing travel grants being awarded to Sophie Shingles and Ronald Ramos from the Fiona Myer Foundation.

It is impossible to do justice to the stunning effect that a night of activation like One Night in Footscray has on Footscray – so if you missed out, you’ll have to come along next time to see for yourself!

2019 will hopefully see bigger and brighter incarnations of these events, as well as the second ever Footscray Art Prize. The Footscray Art Prize is open to local and national artists who work across a variety of visual mediums, with a prize pool of over $15,000 on offer across five categories. Entries are already open, and will remain so until March 15 2019.

It has been a colourful maelstrom of a year for Footscray University Town, VU at MetroWest and the myriad of artists, performers, speakers and other contributors that have worked so hard to bring these and other projects to life. The aforementioned tipsy relative/friend/colleague would charge their glasses right about now, but here we’ll have to settle with a textual toast to all of the people that made the year so great.

ARTS AND CULTURE CRITICAL TO COMMUNITY

5 WAYS TO PREPARE FOR AN ART PRIZE