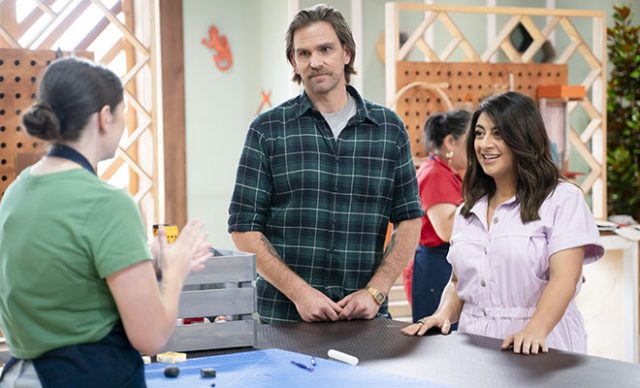 Be it decorating a Spoonville character to making sourdough bread, people have definitely become more creative in lockdown. Making It Australia, a new Channel 10 TV show, is celebrating our new appreciation of making things by hand.

Making It Australia is hosted by Yarraville local Harley Breen along with fellow comedian Susie Youssef. Makers will complete two challenges per episode, and the winner earns a coveted patch. Contestants also craft their way through the competition to earn the title of Master Maker and $100,000.

Each episode showcases the amazing artistic talents of regular Australians, such as pottery, macramé, crocheting and carving. There’s even a lampshade that looks like Chris Hemsworth! “It’s a joy explosion,” says Harley.

People may be familiar with Harley from shows including Hughesy, We Have A Problem, Taboo and The Project. He also co-hosted Sydney’s 2Day FM Breakfast Show and is an award-winning comedian.

Locals may also be familiar with Harley as a regular fixture around town. Originally from Queensland, he now lives in Yarraville and is a huge fan of Cruickshank Gardens.

Harley himself is quite the handyperson – a skill he admits is not often associated with comedians. He has created a few projects for his young family during lockdown. Regret that a chicken coop he made from scratch did not protect the chooks from predators. “I didn’t account for foxes!”

In this era of more lockdowns and stressful news, Making It Australia offers a family-friendly escape with fantastic visuals and a sense of fun. Harley says: “(Making it Australia) is built on a foundation of joy, and that’s what we really need at the moment.”

MASTERS OF THE UNIVERSE: REVELATION

THE HOUSE IS BURNING – ISAIAH RASHAD