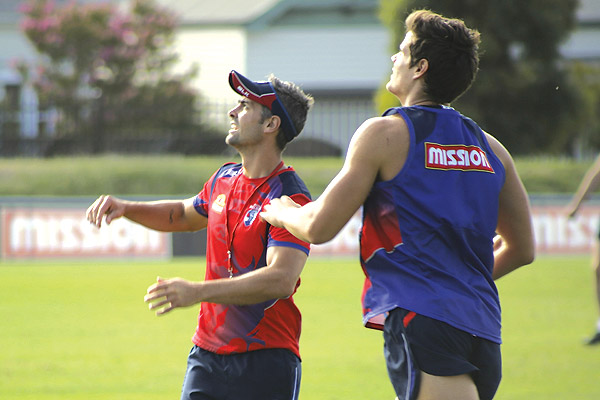 A few months ago, this columnist adopted a rescue dog: an Australian Bulldog. ‘Ozzy’ was a senior dog in need of a loving home. My three young kids and I fell in love with the rugged fella and we became a Bulldog family in another way.

Also a few months ago, my eight-year-old son hoped this season his beloved Western Bulldogs would be back to their best and make the finals again. All of us held those same hopes that last year was a just a strange mix of a premiership hangover and bad luck. Just a blip, surely?

Sadly, no. Season 2017 wasn’t a blip. The sons of the west have hardly come out snarling at all.

It was an ominous start to the season, with Libba doing his knee in the first quarter of the first game, and needing a second ACL reconstruction in three years.

GWS went on to thump a relatively listless team in that first game, and to be frank, the season since then has continued with a deepening sense of frustration, now reaching WTF levels.

The Dogs won just one of the first five games, against Essendon in Round 3. Three ‘wins’ then followed from round six to eight, though against the three then-and-now bottom rungs of the ladder in Carlton, Gold Coast and Brisbane, do they really count?

Those little victories were followed by losses against top eight contenders Adelaide, Collingwood, Melbourne, Port Adelaide and North Melbourne, and put paid to any realistic hopes of returning to finals this year.

It’s been another challenging year…

We know the acting skipper is a champion and while he’s on the field, there’s always some hope a slow start can be overcome.

The rookie-listed player has kicked at least one goal in every game except one this year.

Grandson of Collingwood premiership player Brian and greatnephew of the iconic Lou Richards, Ed’s flaming red hair and natural football nous are something to be very excited about.

Devastating after he was reported to be on fire during the pre-season.

Friendly fire in a pre-season match saw Picken concussed, and the effects have plagued him since. Hopefully he can return in the second half of the season, but that’s no certainty. Stay strong Pickers…

The skipper did his hammy in Round 13 and was thenexpected to miss 10-12 weeks, which is likely his season over.

1. Where’s the dash and daring that made the 2016 finals so exciting, and captured the premiership?

2. Why are Mitch Wallis and Luke Dahlhaus still not recontracted?

3. With other clubs playing the frenetic style better than us now, how has our game plan evolved (actually, has it)?

In both injuries and overall resilience, you can’t help but wish the Bulldogs were less of the brittle British, and more like the sturdier Australian Bulldog…