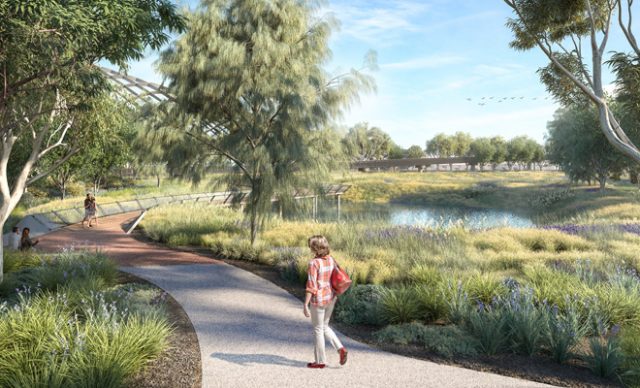 New landscaping designs have been released as part of the West Gate Tunnel Project’s plans to green the west, creating around four MCG’s worth of new open space and over 14 kilometres of new and improved cycling paths.

Developed with community in mind, the designs come after years of the project talking with residents in the west as well as consulting with the project’s Community Liaison Groups (CLGs) to find out what was important to people.

Jim Williamson, local resident and Chair of the CLGs, said it was great to see that the West Gate Tunnel Project actively sought out community feedback and incorporated suggestions into the landscaping designs.

“The West Gate Tunnel is not just a transport project, it’s a transformational project and it’s great to see that community feedback is helping to shape the design of the new open spaces to be enjoyed by generations to come,” Mr Williamson says.

“The community was very keen to see a focus on native plants, with species that would both compliment and adapt well to the existing local environment.

“There was also a high interest in what would happen to project construction sites once the West Gate Tunnel Project was complete, and how these could be turned into something we can use for many years to come.”

At Hyde Street Reserve and Stony Creek, the project will transform vacant industrial land into new open space and complete the missing link in the Stony Creek shared use path.

Beside the West Gate Freeway, former industrial land near New Street in South Kingsville will become a unique nature play space, with a playground built partly from reused natural materials. The play area will be idyllically set amongst boulders, indigenous vegetation and embankments.

Looking to Kororoit Creek, the Federation Trail will be completed along with missing links in the Kororoit Creek Trail. The history of the area will also be celebrated, with the original bluestone bridge on Old Geelong Road highlighted through new interpretive signage.

In the Moonee Ponds Creek area and under CityLink, unused rail land will be rehabilitated to provide more green open space, a BMX track and a new walking and cycling bridge over Footscray Road.

Read more about landscaping designs in your area and check out new artist impressions at  westgatetunnelproject.vic.gov.au.